Magic and science snapped, crackled and popped at the Rex Restaurant in Billings this week. Executive Chefs Nick Steen of Lone Mountain Ranch and David Maplethorpe of Rex Restaurant pulled more than steak out of a hat for the Montana State University (MSU) Billings Foundation kickoff dinner for the 23rd Wine and Food Festival. The Guest Chef Dinner, appropriately named “Modern Montana” used more than just fire to create the feast served to 84 guests from passed appetizers to a five-course meal.

Once again, proprietor Gene Burgad generously closed down the dining portion of his iconic restaurant to start the weeklong fundraising for scholarships. For many years, Maplethorpe has teamed up with a guest chef to cook a multi-course meal, and this year Steen, accompanied by Chef de Cuisine, Josh Cannon and the Lone Mountain Ranch kitchen staff joined in the fun. 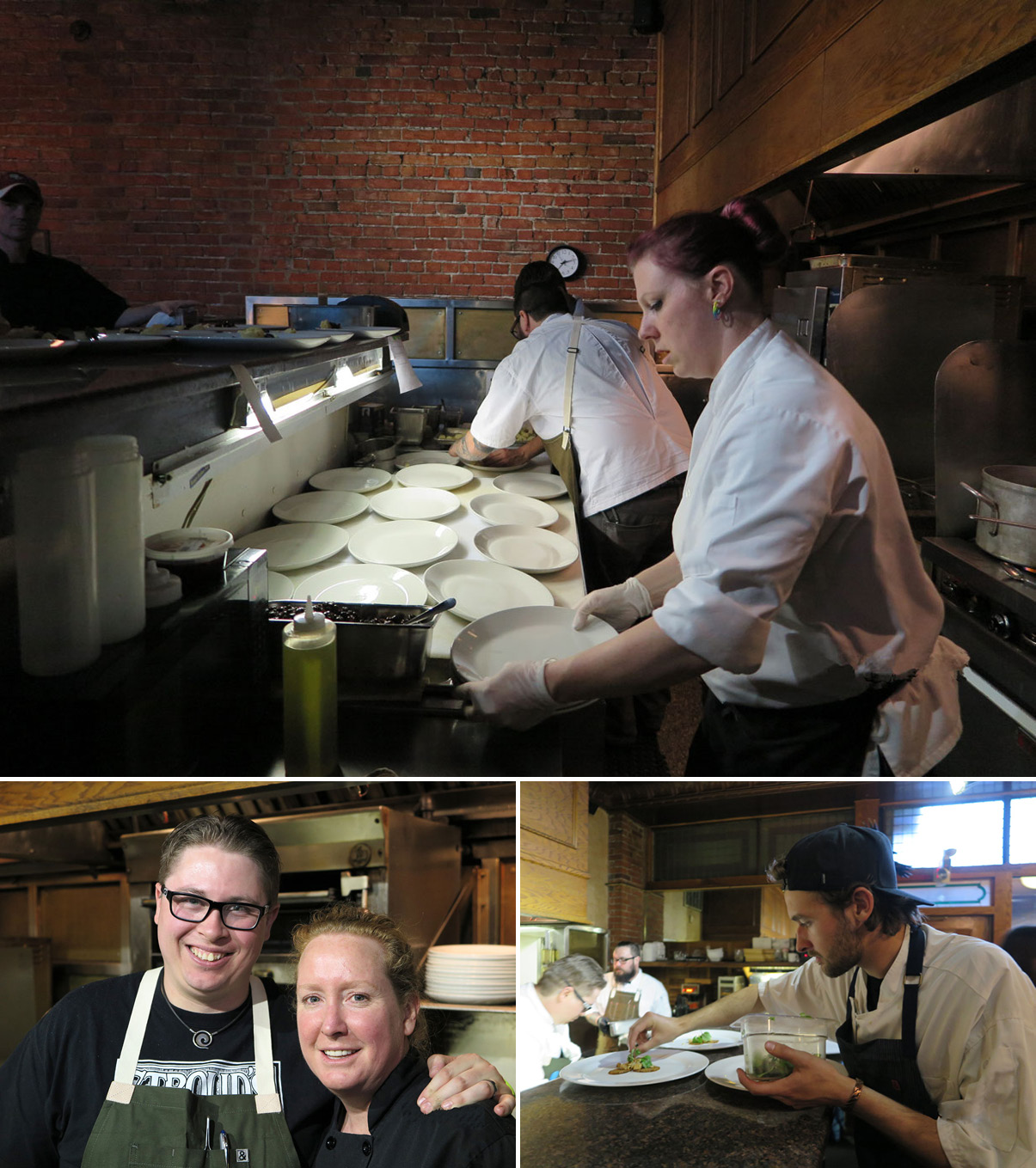 In a time when “eating local” is a popular cooking trend for many chefs, “stratospheric” may more aptly describe a meal that began with ‘Foie Gras Mousse. Pickled Pistachio. Pop Rocks. Nasturtium. Brioche.’ Steen said, “You have to cook daily, not seasonally. You can get morels and capitalize on them,” but he obviously embraced all possibilities and availabilities in our vast world. The brioche was flour, sugar, egg, and cream mixed in a canister injected with nitrous oxide. The dough was then squirted into a punctured paper cup, and then microwaved with the result of a soft, ethereal cakelike bread. With the mousse and brioche, heavenly velvet slipped onto the palate only to be enlivened with the explosion of watermelon flavored pop rocks, the peppery notes of the nasturtium leaf, and the savory and sour nuances of the pistachios. 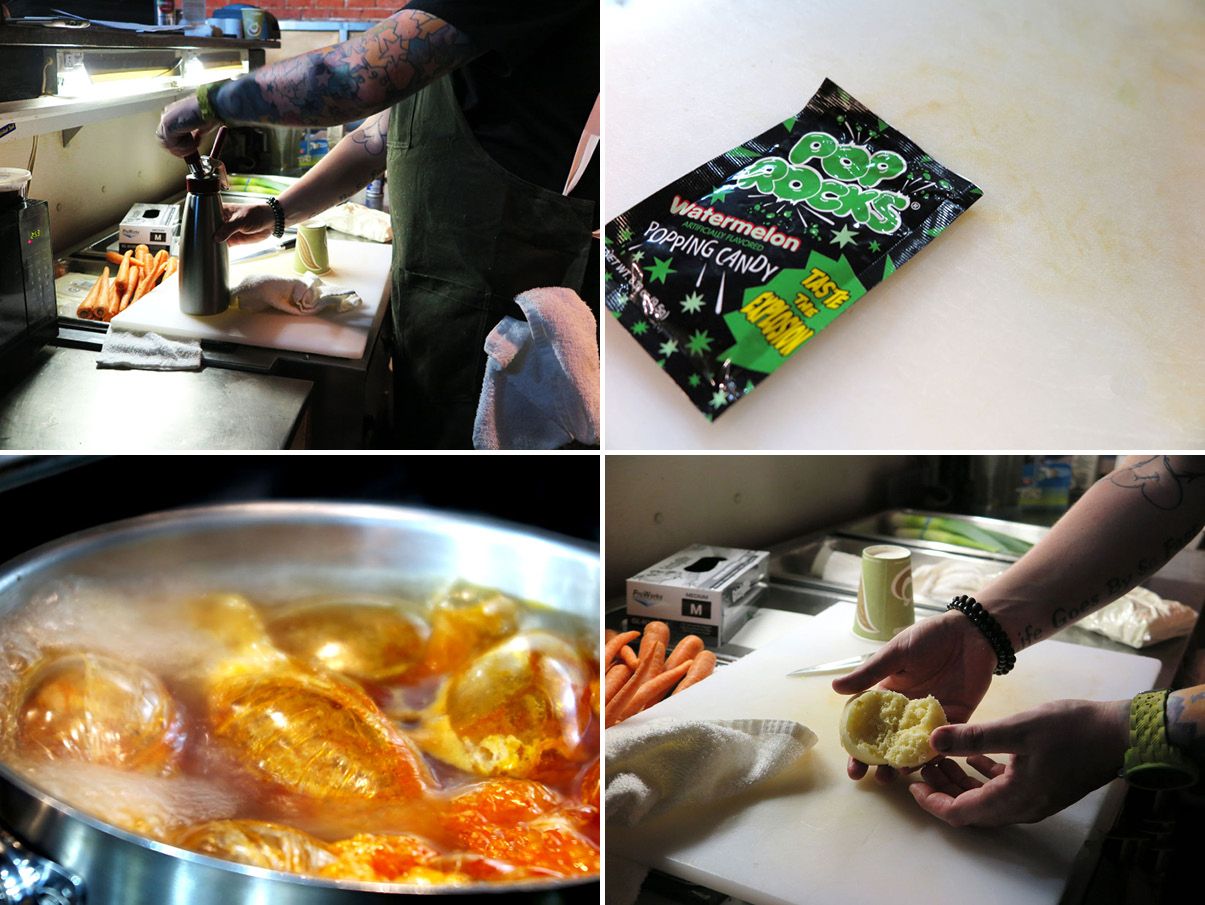 The second course featured Steen’s own cured chorizo with scallops while the third course ‘Braised Pork Cheeks. Charred Leek Ash. Chocolate Lentils. Carrot Chips.’ featured leeks charred on the grill, blended and then pureed with liquid nitrogen to form cold crumbles fanned onto the plate. Steen believed, “The charred leek ash melts onto the plate so who needs demi?” referring to the tradition demi-glace that accompanies meat. The pork flaked off easily with a fork to be enveloped with a chocolate sauce, speckles of lentils finished with the crunch of crispy carrot chips. 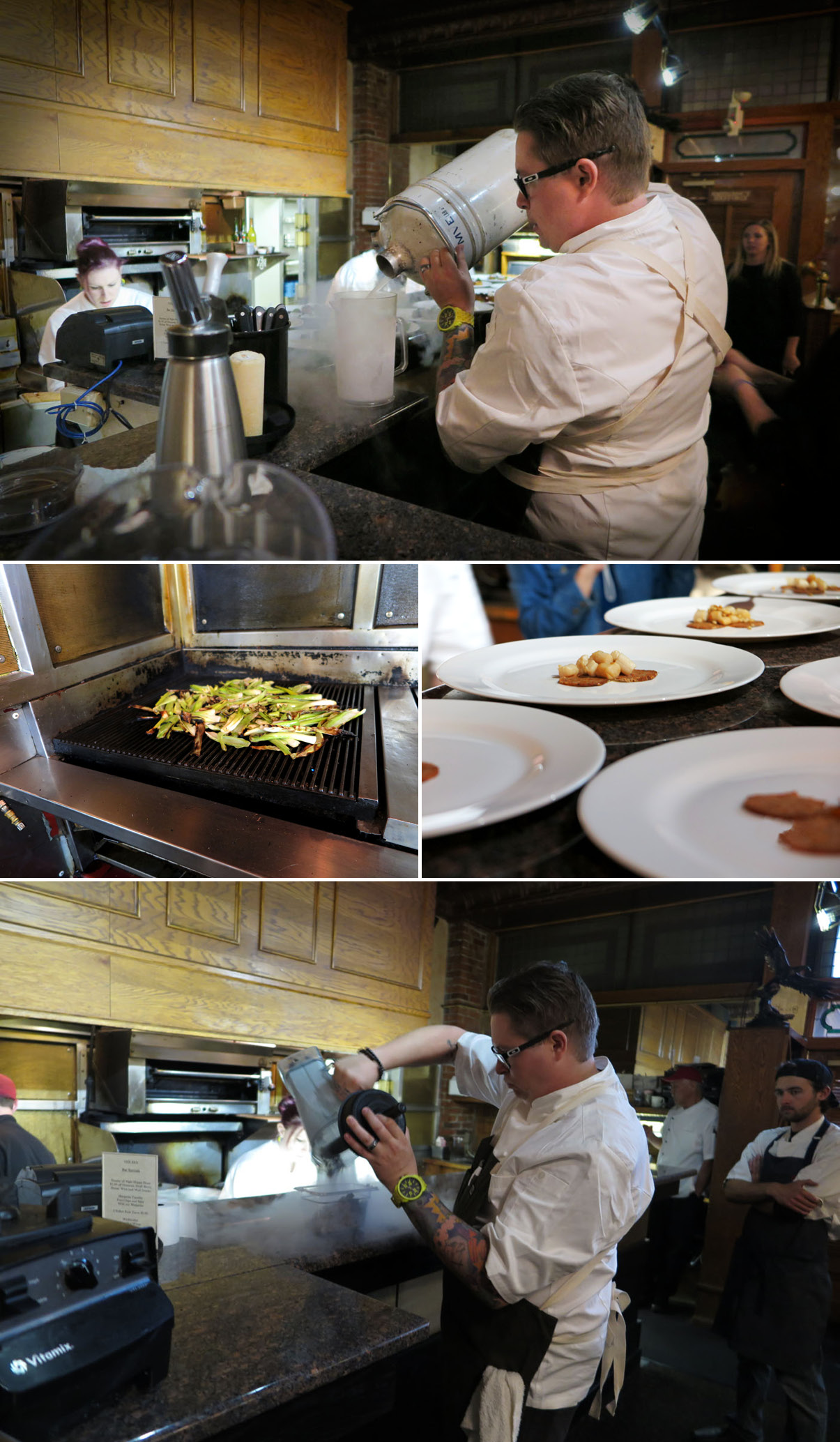 Executive Chef Maplethorpe defied gravity with his ‘Sous Vide Tenderloin, Sauce Bordelaise with Asparagus and Pommes Frites.’  Maplethorpe’s fare at the iconic steak and seafood establishment honors traditional cooking so using water to coax meat to doneness breaks the mold. His step into modern cuisine produced meat that dissolved in the mouth.

Guest Carol Spielman said the meal “uncorked a sensory experience for our under-indulged palates! It was exciting and absolutely delicious!”

The collaboration of Steen, a young chef who once majored in cell biology and neuroscience with the seasoned Billings chef, Maplethorpe with help from Executive Chef Marlo Spreng of Walkers Grill resulted in a “stratospheric” meal that brought Montana cooking to a new level of snap, crackle and pop.

Stella divides her time between Billings and Seattle, Washington attempting to perfect her sailing, building her running legs and constantly exploring new food and drink. Her radio show, Flavors Under the Big Sky: Celebrating the Bounty of the Region, airs on Yellowstone Public Radio. She has written two books Historic Restaurants of Biliings and Billings Food and her articles have appeared in The Washington Post, Big Sky Journal, Blue Water Sailing, Fine Cooking, and Cooking Light. She regularly contributes to the TASTINGS section for Yellowstone Valley Woman magazine. Through the Montana State University Wine and Food Festival, she continues to share her love of wine and food by teaching the Wine Studies classes. You can read more about Stella on her blog that explores all things "under the Big Sky on land and water” at stellafong.com.

Snow on tree branches, kids laughing, tromping through leafless shrubs in search of the perfect tree—that’s what the weekend after Thanksgiving looks like for…