I had already moved away from my hometown, Missoula, by the time the James Bar opened and became my hometown bar. Let me explain. One of my best friends called me in New York City and raved that a fine and comfortable new place had just opened in Missoula with pictures on the walls of John Lee Hooker, Janis Joplin and my hero, Keith Richards (posed at the peak of his elegance and excellence in the early 1970s, no less.) 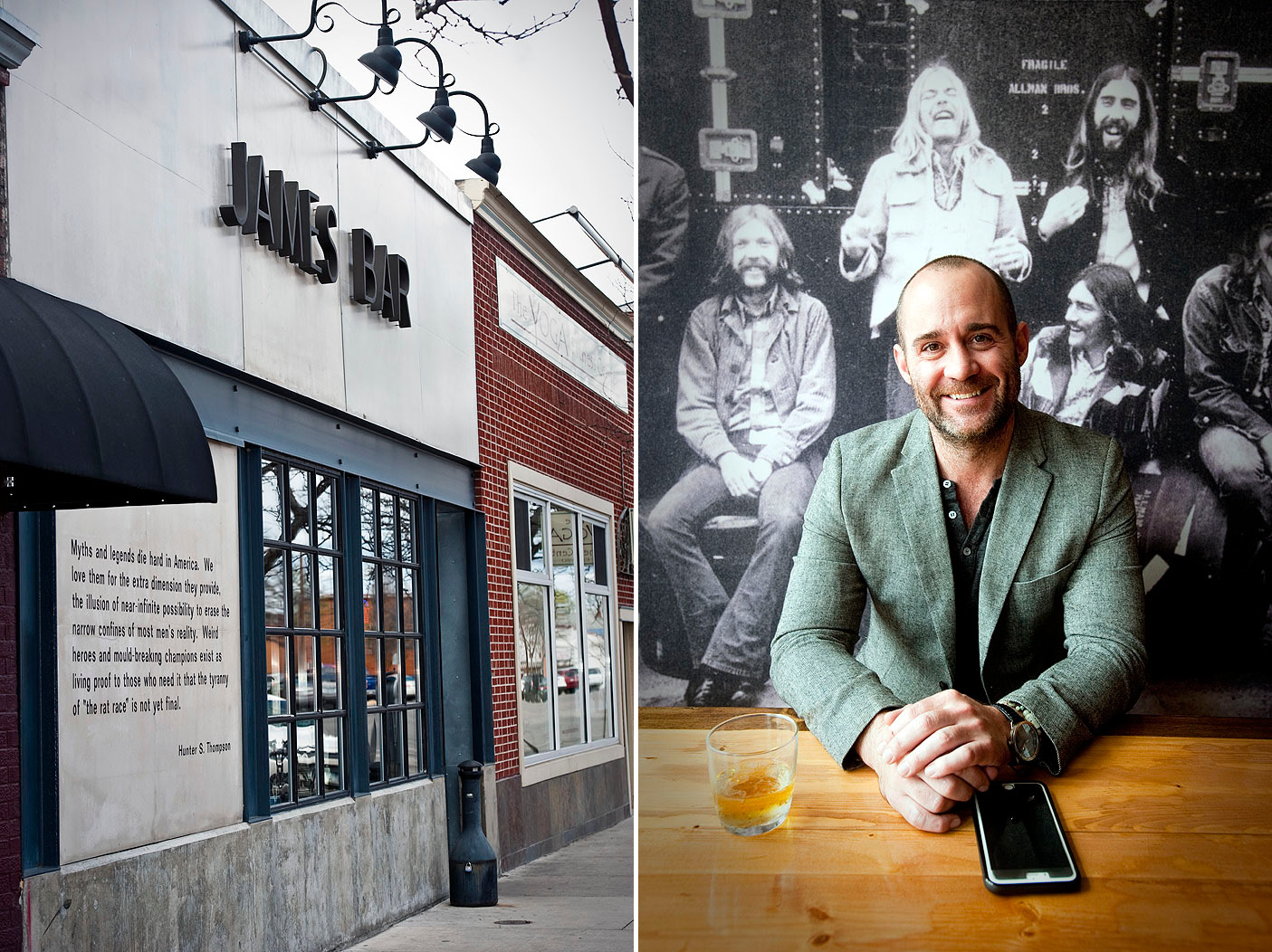 Invariably when I come back for visits now, I find myself listening for hours to dear friends, old colleagues and family inside the James Bar’s fetching interior of reclaimed wood and brick, or else out on its breezy, flower-decorated back patio.

On a recent summer visit, as I tucked into a savory buffalo burger and a kale Caesar salad with sweet red peppers, I had a chance to chat under a table umbrella on the patio with Executive Chef Noel Mills. He explained that what I was eating – buffalo ranched in Eastern Montana and vegetables farmed near Missoula – embodied the sensibility of the James Bar.

“We mix the strange with the familiar,” said Mills, 47. “We try to make everyone happy.

Meals at the James include sliders made of lamb, lobster, elk and buffalo; mac and cheese melted with smoked Gouda; and poutine, the Canadian dish of french fries slathered in brown gravy, onions and cheese curds.

Among the James Bar ‘s most popular dishes are the sweet potato tater tots, stew made with ground buffalo brisket, and a burger called “Aidenator” in honor of Mill’s son, Aiden. The Aidenator puts a fried egg, pancetta, bacon, aged Tillamook white cheddar, roasted tomatoes and Worcestershire sauce atop one, two or even three patties of grass-fed beef. The triple is an engineering feat made possible only with multiple skewers, Mills said. 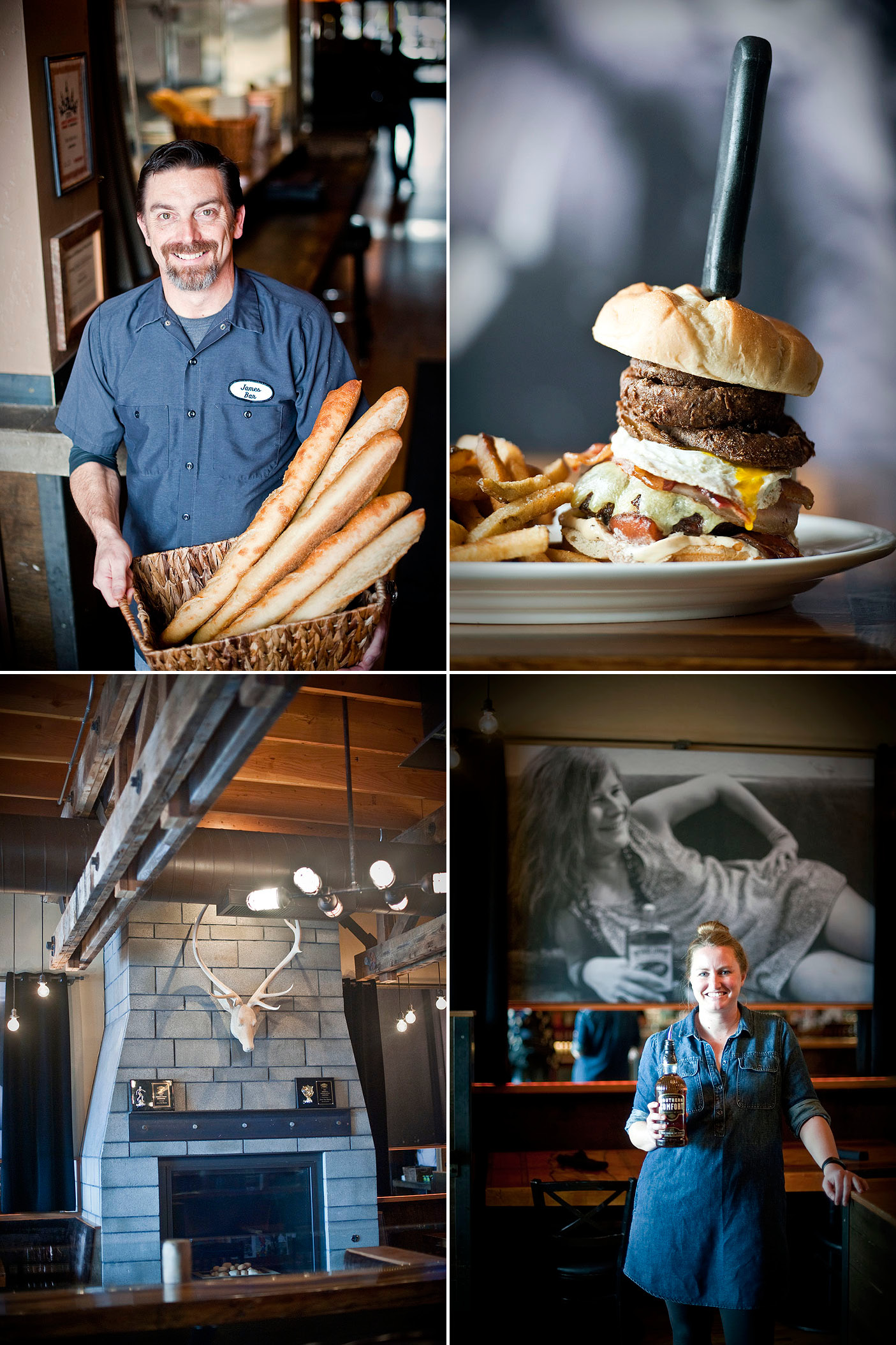 To pair with these modified comfort foods, the James Bar offers plenty of craft beers on tap. For years it has poured pints made by old Missoula pros, Kettlehouse Brewing and Big Sky Brewing. Now from the taps also flows an elixir of Bitterroot Valley apples, fermented by Missoula’s new hard cider producers, Western Cider. For spirits, James Bar mixologists shake and stir standard cocktails, like whiskey sours and Blue Hawaiis. Plus creations of their own, always evolving and morphing. Some go well with the baskets of purple and red flowers that decorate the patio during the summer. Others compliment the Hunter S. Thompson quote inscribed on an exterior wall that praises “weird heroes and mould-breaking champions.”

The 2,700-square foot James Bar was opened in 2007 by Chef Mills and Seamus Hammond, a graduate of Missoula’s Sentinel High School, and his mother Vicky Hammond, who with her husband Dick Scharte own the time-honored dive bar next door, Al & Vic’s (more than 80-years-old and hopefully still known to teenage wiseacres by the nickname I first heard, “Alcoholic Victims.”) The two conjoined establishments share a liquor license and, sometimes, clientele. When the James Bar opened town cultural critic, the late Jamie Kelly, wrote in the newspaper that it seemed, “designed to honor two sorts of Missoulians: those with class and those who’ve heard of it.

Thankfully, when I’m in the James Bar, I never worry about which category I’m in. I doubt Joplin, Thompson and Richards do either.

For the roasted tomatoes, preheat oven to 325°. Coat tomatoes, with balsamic vinegar, olive oil, and a pinch of salt and pepper. Roast for 45 minutes or until most of the liquid is reduced and the tomatoes are tender. Set aside.

For the Rasta rings, soak sliced onions in buttermilk for 20 minutes. Combine flour and jerk seasoning. Remove onions from buttermilk toss in seasoned flour and fry in 350° oil until golden brown, right before assembly.