I have great admiration for soft-spoken Lauren Oscilowski. While I’m no authority on gin and vodka, I’m immediately taken with her vodka, for the simple reason I know she has poured her best craftsmanship (and if you can bottle up love), into each batch of her spirits.

Lauren is a Philadelphia transplant, who found her way to Montana on July 4th, 2009. She’ll say the energy and the wholeness of life she was feeling provided the impetus to move from the big city. Just a few months later, she settled down in Missoula, supporting herself with a variety of jobs. She would eventually move north to the tiny hamlet of Coram to be closer to the mountains, and signed on as an employee of Glacier Distilling from 2011 to 2015. While there, she would take an online course from the Siebel Institute in yeast and fermentation. 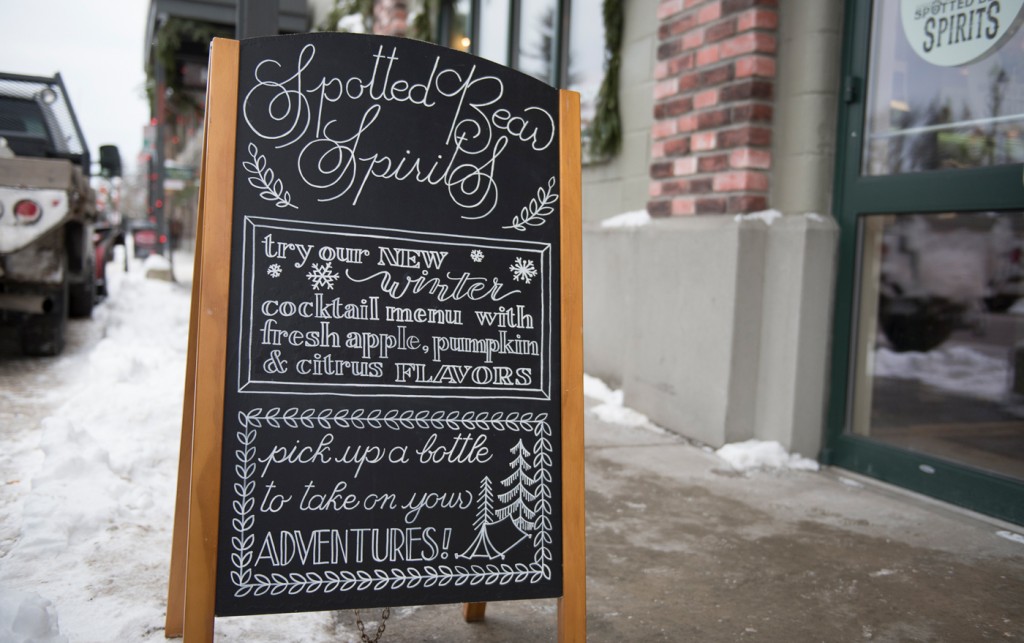 In 2012, she decided to pursue her dream of crafting her own spirits, and would eventually head west a few miles to Whitefish to set up shop. It was here in is this outdoor centric community that she opened Spotted Bear Spirits in January of 2016. Curious about the name, Lauren tells me she chose this name in honor of the Spotted Bear Ranger District, part of the nearby Flathead National Forest where Lauren loves to hike and explore. 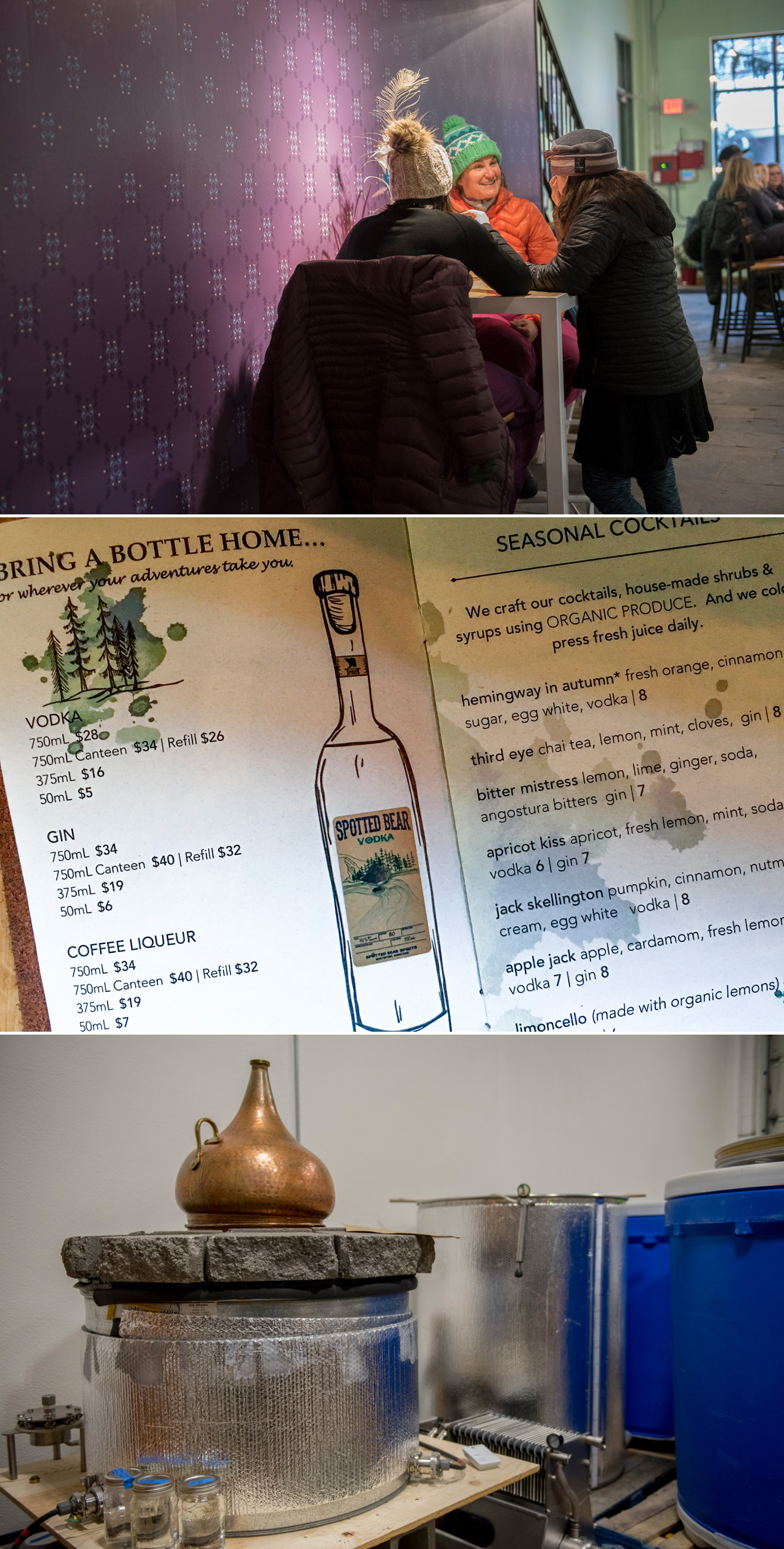 Through a large picture window in the tasting room with a view into the distilling area, I see Lauren sitting with her mason jars of botanicals, a notebook in hand, busy experimenting, calculating, measuring and crafting her concoctions. In addition to vodka and gin, she has produced both a Coffee Liqueur and House Cellos, her version of limoncello. Lauren is a firm believer in using locally sourced ingredients as much as possible. Nothing is off limits in the experimentation process for this “architect of alchemy”, including sage, yarrow, basil, rosemary, juniper, and wormwood to name a few. By April, she’ll be rolling out her latest concoction, Agave Spirits, her version of tequila (watch out Patron!). When asked what sets Spotted Bear Spirits apart from other brands, Lauren quips that brewing in small batches allows for more craft and love to be become part of the end product. 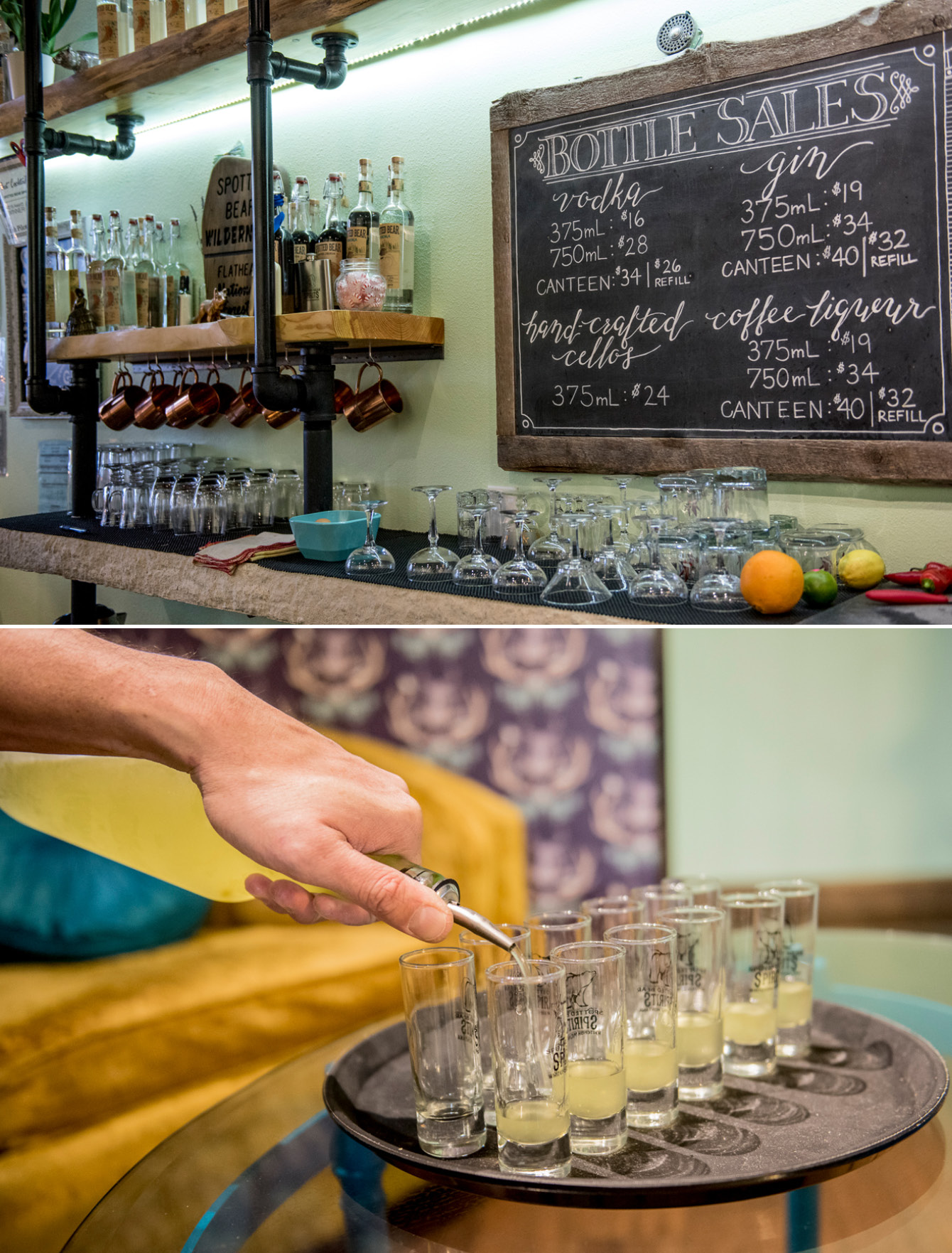 When asked if she is in competition with her former employee, Lauren answers “my competition is Gray Goose, Tanqueray and Tito’s. All the distillers in Montana support each other as much as possible.” Lauren declares it’s a celebration to see another distillery open within the state to help put a dent in the big boy’s competition. To date, a total of 18 distilleries operate within Montana.

Everything about Spotted Bear – from the website, the labels, the merchandise and the design of her tasting room, is cohesively branded with the help of Wheelie Creative, yet another Whitefish business standout. In fact, Wheelie designed the wallpaper that lines a few walls in her storefront, incorporating juniper berries (part of what makes up gin) into the artwork. Who knew you could design your own wallpaper and have it printed?  It’s clear from all of Lauren’s marketing efforts that pairing Lauren’s creations with Montana’s outdoor experiences is the right way to go. 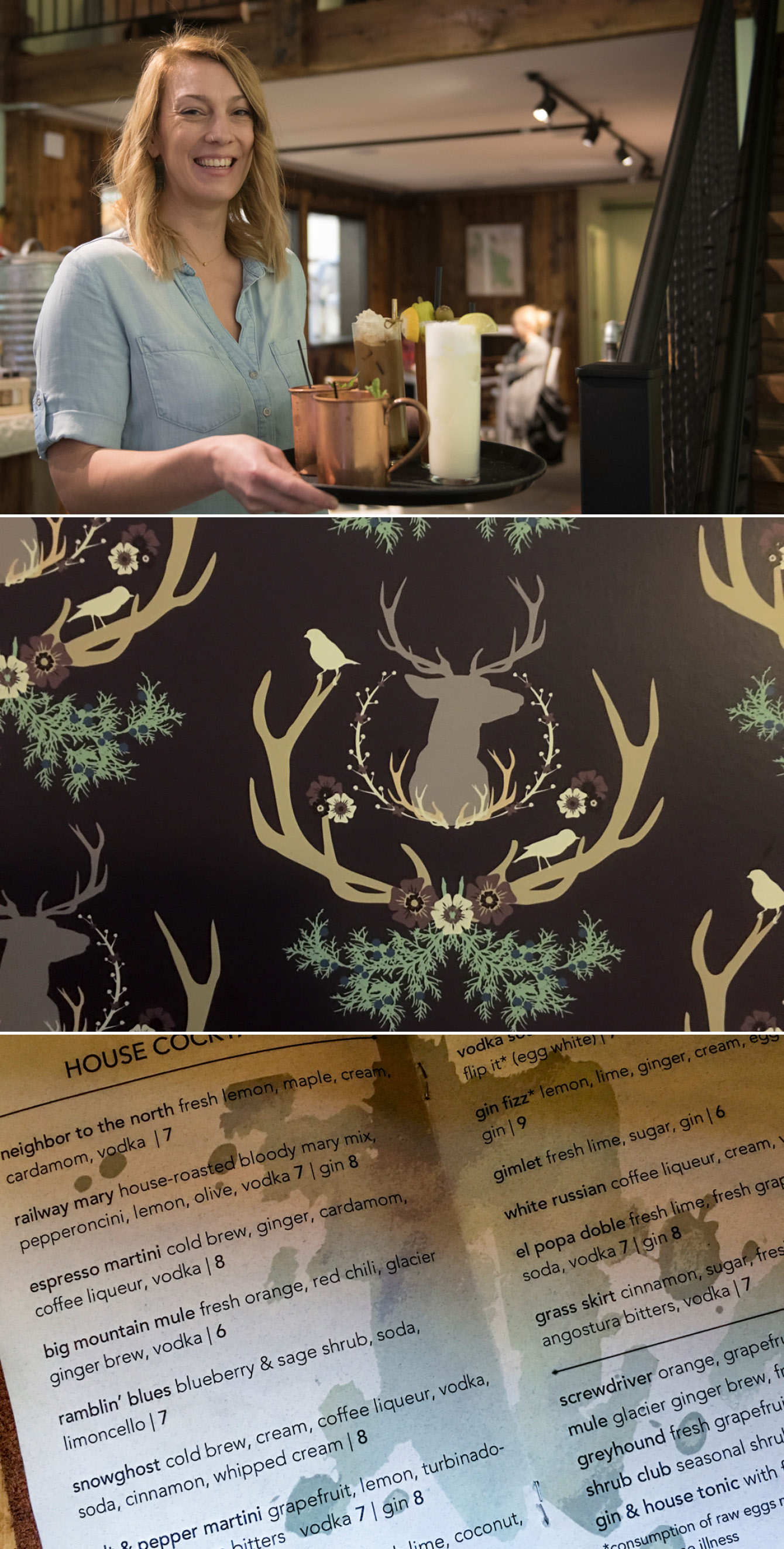 By five o’clock, it is standing room only in the tasting room on Railway Street in Whitefish. The local favorite is the big mountain mule, followed by my favorite, the snowghost (a concoction of cold brew, cream, coffee liqueur, vodka, soda, cinnamon and whipped cream). Watching the crowd, it’s clear that Spotted Bear has become a local gathering spot to linger with friends, whether you pull up a high back stool at the bar, or head upstairs to the cozy nook to relax. 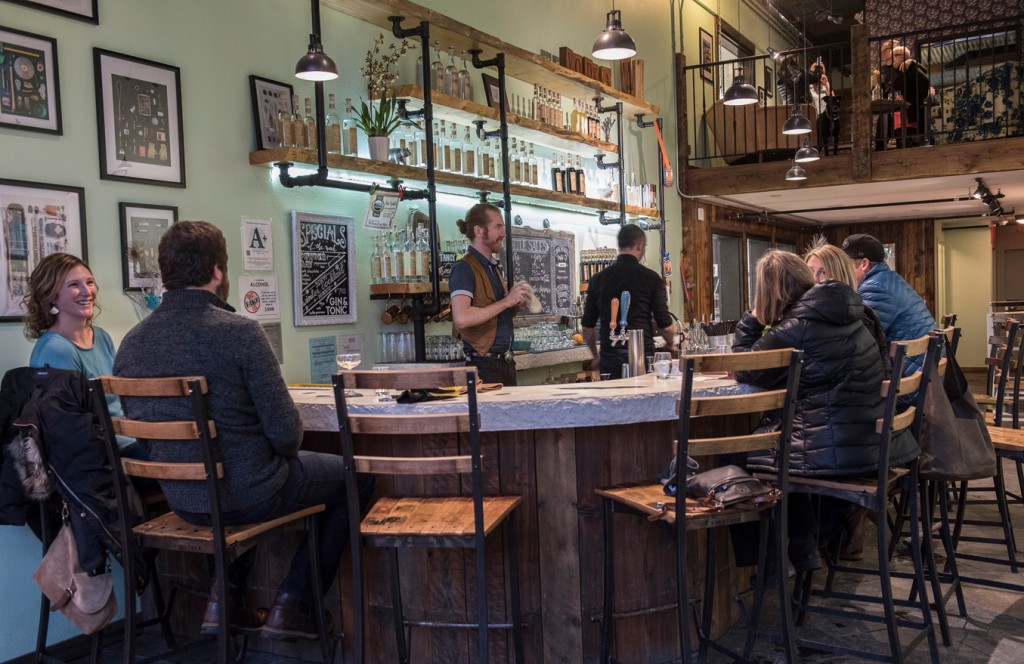 Montanans are generous about giving back and Lauren is no exception. Her Cocktails for a Cause evenings highlight a local cause. For every drink served, a dollar goes to organization working with Lauren on their particular fundraising efforts.

I’m curious about Lauren’s vision for the future. She hopes in three years to be able to open a separate facility for production and ultimately, see brands such as Tito’s replaced by her Spotted Bear vodka in all of Montana’s bars. She’ll say her business is just a small speck in a huge industry, but she has the perseverance to vie for top billing at Montana’s watering holes. By my estimation, Spotted Bear products are an easy choice today over big name brands simply because of the excellent quality. 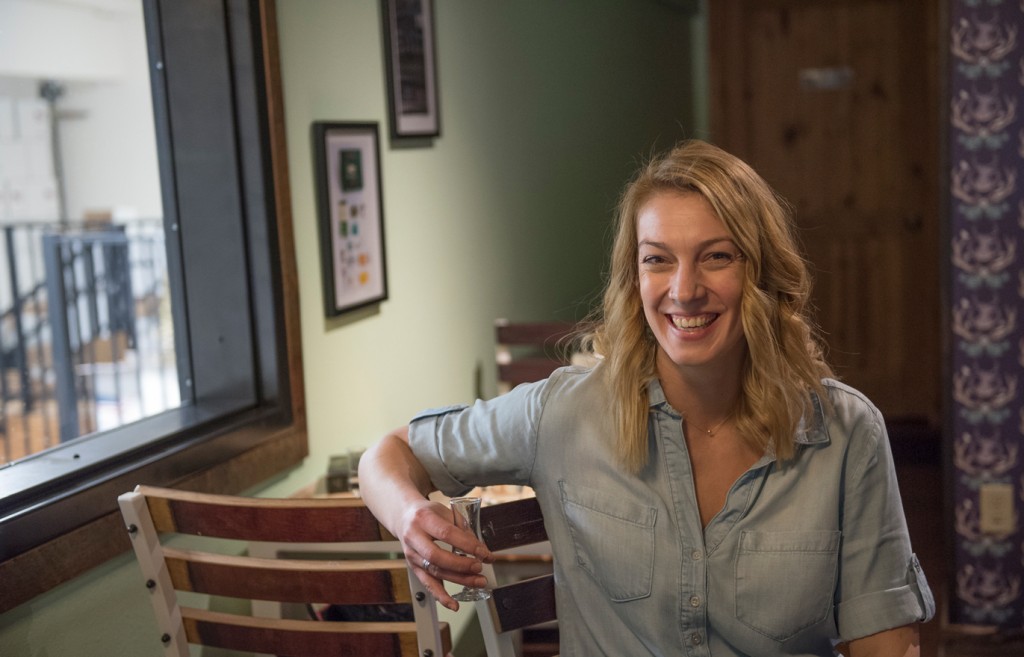 Regardless if you’re a lover of gin or vodka, or just want a down-to-earth setting to hang with friends, Spotted Bear Spirits should be your go-to stop if your travels find you in Whitefish. It’s the Montana way of supporting an unwavering entrepreneur. Kudos to this amazing woman who has planted her roots deep in Montana soil and has earned the respect of her community and fellow distillers for superior craftsmanship in the making of her various products.