No one expects to stumble upon a loft-like furniture showroom hidden inside an eastern Montana chapel—let alone one that carries mid-century modern armchairs splashed with bold Marimekko poppies or brushed-brass Atomic Sputnik Starburst light fixtures. Yet that’s exactly what customers discover when they step through the vestibule of Enchanted Living, a home furnishing store in the former Saint Matthew’s Episcopalian church on the corner of Towne & Meade streets in Glendive.

As you glide toward the down-filled Lexington couch perched on the chancel, the austere simplicity of the space still very much feels like a sanctuary. Rays of light stream through Gothic pointed arch stained glass windows, bouncing off creamy white walls. A red swivel chair punctuated with white piping sits in front of one of two kneelers by the alter. An alcove to the right of the vestibule holds a mint green leather high-backed recliner (which looks nothing like a recliner) whose sleek arms are trimmed with tiny steel studs. To find a showroom offering merchandise like this in Seattle or San Francisco would be customary. In Glendive? Extraordinary. 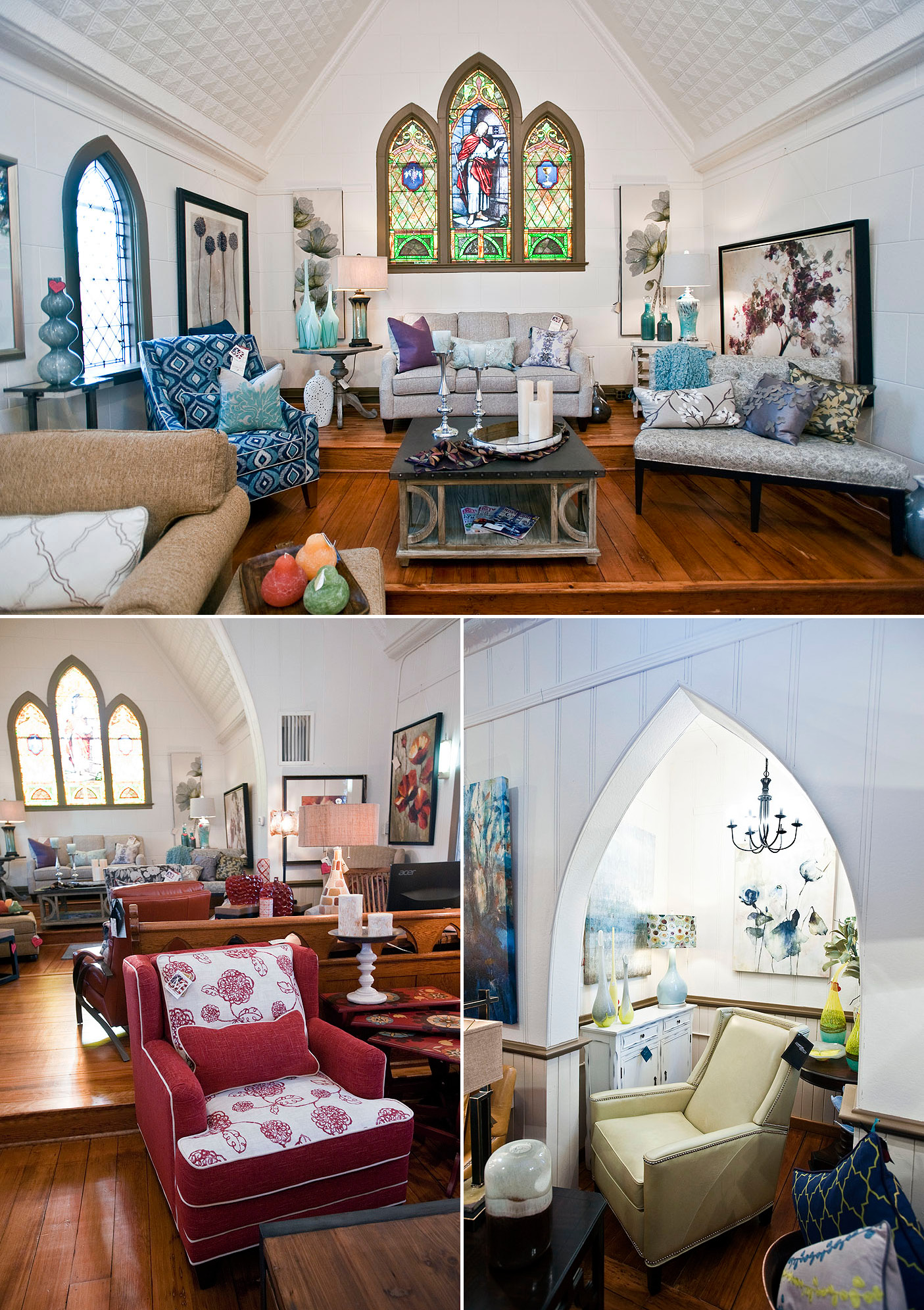 “A lot of people think ‘western’ or ‘rustic’ when they think of this area, and that’s just not us,” explains Laura Glueckert, who co-owns Enchanted Living with business partner Myrna Quale. The two were no strangers to retail when they opened the furniture sanctuary a little over four years ago, having launched a wildly successful fabric store and gift shop in 1995 called The Enchanted Room, which occupies a two-story Victorian cottage kitty-corner from the chapel. 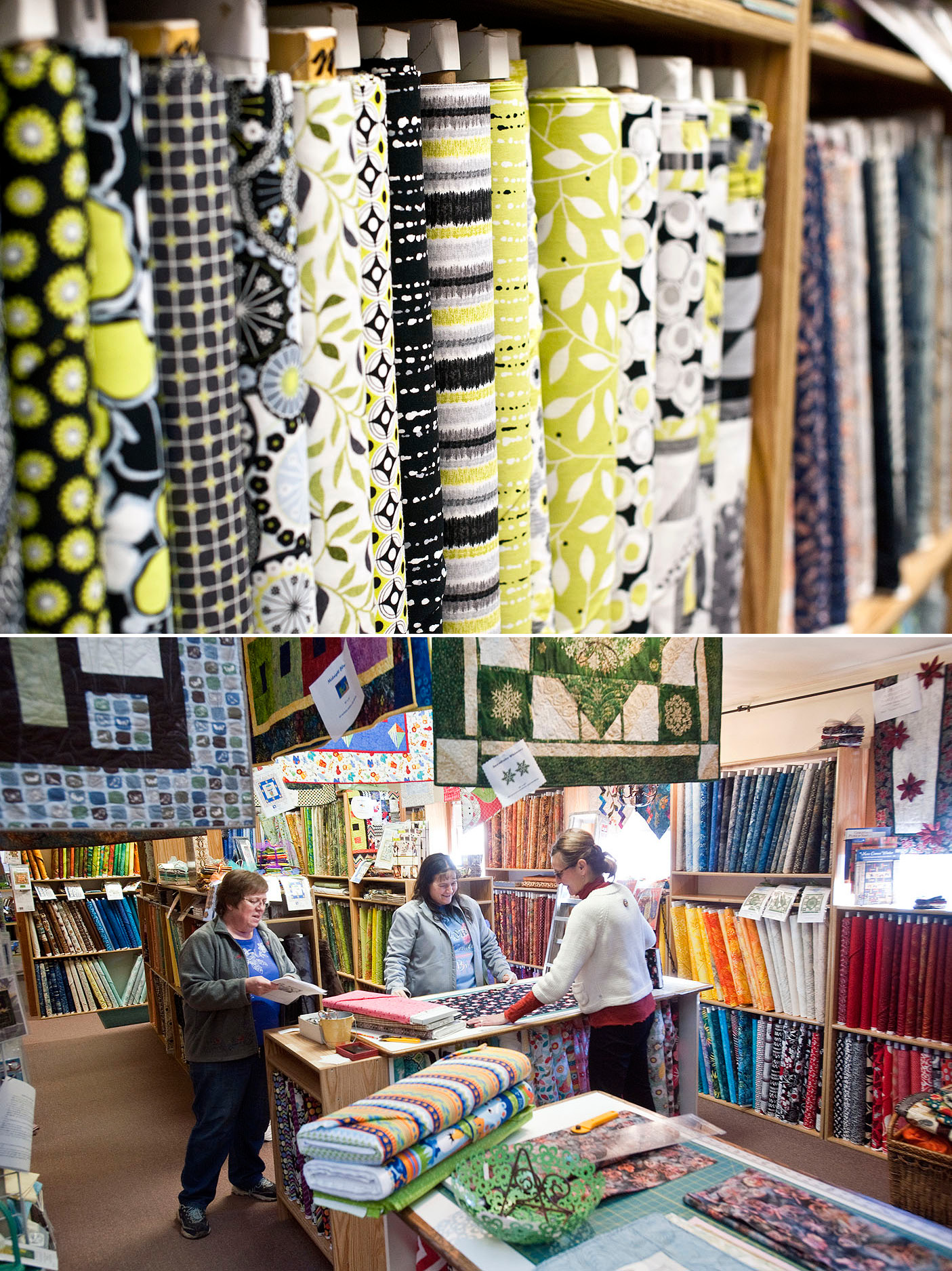 It’s evident that Myrna and Laura love home décor. “We’d go to market and see all of this beautiful, stylish furniture and think, ‘Wouldn’t it be fun to bring this type of stuff to our rural town?’“ recalls Glueckert, who grew up in Livingston and moved to Glendive with her husband Ray in 1982. “But we ran out of room. You need space to sell furnishings.” 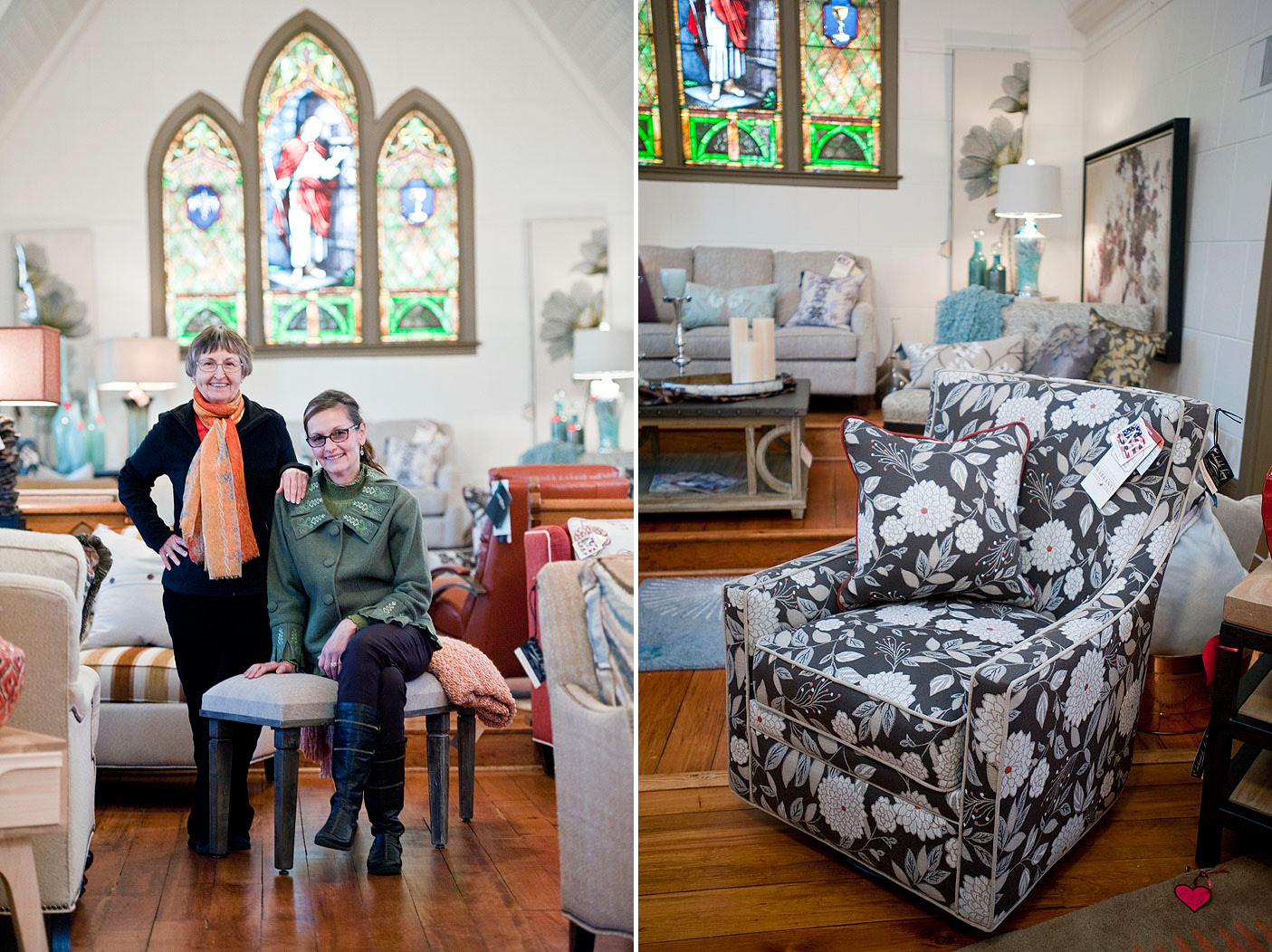 Out of the blue one afternoon, the two noticed church pews being removed from the little white chapel across the street. Though they’d both been inside, regular Sunday services hadn’t been held in years. “That building had so much potential,” says Glueckert. “It was so darn cute, and we knew it wouldn’t take a lot of inventory to fill up retail-wise.”

The next day, a realtor’s sign went up. They called the listing agent. Within a minute of stepping inside they submitted an offer. There was a little back-and-forth negotiating, but in less than an hour, Buy-Sell Agreement was signed.

Next came the renovation. Glueckert and her husband Ray had restored “every square inch” of their 1911 American Four Square home and were up to the challenge. Ray, a retired railroad worker, hammered away at the chapel four days a week; Laura joined him on her days off. 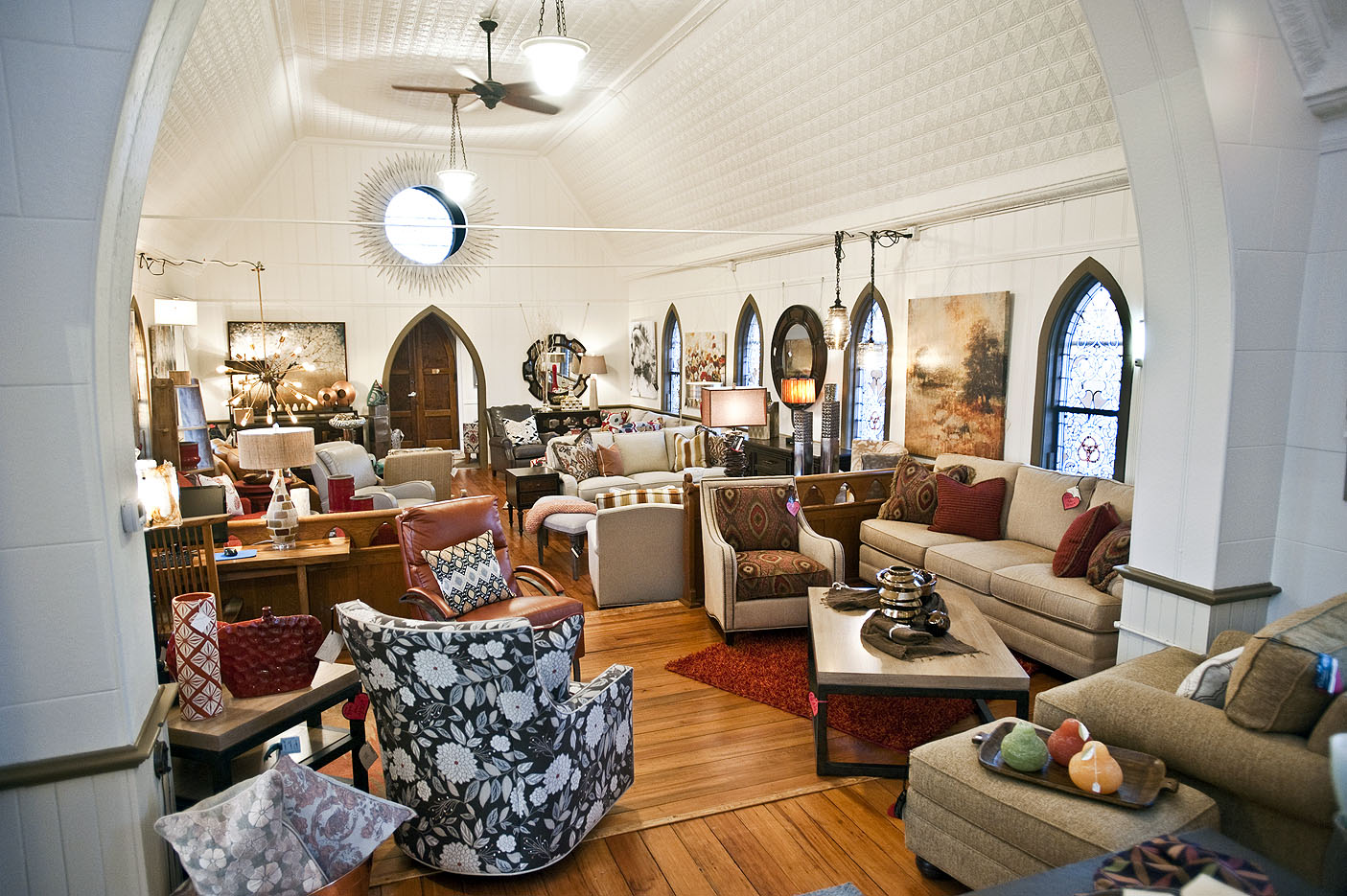 The couple started by removing truckloads of junk from the basement. They installed a new furnace, hot water heater, plumbing, air conditioner, and new roof. “There was a lot of electrical work,” recalls Laura. “There were only two wall outlets on the main floor!”

A local painter advised them on cleaning and repairing the sanctuary’s original tin ceiling, which showed 120 years of dirt and gapping. They scraped and sanded and painted the exterior—going from traditional white to its current mix of pea green and salmon, which initially caused quite a stir. 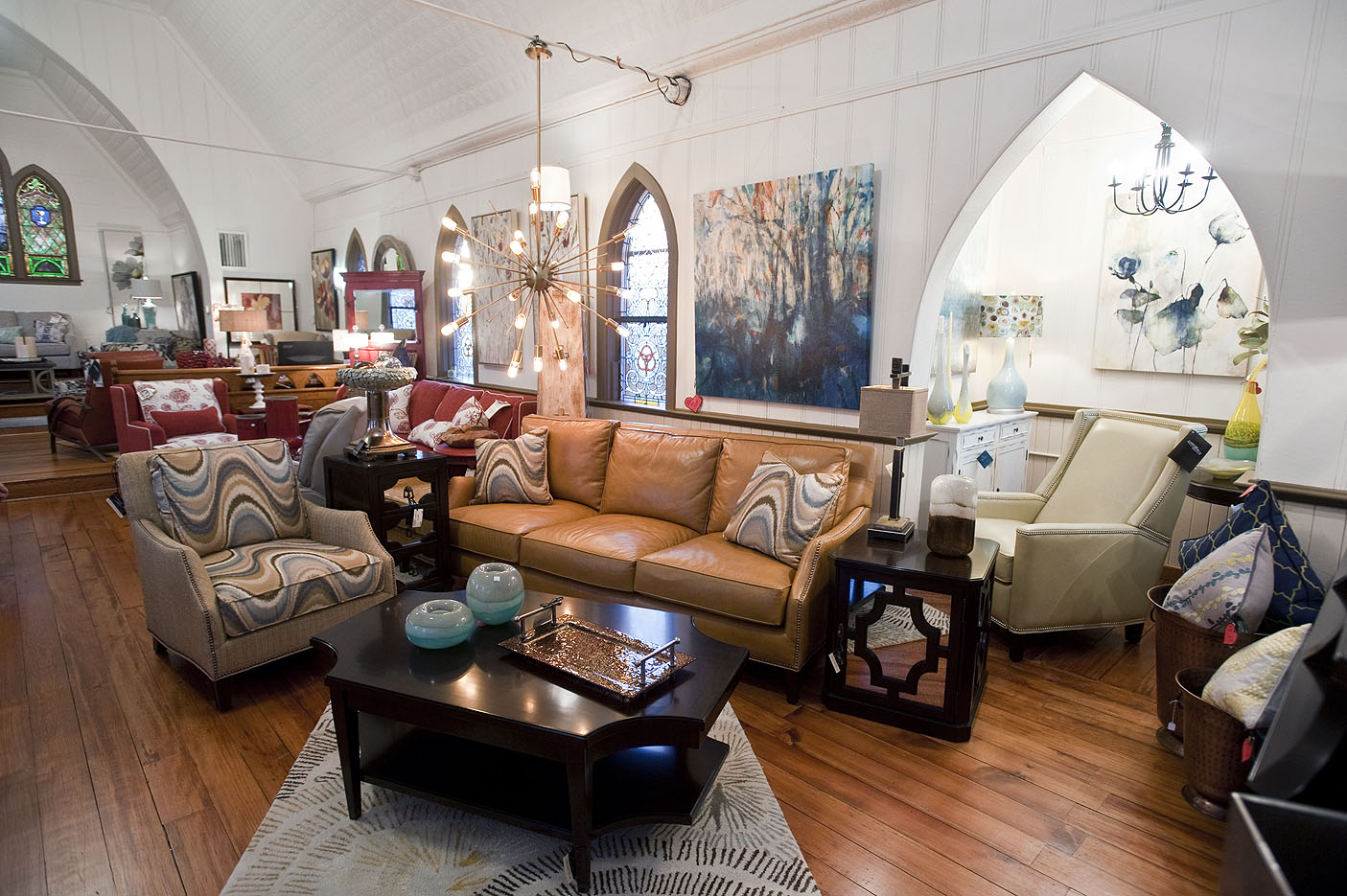 Two years later, on September 14, 2011, Enchanted Living’s pointed arch doors opened for business. Timing was good; the Bakken was booming, and the furniture’s bold, contemporary style stood out among other choices in the region. Not only did it strike a chord with locals, Quale and Glueckert quickly found themselves delivering truckload after truckload of furniture to Billings, Bismarck, Williston, Sidney, and Watford City to outfit entire homes,

Between the two businesses (not counting the owners), twelve women are employed. “They’re all pretty much part time,” says Quale. “Most are retirees who didn’t want a lot of hours and wanted to do something fun.” 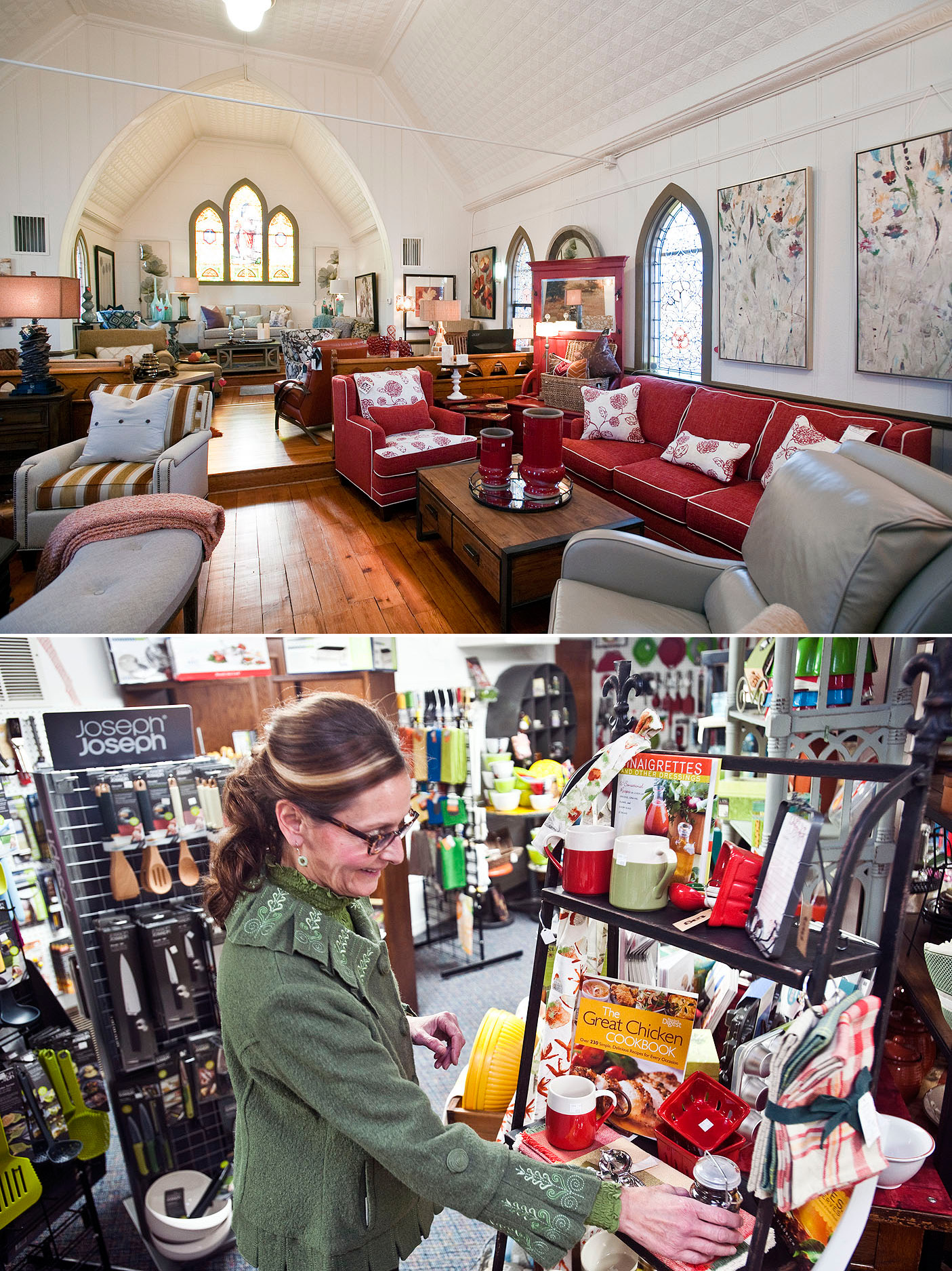 A longer version of this article appeared originally in the Jan/Feb 2016 printed issue of Montana Magazine.

Lynn is a fourth-generation Central Montana farm girl raised on the land her great-grandparents homesteaded. She grew up road tripping throughout Montana with her parents and now shoots and writes about food & travel for Sunset, Travel + Leisure, National Geographic Traveler, Via, as well as many Montana publications. From Hutterite kitchens and Rocky Mountain Oyster feeds to Farmers Markets and Flathead cherry stands, Lynn's favorite subject is back road Montana food and fun, and she documents it at a near-obsessive pace. She has photographed two cookbooks: Open Range, by Jay Bentley & Patrick Dillon, and Gatherings: Recipes and Friends from Montana’s Mustang Kitchen by Carole Sullivan. Lynn lives in the Shields Valley, outside Livingston, with her husband Dan Vermillion and their three children, but she still considers her family's Denton farm home. To see more of Lynn’s work go to lynndonaldson.com or to contact her: lynn@thelastbestplates.com. Lynn's headshot courtesy of piknikstudios.com.

Downtown of Helena just got a little classier with The Hawthorn Bottle Shop & Tasting Room. This wine bar is the perfect place for…