Wisdom may or may not come with drinking whiskey, but wisdom is inherent at Montgomery Distillery. They blend tradition and innovation in a way that’s authentic. This is evident when you tour the distillery, or participate in a bottling party, watch the bartenders in action, or and visit with the elegant and immensely funny Jenny Montgomery over a cocktail.

The ancient Greeks believed distilled spirits were divine and used them for ritual and religious purposes. As we stand next to the curvaceous German-built CARL still Jenny exclaims, “they figured out, ‘Hey this is amazing! It changes your frame of mind. You can light it on fire. Clearly, this is from the gods!’” Later, Scottish and Irish Celts agreed. Their word for distilled spirits is uisge beatha, meaning “water of life.”

Unlike some “craft distilleries,” Montgomery uses only grain they mill and ferment in house. The spirits in their bottles are their own, not made by another producer. Barley is grown and malted near Great Falls. Wheat and rye sourced from Ryan’s parents’ farm near Heath. They even plan to grow heirloom Abruzzi rye that head distiller Chad Larrabee tracked down in Italy. “It’s an experiment,” admits Jenny, but appealing. It may give a more complex flavor and will produce a product closer to what people drank historically.

Rich grain, pure water, frisky yeast, gorgeous copper stills and charred oak casks: these are the tools of the trade. The act of distilling, however, is a little bit art, a lot science, and requires discerning judgment. Montgomery excels in this department. Ryan learned the traditional fundamentals of distilling in Scotland and has worked alongside distillers throughout the U.S. He and the talented and self-taught Larrabee know, the art of distilling is when to make the cut. Meaning, when to select what’s called ‘the heart of the run’ that contains ethyl alcohol and aromatic flavor compounds. Cut too early and you get heads (toxic methanol and acetone). Cut too late and you get tails (fatty acids and fusel oils). “What we’re going for is the ethanol,” Jenny says, “because through some miracle—divine or scientific—our livers can metabolize it.” 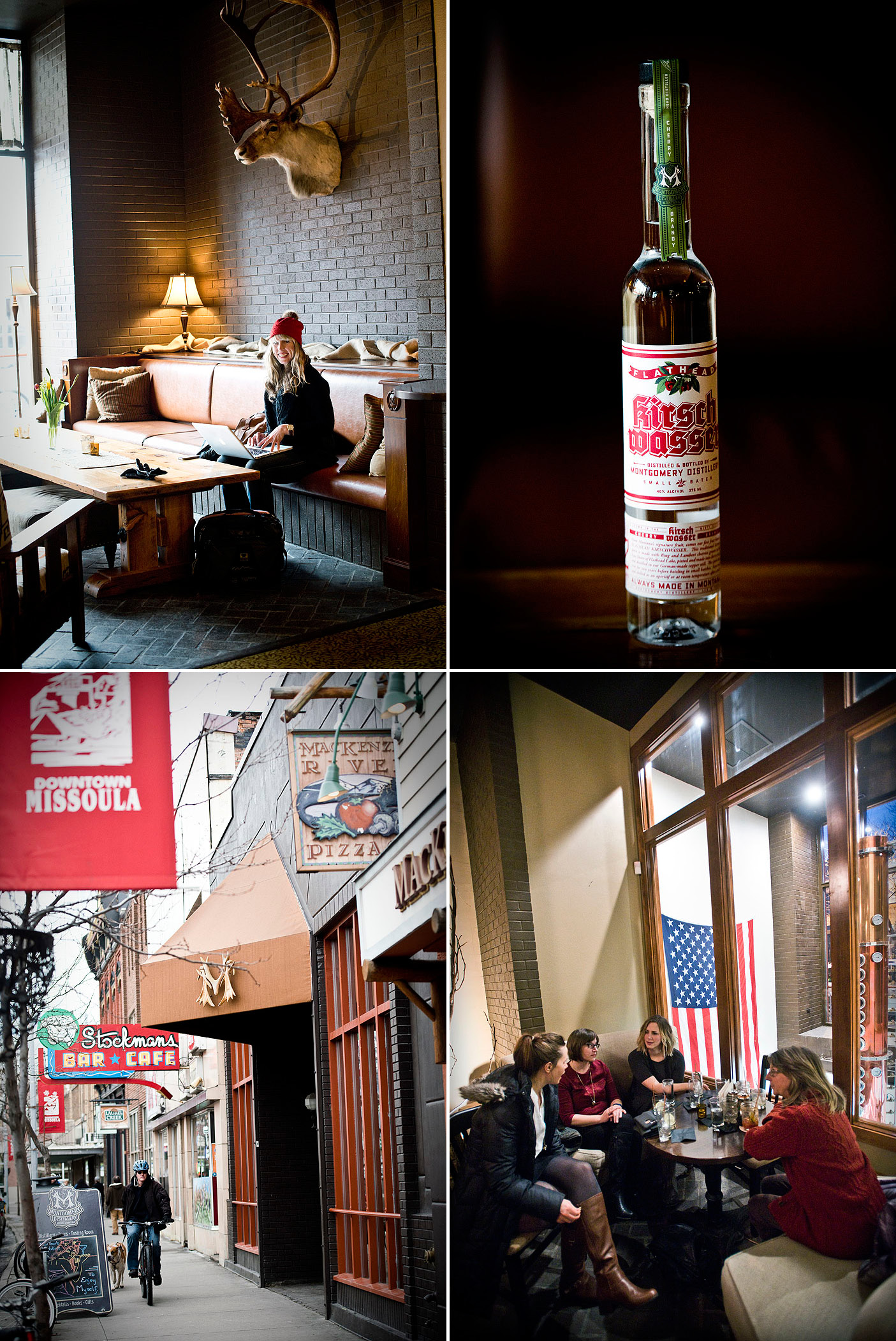 To the water of life made of heart Jenny brings pure botanicals. Her certificate in herbal studies from Green Path Herb School informs her choice of ingredients for Montgomery’s delicious cocktails; the products they produce for sale or use behind the bar, like bitters, syrups, shrubs, and liqueur; and for their exquisite Whyte Laydie dry gin and Skadi Aquavit.

Mixing cocktails “is a mongrel culinary art,” born in America from the mixing of cultures, Jenny explains, and because a distillery may only serve alcohol it produces, “We make a lot of 19th Century cocktails that are based on a single spirit….and use the full spectrum of fruit, herbs, and botanicals.” Sample concoctions, like the Honeybee Highball with vodka, Wustner Brothers honey shrub, lemon, soda, and spanked rosemary; and The Dude Abides with vodka, Black Coffee Roasting Company coffee liqueur, and Kalispell Creamery milk. Many ingredients are from local producers. All are tasty! 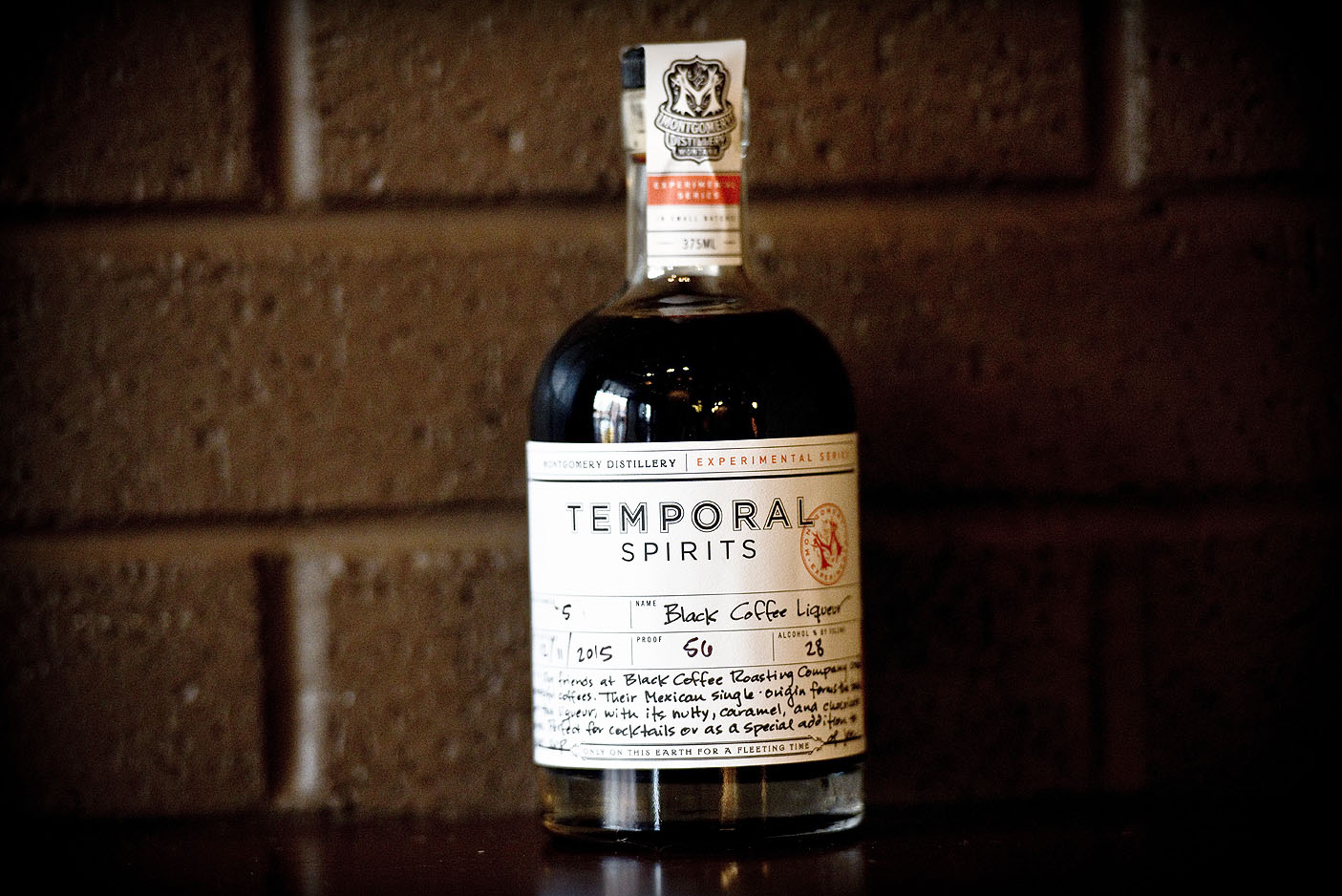 129 Front Street is an auspicious location for Montgomery Distillery, as it was originally built in 1889 to contain a liquor warehouse and the Elite Saloon. Back then Front Street was the Wall Street of western Montana. Saloons like the Elite acted as community centers with the benefit of cocktails. “In early Montana history drinking was a priority,” says Jenny. Surprisingly mixed drinks were popular, not straight bourbon as Western films would have us believe.

Soon, Montgomery will release a small batch Montana Single Malt. It was, after all, sharing single malts that sparked the love between Jenny and Ryan and inspired them to create Montgomery Distillery. Their hearts are in their business, so is their fabulous sense of humor. For a chuckle watch the mockumentary they made, “Introducing Montgomery” or “How I Learned to Stop Worrying and Love Gin.” The title pays homage to Stanley Kubrick’s cult classic “Dr. Strangelove.”

Downstairs on the wall of the distillery next to the magnificent copper stills are two portraits that sum up the heart and soul that abides in Montgomery Distillery. One is Sir Robert Burns, knighted 18th century poet of Scotland. The other is Jeff Bridges as The Dude. It seems only appropriate to sign off with a toast that honors them and you. Slàinte, Dude!