After years of traveling, I’ve come to the conclusion that I don’t really care for the bed and breakfast stay. I always feel a bit confined, as though I must tiptoe around another person’s space. The exception, without a doubt, is the Hidden Moose Lodge, tucked into the forested hillside just at the outskirts of Whitefish.

As I chat over coffee with owner Kent Taylor, it’s easy to see that he and his wife Kim have found their niche in life and it suits them well. Having met during college in Colorado, a ski trip (Kim was a ski racer) to Whitefish, Montana would set the course for their eventual life decision to move to Montana. After college, Kent would end up working at Westin Hotels in Seattle on the management side of the operations, but missed the interaction with the guests. So the decision was made to move to Whitefish and build a lodge. It’s here in Whitefish they have raised their two kids, Klaire (a junior at Montana State University) and Kyle (a pro skier). 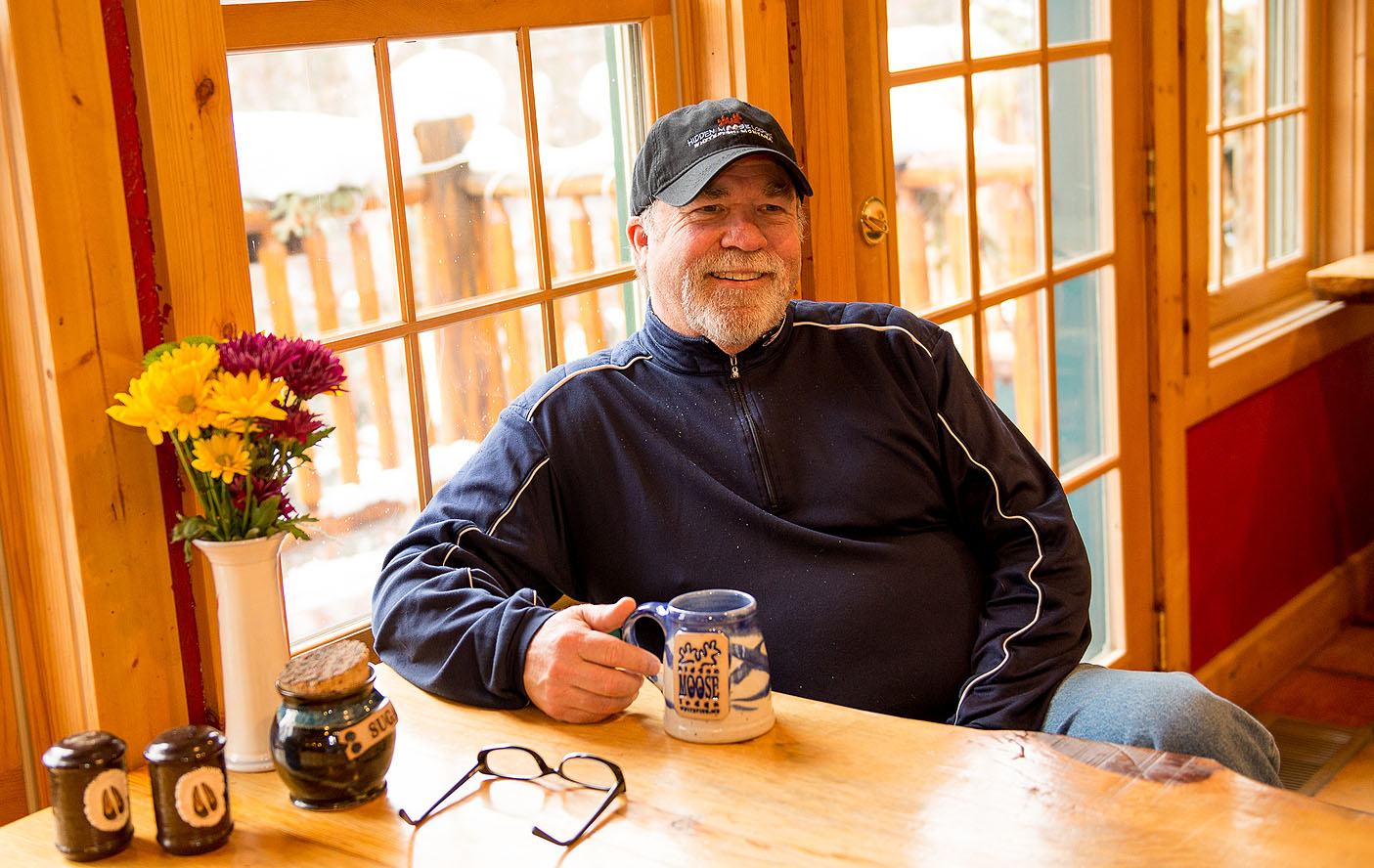 Kent will say, in his easygoing manner, that they argued for a year about what to name the log lodge. His choice was Barking Rock Lodge, but Kim won out with her choice of Hidden Moose. Moose decor runs strong throughout the property, now in its 21st year. The Lodge currently has 15 guest rooms, with plans for future expansion with the addition of cabins. Each guest room, uniquely furnished in sort of a woodsy-western style, has its own bathroom and an outside entrance from a deck. I love the fact that the Taylors showcase Montana artwork and books throughout the lodge. 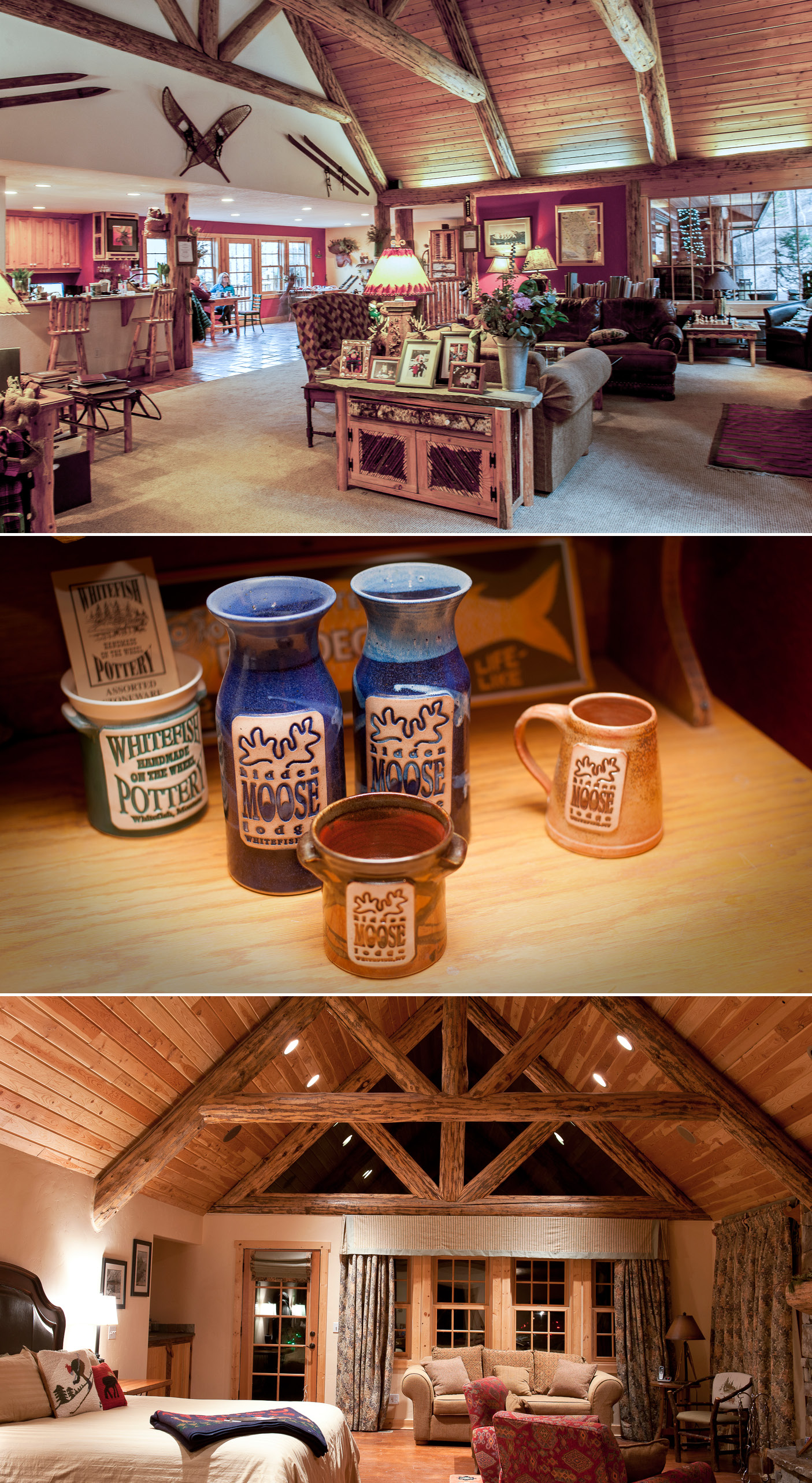 The centerpiece of Hidden Moose has to be its great room with a floor-to-ceiling stone fireplace, flanked on either side by large windows that look out onto a waterfall. The great room merges with a cozy dining nook and an open kitchen. There is no doubt you can find your way here for a cup of coffee, munch on homemade cookies, or to sit and read – and feel perfectly at home in your jammies.

It’s not possible to leave the breakfast table hungry. Between the fresh fruit, omelets, huckleberry pancakes (always a favorite with this native berry), bacon, or ham – it’s a Montana style feed. The outdoor hot tub tucked into a private alcove, complimentary evening beverages, free wi-fi, and a video library for guests are those extra touches that sweeten the stay at Hidden Moose.

While Kim works out of the Lodge as a financial planner, Kent can be found on the premises when not taking advantage of the short 10-minute drive to hit the slopes at Big Mountain. He’ll be the first to say that he loves chatting with his guests about their options of what to see and do in the area, including sage advice on skiing, fishing, hiking, and rafting.

What is distinctive about Hidden Moose is how well suited it is for a group to take over the entire lodge – whether it be a family reunion, corporate retreat, or a wedding party. The ability of Kent and Kim to adapt to any groups’ needs, be it catering, transportation, or being totally hands off let them do their thing, speaks to how well the Taylors have nailed down Montana hospitality.

Kent will say that close to half of the guests are repeat customers. Bruce and Janet McDonald from Lethbridge have been coming for 18 years. Janet says, “If we can’t stay at Hidden Moose, we just don’t come to Whitefish. It’s our home away from home.”

While a moose themed mug, or hat is a nice memento to part with, you’re going to take home a new friendship with Kim and Kent. There is no looking back for the Taylors. They can’t imagine doing anything differently with their lives and will say, without a moment’s hesitation, it’s the people that come through their doors that bring joy to their lives.

Donnie has been with the Montana Office of Tourism since 1990. For the last ten years, she has split her time between working with travel journalists and photographing anything and everything that lures people to visit our great state. Her unquenchable passion for photography and travel has shaped her life, with the Far East being among her favorite destinations to explore. Home base is Helena for this wife and mother of two sons. Donnie's work has been published in Sunset, National Geographic Traveler, Horizon Air, Delta Sky Magazine and Via, as well as several Montana newspapers and magazines. Check out her work at donniesexton.com.

A good steak honors the animal, the land, and the ranchers who work it. Last summer under the backdrop of Crazy Mountains, ranchers and…