Over the last several summers, my parents, sister and I started a nice tradition of getting together over the 4th of July holiday. The long weekend escape has been especially rewarding since we live thousands of miles apart. This past summer, it was my turn to host. I wanted show off a slice of my beloved northwestern Montana in a way that would be both entertaining and unique. I had scheduled stops at the funky Polebridge parade and the fireworks display in Whitefish, but was looking for something a bit more adventurous that would make this edition of our get together extra memorable. I came up with the perfect plan! Reserving the Werner Peak Fire Lookout Tower for an evening would provide a stay that my family members would remember and cherish for a lifetime. 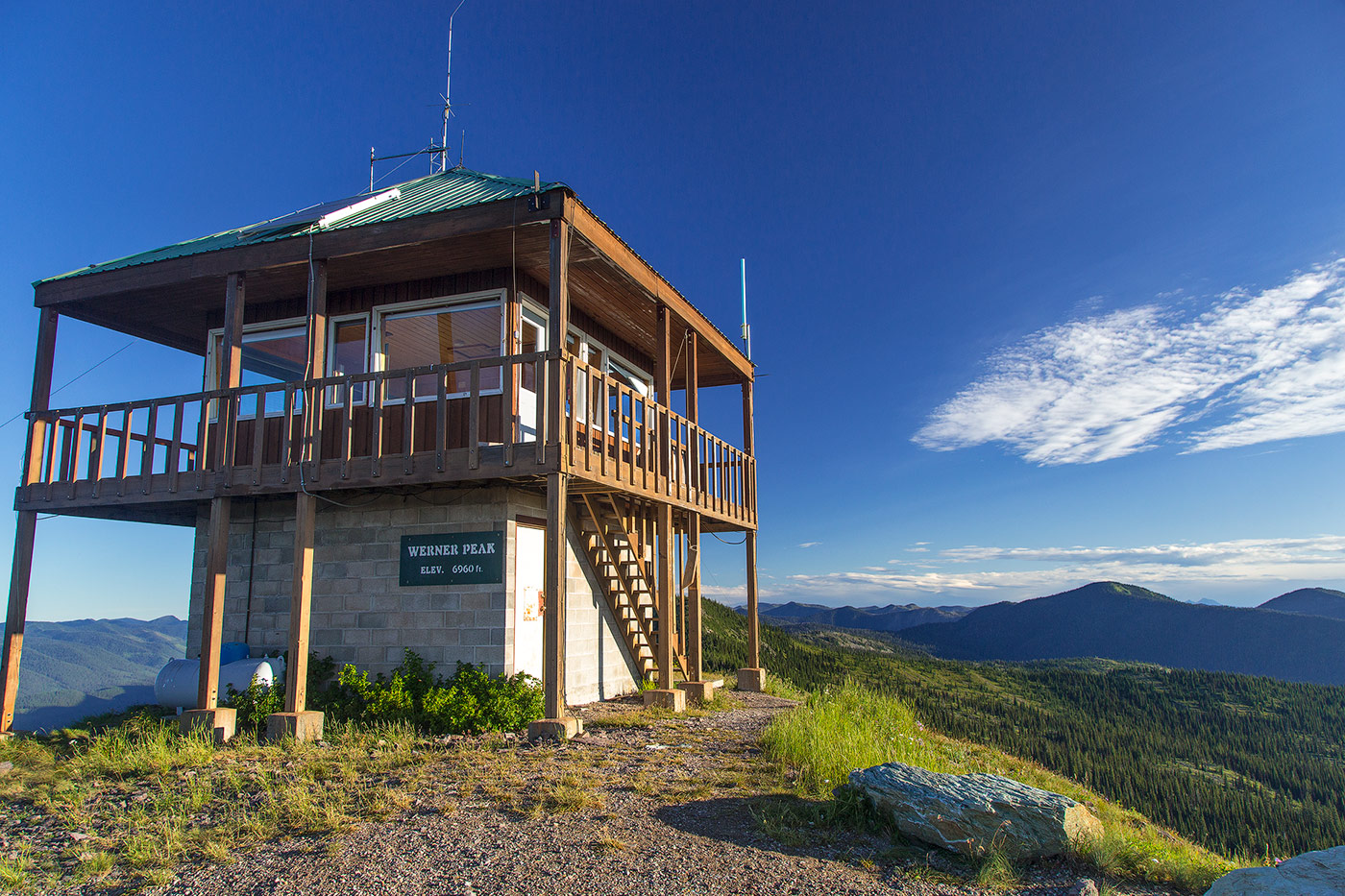 I had stayed at this remote mountaintop setting twice previously. The tower is easily accessible as you can drive an automobile practically to the retractable ladder that climbs the eight feet to the picture window room with a view to die for. The easy access means that it is getting to be an extremely popular lodging option during the short eight-week window it is open to the public each summer and fall. That popularity meant I had to get on the phone with the DNRC promptly last January to secure a date for the first week of July. 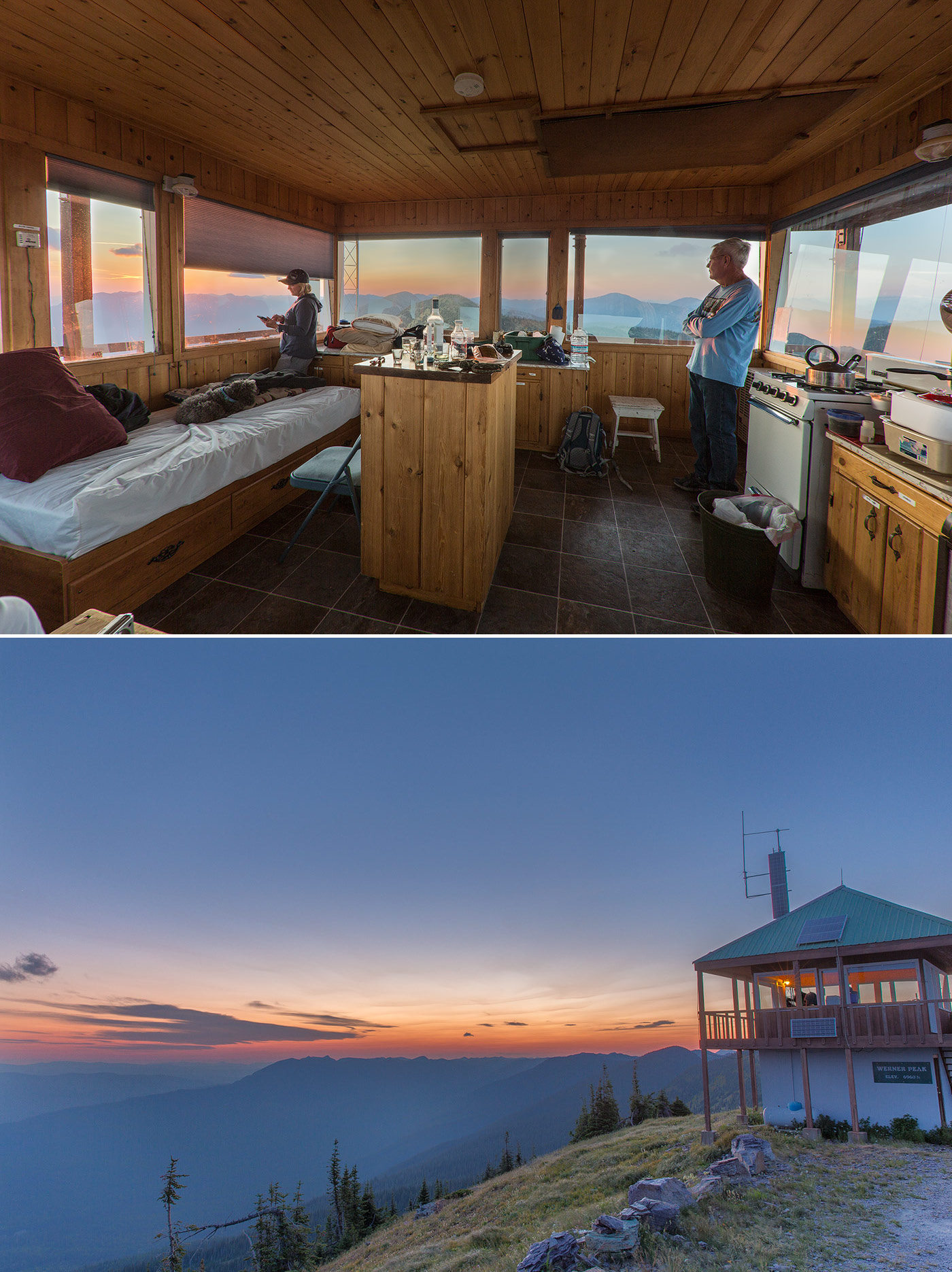 The historic site has hosted three fire towers since 1914 with keepers spying for the first hint of smoke from a wildfire. The current building was constructed in 1983. At 6,960 feet in elevation there is a commanding 360-degree view of the Whitefish Range around you, the Salish Range to the west and the dramatic peaks of nearby Glacier National Park. 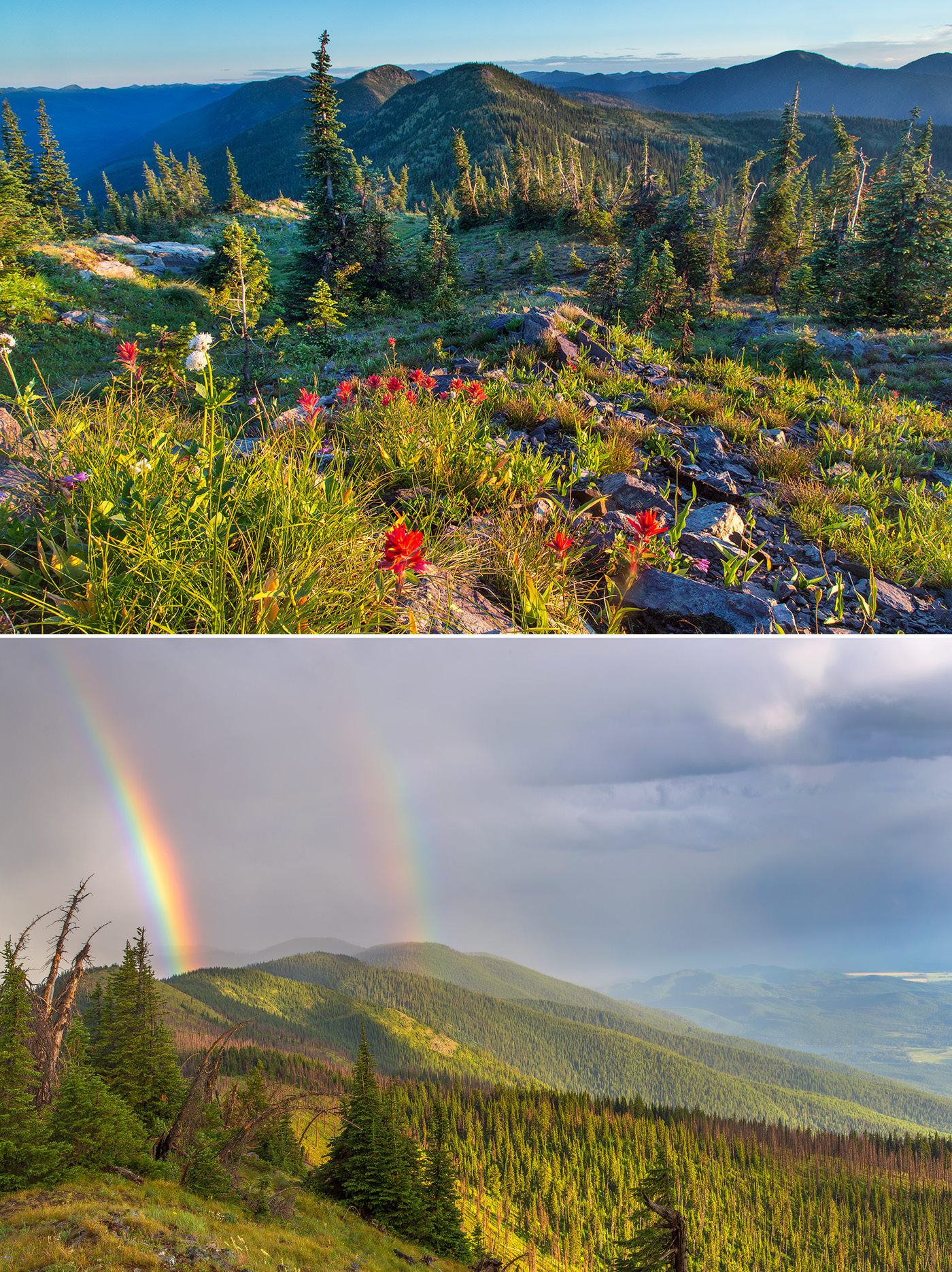 It is only about 20 miles from my home in Whitefish to Werner Peak, but it is a rough road and it took nearly an hour to drive. When my parents, sister (along with her poodle, Jaeger) and I arrived, I notice that the road had again claimed one of my tires as its victim. The second flat tire in three visits! Experience had taught me well as I came prepared with a can of fix-a-flat and a portable air compressor.

We settled in and unpacked our food and bedding. There is room to comfortably sleep four. The available propane tanks provide energy for lights, a fridge, and cooking stove. We cooked, read journals left by previous lodgers, and laughed (a lot) perhaps because of copious amounts of wine that flowed into our tin cups. I’ve had wild weather during my previous stays at the lookout. Hail, rainbows and lightning can be especially thrilling from the lofty perch; but on this July evening, there was just the glow of lantern lights from our lofted shelter that billowed into a long night where a symphony of stars took over a brilliant sky and left us feeling awestruck.

The next morning, my sister, Lisa, and I took off for a quick hike on the Whitefish Divide Trail (a.k.a. Ralph Thayer Memorial Trail) which runs right past the lookout. We headed past the lookout’s outhouse, which may have the most scenic view from any latrine on the planet. With privacy abounding, I am pretty sure that closing the door to the view into Glacier National Park while using this facility would be considered a huge mistake! We hiked west on pleasant ridgelines towards China Basin. Fields of summer wildflowers blanketed the lush hills below us. It was a bit too early in the season to pick huckleberries, but green berries were ever present at out feet. We could have hiked all the way to Red Meadow Lake if we had desired.

The vacation plan worked to perfection. Though our stay was only one evening we made enough memories on top of the world to last a lifetime.

For more information on Werner Peak Lookout Tower contact the Montana DNRC here. Or you can reserve by phone starting January 2 at 406-881-2371.