Having three kids under the age of nine means we are no strangers to corn mazes and pumpkin patches. When we had just one child and attended our first event geared toward Fall Family Fun, I remember thinking, “Wow. All these kids running around are freaking me out!” Had I attended one of these chaotic pumpkin patches in college, the scene may have kept me from wanting a brood of my own. I remember asking my husband, “Why did we come here? The only thing worse than being around one toddler is being around 300 of them.”

I’m happy to say I’m no longer the Scrooge of the Pumpkin Patch. I’ve since been to dozens of these events and am now the first mom raising her hand to volunteer to chaperone autumn fieldtrips. So when my husband’s parents invited us down to their house in Billings for what’s become our annual Vermillion Family Fall Extravaganza, we enthusiastically accepted.

Last year the centerpiece of our trip was the Lego exhibit at the Yellowstone Art Museum. This year, my mother-in-law chose the haunted Twilight Tour at the Moss Mansion. But what family fall weekend would be complete without a corn maze? We decided to kick things off by meeting at The Maize at Grandpa’s Farm.

We chose the $9 per person option and just did the corn maze, but there were plenty of free activities like Hay Mountain (an enormous slide), food vendors (Kettlekorn anyone?) and other things to keep us occupied without shelling out extra for Apocalyptic Paintball.

The maze had been open since September 4 and by now was getting a little trampled, but it was still fun. We grabbed clue sheets that had trivia questions with multiple choice answers to help at 10 intersections—you could pick from themes like Kids, Sports, Biblical—we took one of each (which I highly recommend) and were able to cross-check answers, which helped figure out which direction to turn.

After a quick stop at home to don costumes, we headed downtown to the Moss Mansion where my in-laws bought us all tickets to the 112-year-old home’s Twilight Tours (Halloween attire is encouraged).

We arrived on the sprawling grounds at 6:30pm. There were food carts and other treat surprises—as well as spooky mannequins and bloody handprints—set up near the back entrance. The sky was electric blue and the looming, three-story mansion looked appropriately foreboding and made the kids wonder if this was such a good idea as we waited for our tour to begin.

Soon, our group was escorted down the back stairs to the basement gift shop, where our guide would meet us. Creepy costumed servants whisked through every now and then, and we could hear screams and stomping upstairs (and perhaps a body being dragged across the floor). The kids’ eyes were wide.

After watching a very funny video about how to NOT be a straggler—or lean on the 100-year-old furniture or touch the original art work—we were lead up the narrow servant’s staircase into the parlor where we met Ma Bender—the first of the The Bloody Benders, a real family of serial killers from 1890’s Kansas—whom live actors portrayed. The kids inched closer and closer to us as Ma told us the family was entertaining guests that evening and invited us to stay….but would we ever leave? 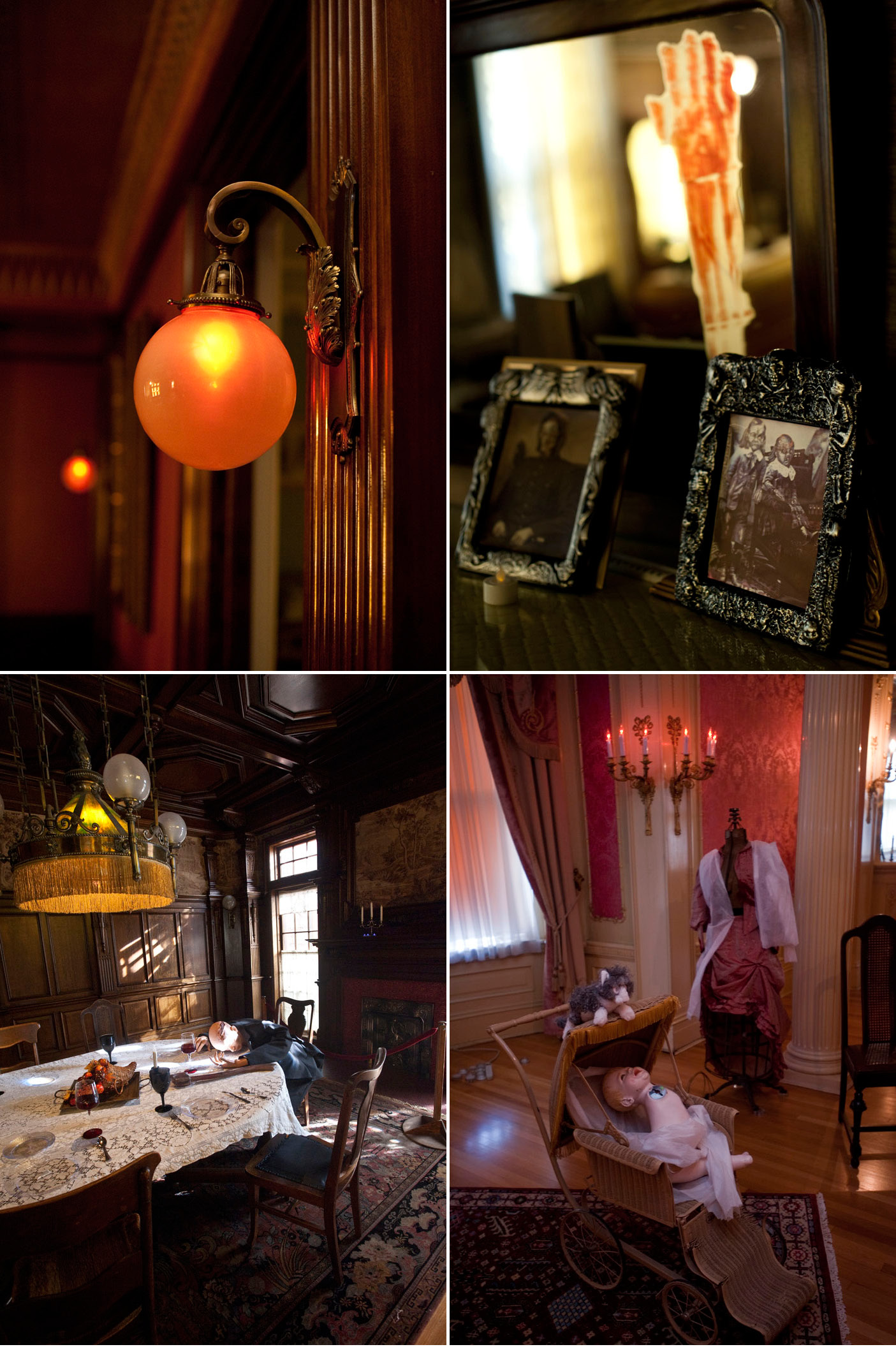 We went from room to room meeting the nasty Bender family—all the while shrieks and screams could be heard in far off corners of the dark and eerie mansion. When we entered the dining room, we interrupted an argument between three sisters as an unfortunate dinner guest with an enormous head would was slumped over his plate.

Upstairs, we met a housekeeper who wasn’t quite done cleaning the room from a guest who’d recently “departed”, some eerie children, a doctor asking if any of us would like to volunteer for his medical experiments (though he appeared to have two willing cadavers in the four-post bed near the table with his medical bags, knives and—gasp!—bloody fingers!) My nine-year-old asked the good doctor if his knives were real. The actor—all of them were clever at improv—retorted, “Do you want to find out?” 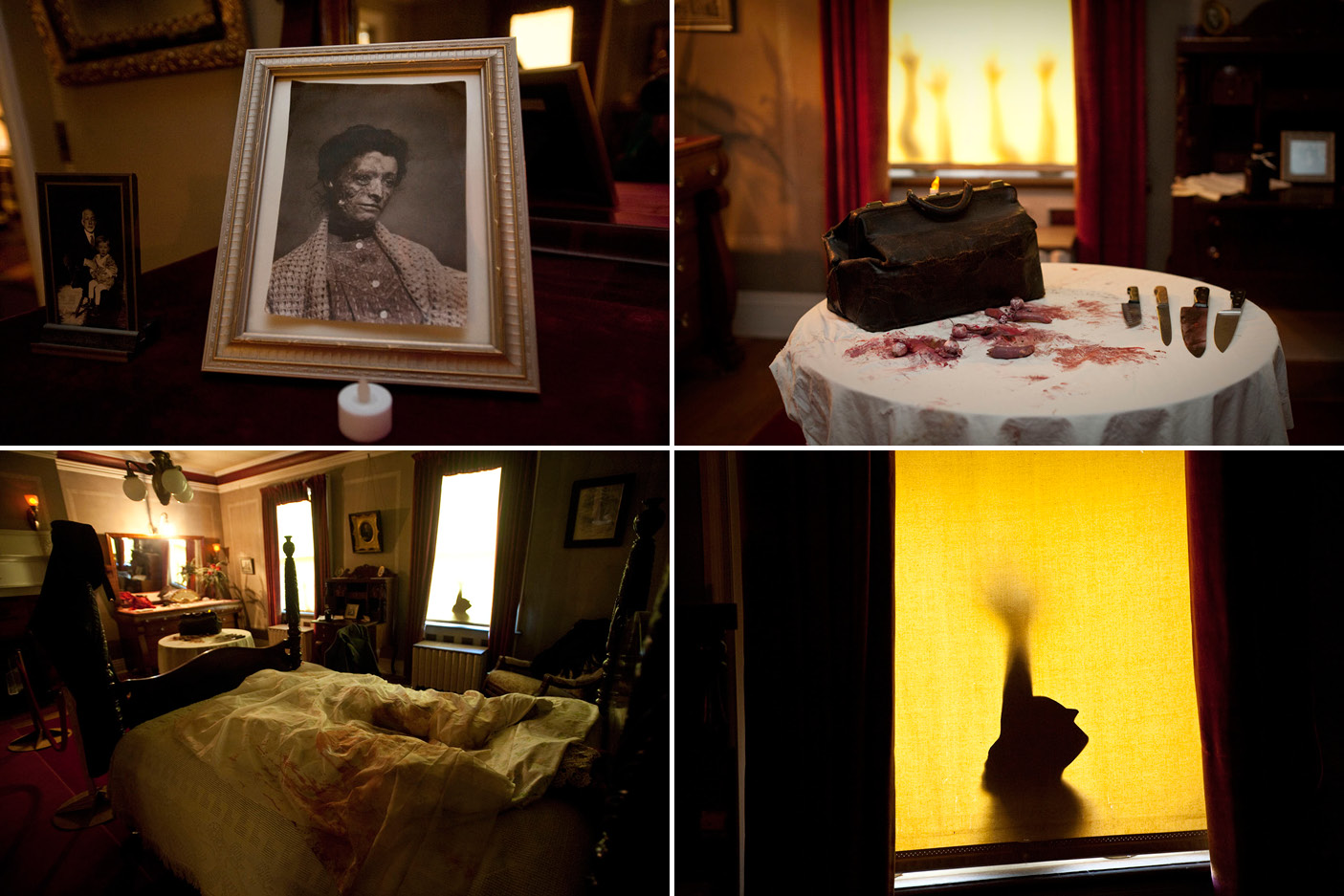 After meeting several more guests and family members, we ended up in the kitchen, where one of the cooks took a hit for us as we scampered out, stepping over her collapsed body. Whew!

We always end our Fall Extravaganza Weekend on Sunday with a stop at Zoo Montana. The kids love running around on its tree-lined paths that skirt Canyon Creek. The grounds are truly gorgeous in October and the kids can scamper around on the trail that winds beneath a canopy of brilliant red and orange leaves over numerous bridges, side trails and boulders that skirt Canyon Creek.

We’ve taken the kids to zoos all over the US, and we are truly lucky to have one of this caliber here in Montana. It’s fun to get cloze-up views of grizzly bears, gray wolves, bald eagles, bighorn sheep, river otters and Canadian lynx.

One of the red pandas was pacing in a circle and seemed restless the day we visited. “No,” explained Ben, one of our seven-year-old twins. “That’s his trick!” We press our noses up against the glass to watch the river otters swim and dive, and everyone gets a kick out of beavers named Huckleberry and Finn lumbering around. One of the grizzlies was sleepily yawning and stretching in a hammock when we walked by, and the kids all howled at the gray wolves, who were howling when we walked up. The Amur Tigers, too, were just waking up from naps and yawning. 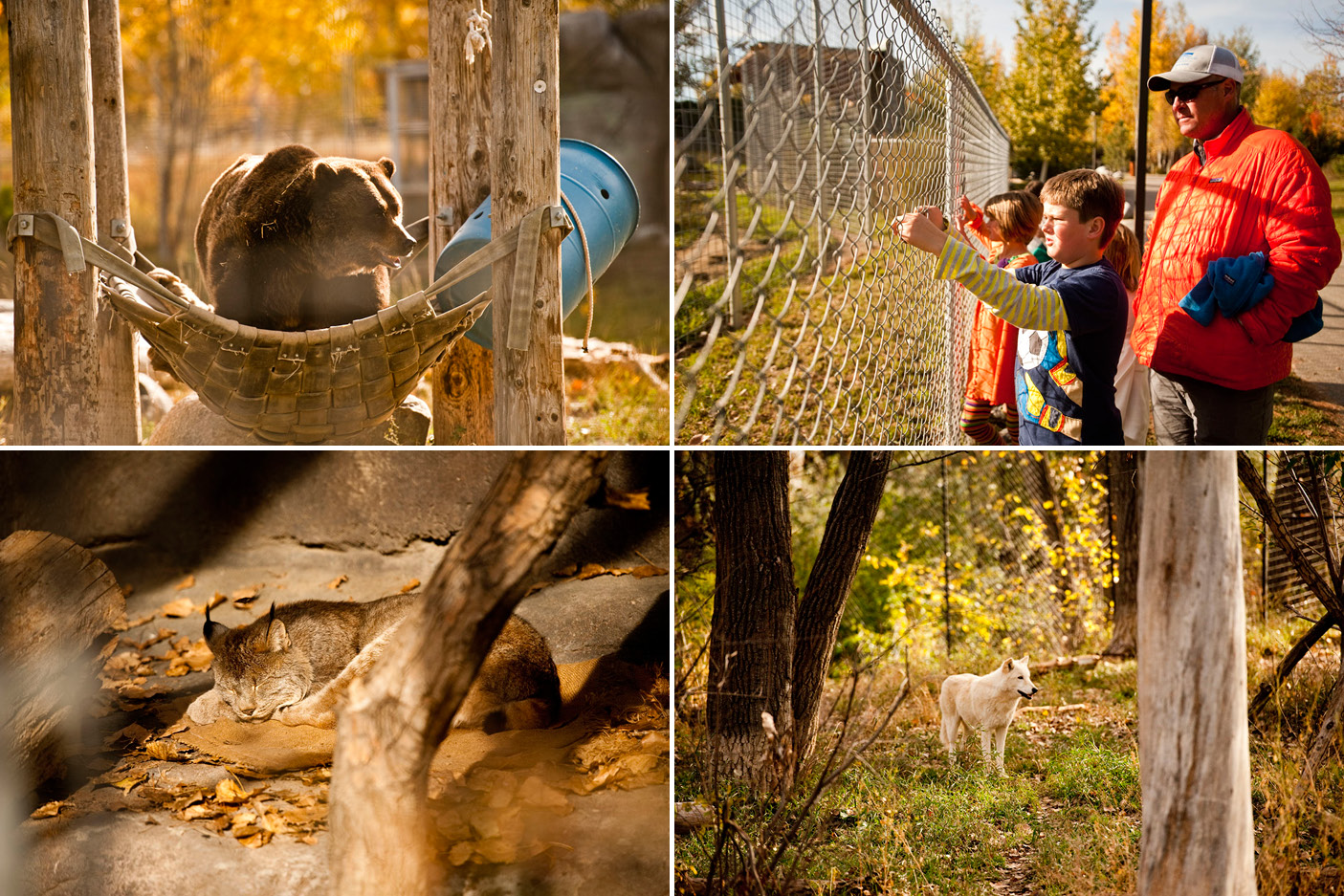 My niece Josie wanted to make sure we visited The Homestead, which I had never seen before. It’s a beautiful barn and farmhouse (with a cute classroom used for children’s educational programs tucked inside). There are Belgian draft horses, a bunny, a pond with koi, and domestic goats for feeding and petting.) 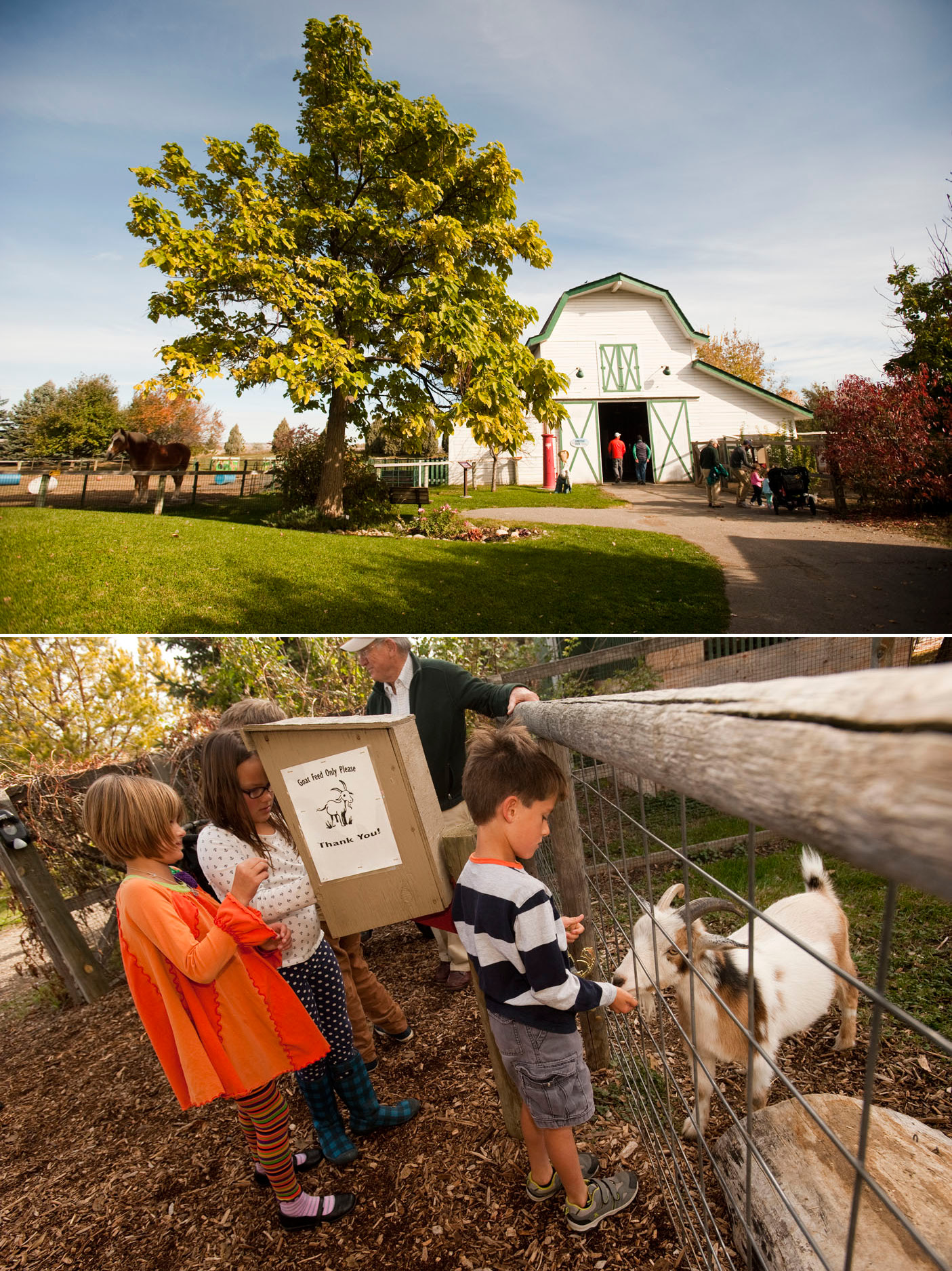 The kids had fun trailing the peacocks who have free run of the zoo, and they made sure we stopped inside the Discovery Area near the gift shop to check out the snakes, possums and reptiles before burning off more energy (and waffles!) on the large playground before we headed home.

The Zoo is only about a one-minute drive from I-90 (off the Zoo Drive exit) on the west side of town, so it’s the perfect spot for us to quickly zip home after a fun fall weekend. Thanks again, Yaya & Papa!

Zoo Montana is open every day of the year except Thanksigiving Day, Christmas Day and New Year’s Day. Click here to view their hours.

Lynn is a fourth-generation Central Montana farm girl raised on the land her great-grandparents homesteaded. She grew up road tripping throughout Montana with her parents and now shoots and writes about food & travel for Sunset, Travel + Leisure, National Geographic Traveler, Via, as well as many Montana publications. From Hutterite kitchens and Rocky Mountain Oyster feeds to Farmers Markets and Flathead cherry stands, Lynn's favorite subject is back road Montana food and fun, and she documents it at a near-obsessive pace. She has photographed two cookbooks: Open Range, by Jay Bentley & Patrick Dillon, and Gatherings: Recipes and Friends from Montana’s Mustang Kitchen by Carole Sullivan. Lynn lives in the Shields Valley, outside Livingston, with her husband Dan Vermillion and their three children, but she still considers her family's Denton farm home. To see more of Lynn’s work go to lynndonaldson.com or to contact her: lynn@thelastbestplates.com. Lynn's headshot courtesy of piknikstudios.com.

Sap Moon Once again we shall See the snow melt Taste the flowing sap Touch the budding seeds. Smell the whitening flowers Know…