The best-known and most beloved traveling theatrical troupes are the Shakespearean companies that continue to this day to charm and entertain people around the globe. For the past 43 years Montana is fortunate to have had it’s own, Montana Shakespeare In The Parks, producing Shakespearean plays that are free to the public. Based out of Bozeman, it employs professional actors from around the country. Throughout the summer months MSITP travels thousands of miles crisscrossing the state of Montana, visiting lesser-known towns like Utica, Birney and Charlo, as well as larger towns such as Missoula, Helena and Kalispell. They even travel beyond the boarders of Montana, going as far as Pocatello, ID, Spokane, WA and Cody, WY. 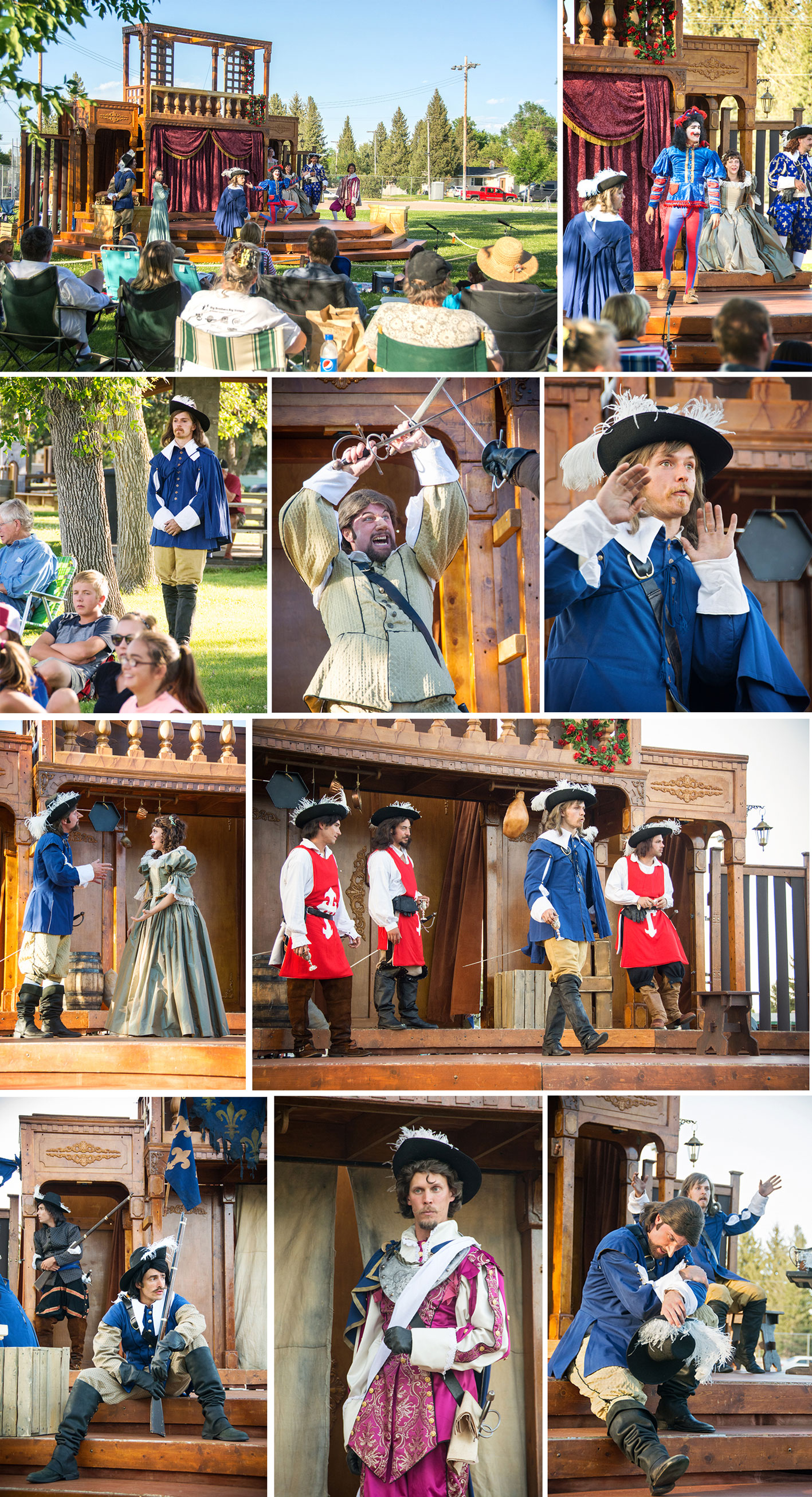 During the 1500’s the wealthy and powerful English noble houses maintained a ‘troupe’ of actors who would perform for the noble family and friends, as well as complete other household duties. It was quite expensive to maintain a troupe of 6-10 ‘players’, so the troupes branched out and traveled to neighboring cities to perform for the public for additional profit. By the late 1500’s, the traveling troupes of professional actors became organized acting companies that were backed by wealthy patrons. The drama of live theatre was so popular it attracted royal patronage down to the most common peasant. By 1592 William Shakespeare’s plays were becoming well-known in London, and continue their legacy by being the most translated plays in every major living language.

Not much has changed in the 430 years of traveling theatre companies, or in the 43 years of Montana Shakespeare in the Parks. The stage is roughly the same design as it was in 1972 and although it is reused every season, can last at least another 10 years. Many of the professional actors hail from large theatre communities, such as Chicago, Minneapolis and NYC and must audition every year in these cities. With Montanans having the opportunity to audition in Bozeman and Missoula.

This year, there are six returning and four new actors bringing to life two different productions, “The Taming of the Shrew” and “Cyrano de Bergerac”. There are no ‘prima donnas’ here—there’s no dressing room, the actors change into costumes and apply makeup out in the open park, often as early theatregoers are arriving. The travel schedule is grueling, with 75 performance days, 60 communities and 3 days off. Each day consists of driving anywhere between 1 to 3½ hours, laborious stage setup, costume and makeup preparations, the performance and stage teardown, many times in sweltering summer heat or unpredictable weather. Sometimes, there is a little downtime where the performers take time for themselves for physical training or to relax.

The two plays leapfrog with each location and similar to the days of Shakespeare, everyone plays more than one part. So, if you’d like to catch the second play, you’ll most likely have to travel to a town nearby, as did one young family from Red Lodge—they caught The Taming of the Shrew in their hometown, then traveled to Big Timber the next day to attend Cyrano.

More important than being a great performer, is the ability to be a team player and a personable ambassador. Because of the nature of the ‘traveling troupe’, there is a familial air backstage, like brothers and sisters looking out for one another, all for the good of the troupe. Much like 400 years ago, each community must raise a seed fund to help pay for the production. They can save money by offering a homestay to the actors, and sometimes the performers are invited to a late dinner in the private homes of locals. 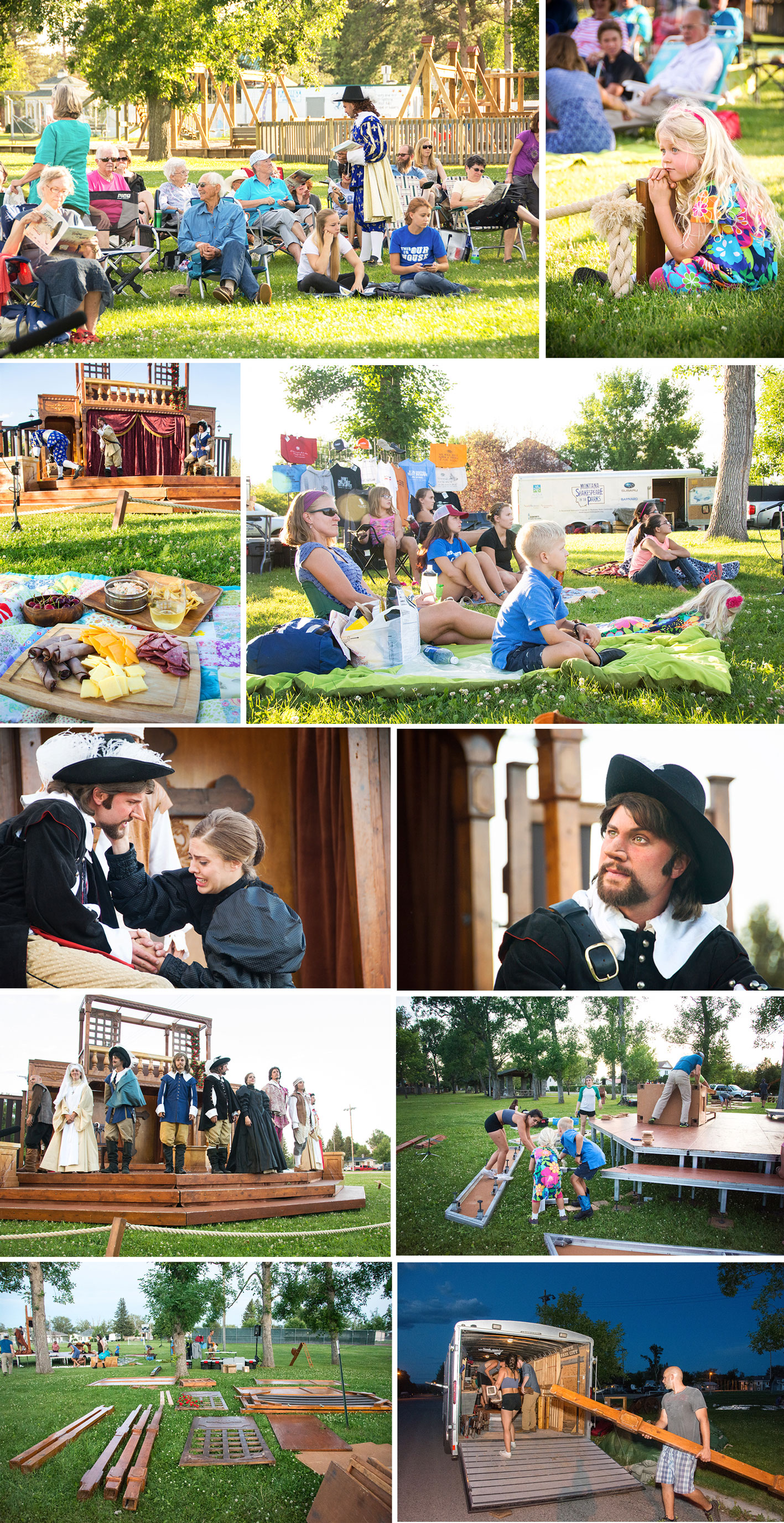 Shakespeare in the Parks is a summer tradition and highlight for many rural Montana communities. Handmade quilts, blankets and picnics abound with young and old generations coming together for an evening of elaborate costumes, drama, tragedy and romance under the beautiful summer sky.

The season ends September 8th, make your plans now so you don’t miss out on a great experience.

Kyra is a photographer, artist, educator, wife and mother born and raised in Montana. She has called Livingston her home for the last 14 years and loves living within minutes to the Yellowstone River, wilderness trailheads, an amazing local cheese & wine store, and a plethora of tantalizing eateries and stylish boutique stores. Kyra’s passion for photography has lead her to teaching workshops about the simple pleasures of lifestyle and fine art photography, all with her favorite camera...an iPhone. Kyra has been published in Bon Appetite, Greater Yellowstone Magazine, Montana Magazine, Distinctly Montana and CAT Apparel Clothing. To sign up for a workshop or check out her work go to kyraames.com.

An interview with magazine publisher Jesse Lenz, whose most recent issue of The Collective Quarterly, Absaroka expounds on Montana’s diverse beauty. Montana is no…