Friends and I hiked in Spain’s Basque Country last year where we saw shepherd huts high in the Pyrenees Mountains. We ate delicious cheeses made by hand from the creamy milk of picturesque long-coated Manech (Basque) sheep we encountered in the hills. I thought at the time of my friend Lark Gilmer back in Montana. Over the years Lark learned the craft of shepherding by shadowing others. She learned cheesemaking from the Basques. The experience inspired her to learn to make Ossau Iraty, a fromage de brebis cheese, a storied Basque cheese. Lark is now making her own cheese full tilt in Laurin, Montana in the Ruby Valley. Her artisanal enterprise Poor Orphan Creamery makes 17 cheese varieties. Only two years into officially making cheese, Lark’s flavorful cheeses are sought after by cheese lovers throughout Montana and as far away as New York City, Portland, Oregon and Switzerland.

I visited Poor Orphan Creamery this past spring to tour Lark’s creamery and talk about her cheese. A home cheese maker myself, I am fascinated by the magical process of changing milk to cheese. Making cheese is detailed, precise, and sometimes, serendipitous. But one thing for sure, making cheese is hard work. Lark shepherds 100 Icelandic sheep that are spread around borrowed pastures in the Ruby Valley. She owns only her creamery. She says, “If as a non-land owner you can figure out the land piece, you can raise sheep.” She describes that it has taken a village of help to bring her to where she is today. She pastures her sheep on land trust pastures held by local second-homeowners as weed and fire control. 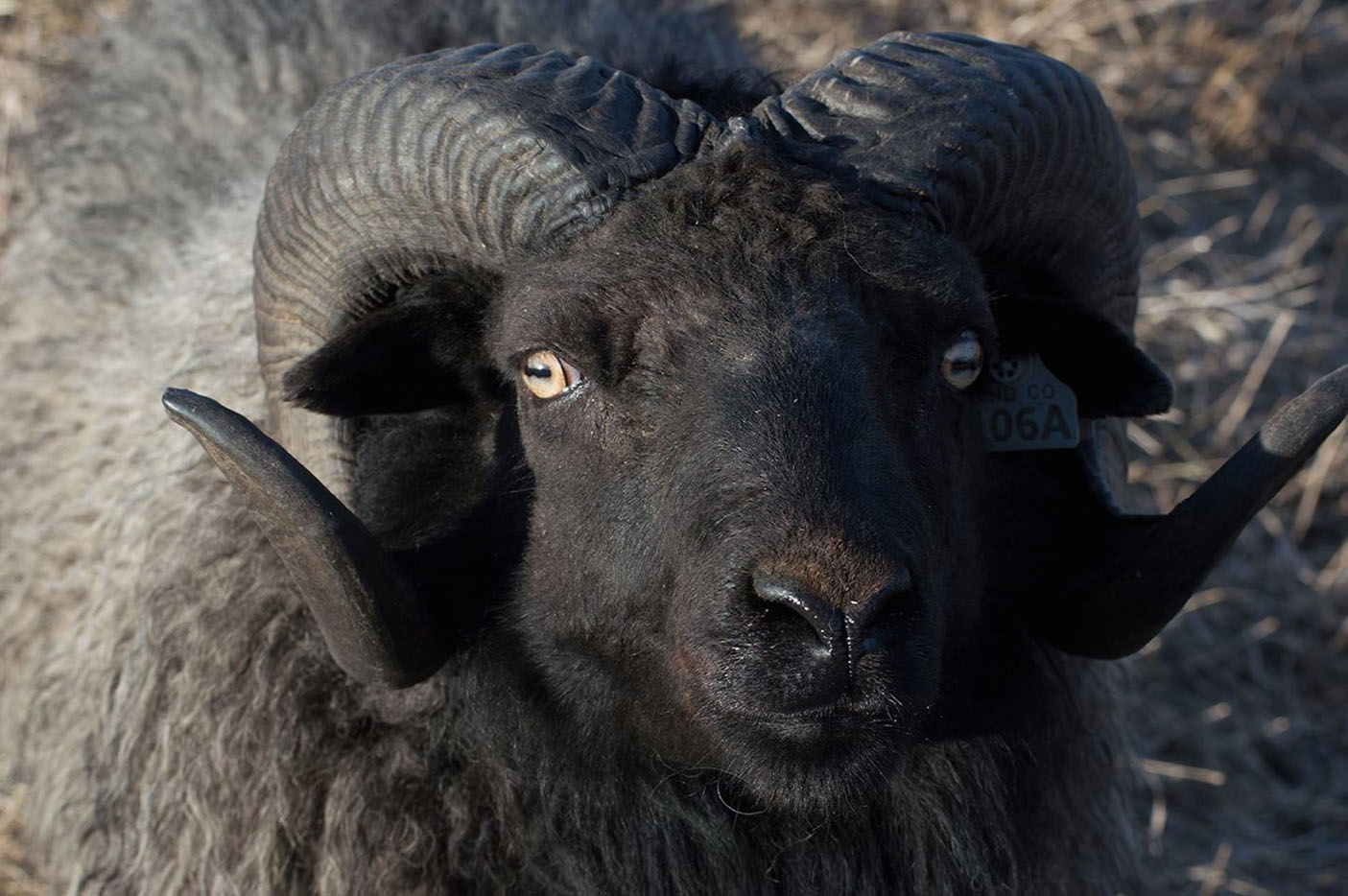 So if your sheep are not in your backyard, how do you milk them? Lark invented an ingenious trailer that is equipped as her milking parlor. The trailer is transported from pasture to pasture where ewes are trained to enter the milking trailer by kibble (a mixture of alfalfa pellets, black oil sunflower seeds, and organic oat and barley). The milking stanchion can accommodate 6 sheep at a time.

Icelandic sheep milk is the heart of Lark’s business. Raw sheep milk of all milk from milk-giving animals provides the richest most abundant butterfat, essential to cheese. Her first raw ewe’s milk cheeses aged for four months are the heart of her cheese making. To honor the spirit of her community one cheese is embossed with a heart and called Clover, a sister to Ossau Iraty and similar to Manchego. Fresh sheep milk pasteurized cheeses are available July through November.

In order to build out the volume of and diversify her cheese offering Lark has undertaken a relationship with the Montana State Prison in Deer Lodge. She picks up milk from the prison’s 240 alpine pastured cows to glean 100 gallons/week of raw milk. She offers a couple of aged pasteurized cow milk farmstead cheeses known as Alpine Tommes. One is Twyst, rubbed with honey bourbon. The second is Bumble rubbed with Ruby Valley honey. Other ‘bloomy rind’ cow milk cheeses she offers are Memento, a soft cheese covered in ash and Whisper, a traditional Brie cheese. 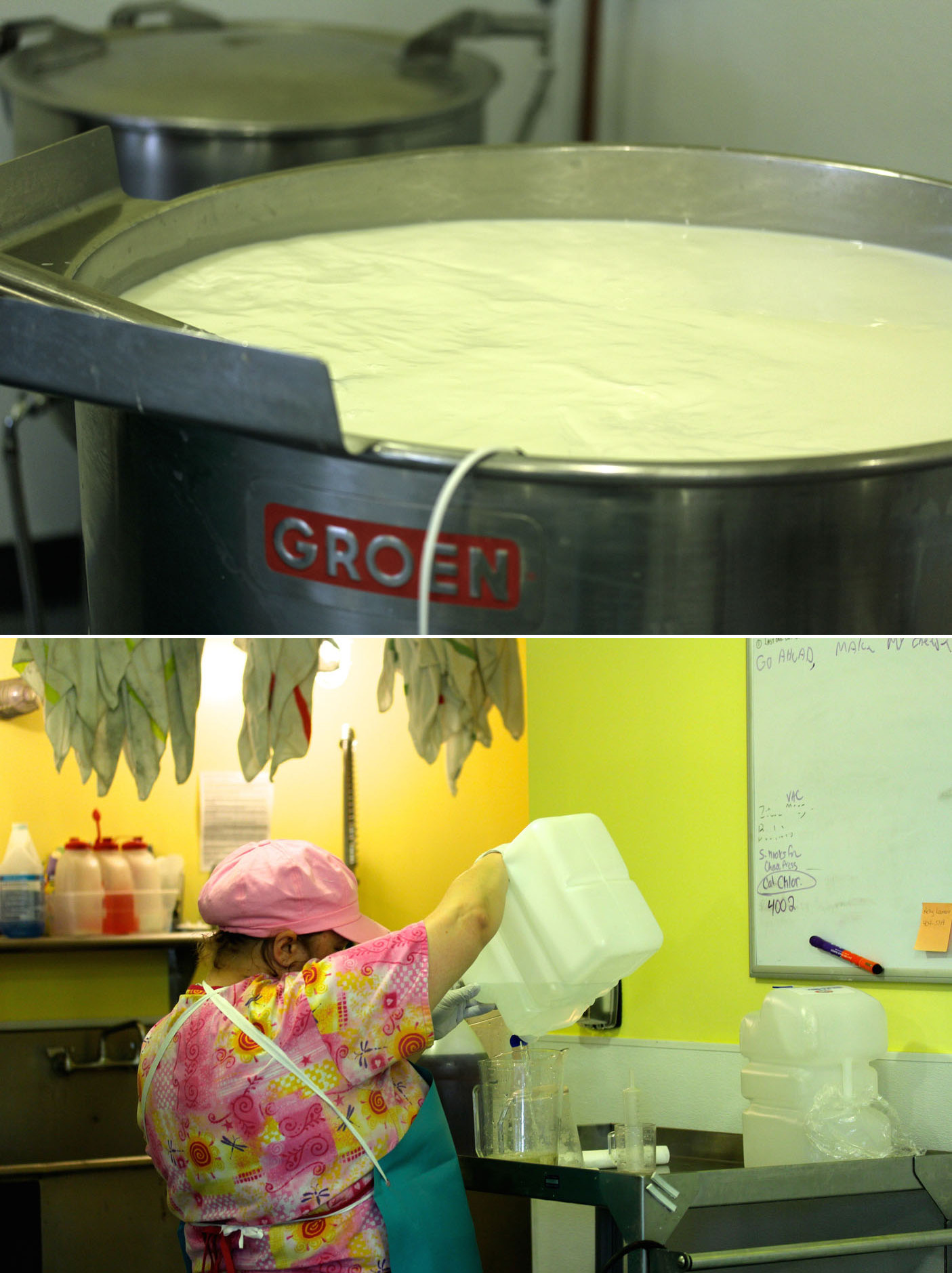 During one of my visits to Poor Orphan, I donned a sterile suit, hat, and rubber shoes to enter the cheese make room. The stainless steel tubs of swirling milk were spotlessly clean and shiny against the pale yellow walls. Bronwen, the Cheesemaker’s Assistant opened the affinage room (cheese cave) so I could glimpse the wheels of cheese ageing on shelves that must be flipped and rubbed twice weekly. While I observed, Bronwen measured out kosher vegetable rennet to pour into the milk to coagulate the butterfat into curds. The whey that separates out as the curds harden is siphoned off and passed on to local hog producer or spread on pasture as organic fertilizer during the summer months. 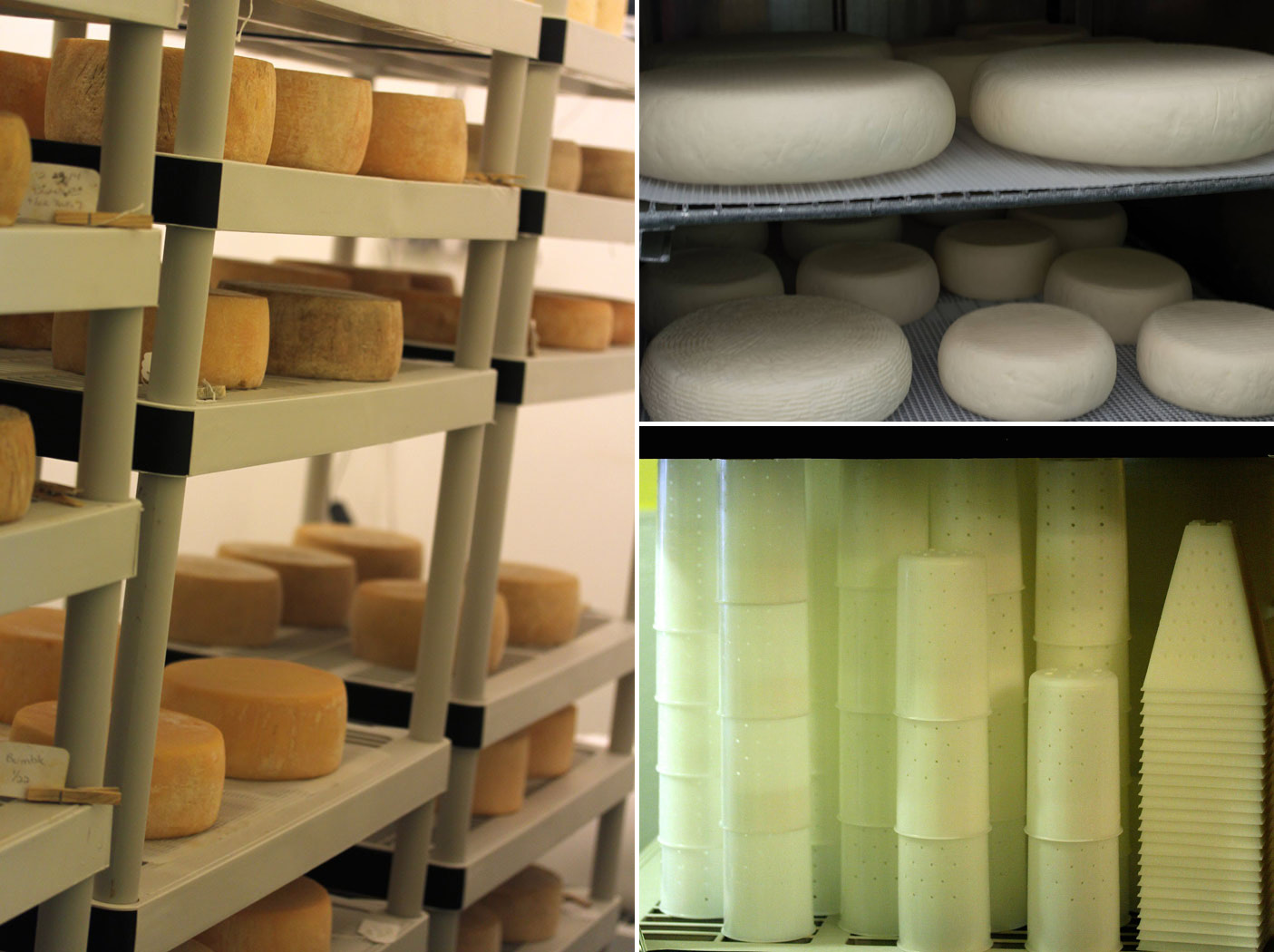 Poor Orphan cheeses have developed a following. Lark reports that at the Bozeman Bogart Farmer’s Market the queue of buyers is 10 deep. One of my own favorite Poor Orphan cheeses is the new Monroe, triple cream soft cheese so-named for the starlet, Marilyn Monroe for obvious reasons. My Austrian friend, Hasi, tasted Monroe and found it to be “as good as any French triple cream cheese she has ever tasted.” When I asked Lark why she makes so many varieties of cheeses she explained, “I am in the experimental stage. I want to glean feedback from customers while at the same time educate about the many flavor profiles of cheese.” Eventually Lark will land on her own distinctive farmstead cheese that reflects the flavors of her Southwest Montana village, her Icelandic sheep, and her own brand of goodness.

Poor Orphan cheese can be purchased from their website and at a few select retailers in Montana, New York, Idaho, and Wyoming. As with most artisan producers, keeping up with demand can be difficult and occasionally Poor Orphan cheese is out of stock.

Cindy lives in the Madison Valley where she grows heirloom vegetables and explores baking in her outdoor oven. A textile artist, her creations grace many Montana homes. She loves to explore foodways through travel, personal stories, history, and recipes. She helped found the organization, Madison Farm to Fork, in Ennis and is a regular contributor to the National Co+op Grocers' quarterly publication, The LEADer. Cindy has also been published in Zone 4 Magazine, and writes the Hagan Kids Letter a monthly newsletter with her brother about their family. Her former column, Root of the Matter, was a popular feature in The Madisonian newspaper. You can follow Cindy on her blog Petuniagirl.com.

I have great admiration for soft-spoken Lauren Oscilowski. While I’m no authority on gin and vodka, I’m immediately taken with her vodka, for the…