Encompassing a large stretch of land with few people residing on it, Montana is arguably best know for its high mountain peaks and glacial lakes in Glacier National Park, and its neon colored and steam gushing geothermic wonders in Yellowstone. Another astonishing viewshed is the Great Plains of Eastern Montana, a prairie landscape that stretches for miles upon miles.

This is the setting of a Montana dining adventure like no other, and the venue is a yurt camp on what’s known as the Kestrel Prairie, coined as the “American Serengeti.” The land is owned by the American Prairie Reserve (APR), and joined together with public lands, the organization hopes to create the largest wildlife reserve in the continental United States by linking together more than three million acres of private and public land on north central Montana’s legendary Great Plains. The mission is to preserve and rehabilitate the land back to what it once was, an oasis for a unique natural habitat that includes wildlife and native grasses and plants.

“We’re building the next great national park with a twist,” explains Hilary Parker, Communications Manager with the APR. “It will be privately owned for public benefit.” If it were a success, the reserve would be larger than Yellowstone National Park and equivalent to the size of the state of Connecticut.

Now in the development stages, the APR hosts fundraising and volunteer stays at the Kestrel Prairie Camp, and many have featured meals catered by Livingston chef Carole Sullivan of Mustang Catering. Here, people from all over the world convene to celebrate the wild landscape and it’s potential revival.

For a signature outdoor feast that is typically held on the final evening of a stay, guests dine on dishes that are representative of the West, such as a salad of local greens and braised bison short ribs served Provincial style, with kalamata olives and fresh herbs. Others dishes capture good old Americana flavors, such as a southern dish of fried catfish fingers with a lemon tarragon sauce. Sullivan finishes the meal off with a lemon goat cheesecake, made with organic goat cheese from the Bozeman based Amaltheia Dairy.

Getting the food there and preparing it is no simple task. “Many times, I’ve had to pack food for five days worth of meals for up to 12 people,” Carole explains. She has been catering events there since before electricity was hooked up, and travels with food in tow down miles of dirt roads to reach the Kestrel. But the travels there are well worth it for the views. 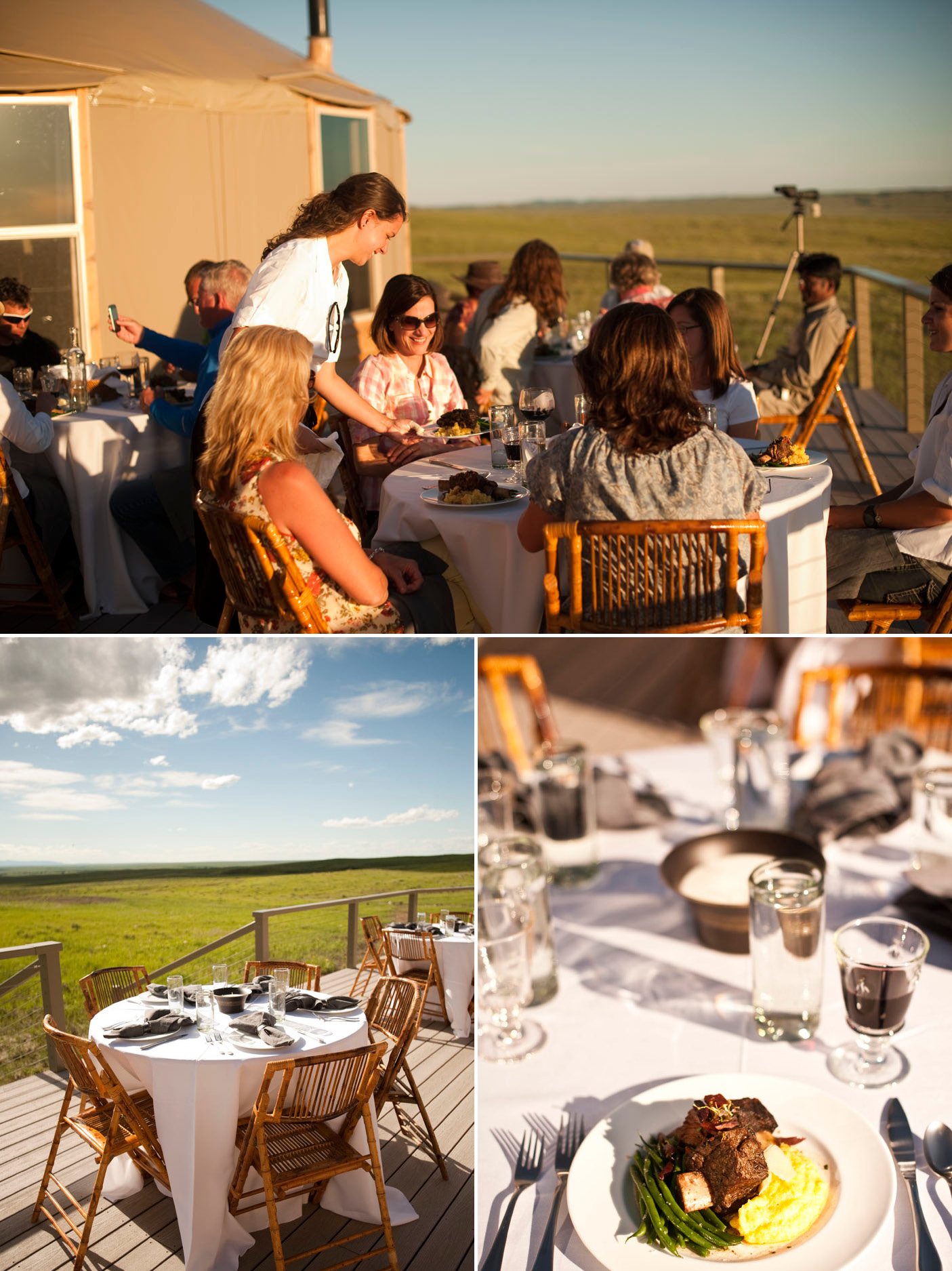 “It’s at one moment both exhilarating and peaceful, which is a rare combination,” Parker says. The last dinner typically involves flavor combination that coincides nicely with the landscape, a special treat after a long day of tearing down fences and moving rocks.

And after a campfire—with s’mores included—the guests can fall into bed in the nearby yurts, drifting off to the sounds of the grasslands blowing in the cool summer breeze.

Thank you to Montana Magazine, where the original version of this story appeared. Pick up the July/August 2015 issue for more great articles from around the state.

Corinne is a Bozeman-based freelance writer, writing for a number of national and regional publications and websites, including Country Living, Martha Stewart Living, The Land Report, and usatoday.com among many others. She’s passionate about writing about the local food system and all of the amazing people, from the farmers to the chefs, who make it work. She writes from her office at The Emerson Cultural Center. Check out her work at corinnegarcia.com.

My fist memories of skiing are my parents waking my sister and myself up in the darkest of hours on a Saturday morning. We…