Carter’s Brewery in Billings is in the running for the most innovative and adventurous brewery in the state. Though it’s nearly impossible to choose favorites among Montana’s 50-plus breweries—many of which are so good I selfishly hope word doesn’t get out so I can still get a seat at the bar—Carter’s manages to stand out among the crowd. 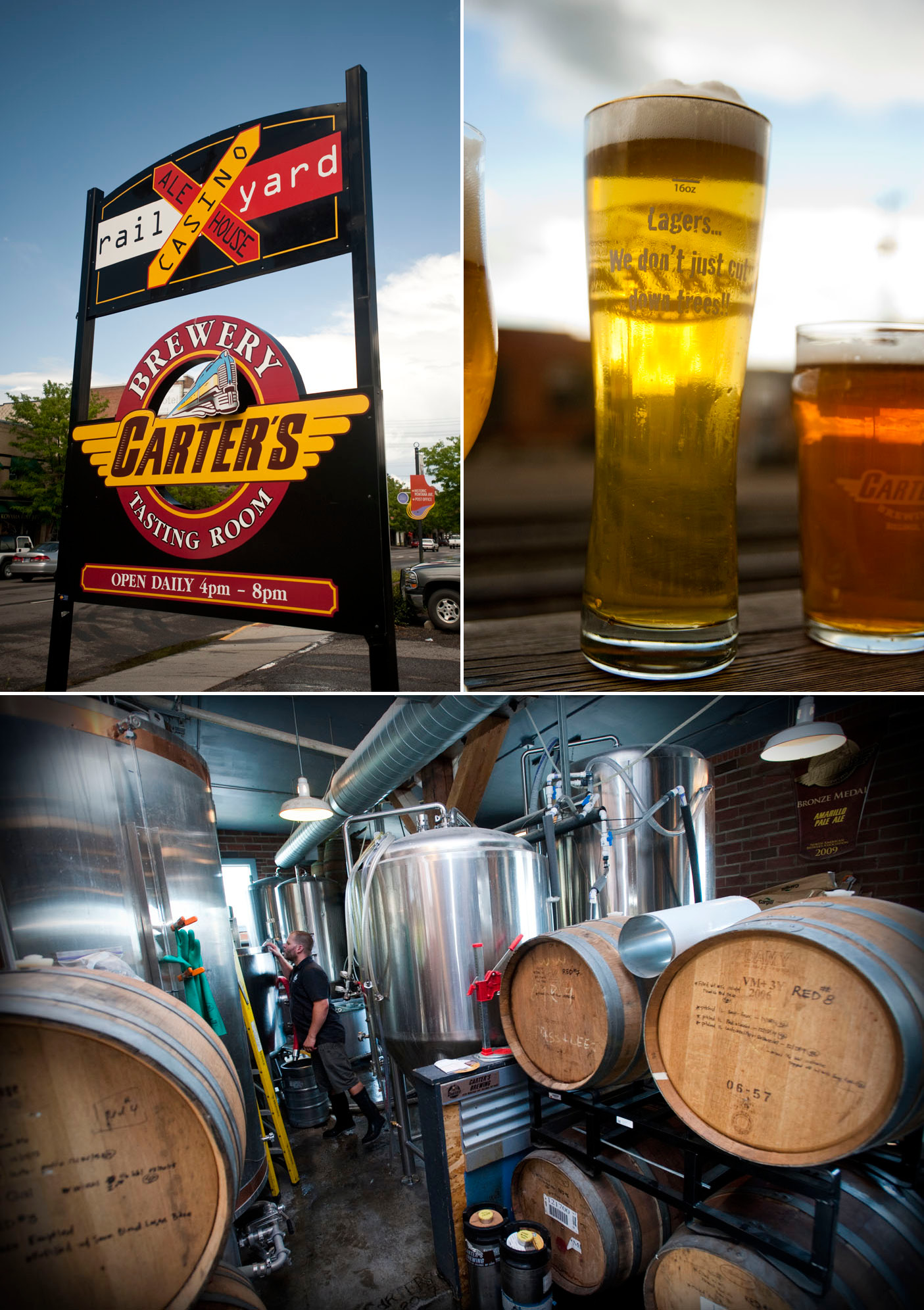 Situated between the railroad tracks and Montana Avenue in Downtown Billings, Carter’s gives a big nod to the locomotives chugging past their rail-side patio, aka The Loading Dock. If you can bear the deafening clatter, it’s a rush to stand outside and watch the trains go by just a few feet away while sipping Boxcar Brown Ale or Midnight Express Oatmeal Stout. Despite the noise and grit of the railroad, however, the taproom is welcoming, and the finesse in the beer is obvious at first sip.

Most impressive about the brewery is the sheer volume and variety of beer created in the small space. Carter’s boasts 16 tap handles, eight of which are occupied by a regular line-up and the rest see an ever-changing supply of seasonal and experimental beers. Owner and head brewer Mike Uhrich noted that the diversity of styles is what sets Carter’s apart: “We’re constantly experimenting, trying to push the envelope, or open people’s eyes and get them to try something else. There’s always something new.”

Not married to one cultural style of brewing, Uhrich explores old-world European styles alongside emerging American trends, while adding his own artistic variations. Among his best and most demanded beers are bitter, hop-packed India Pale Ales (IPAs) such as the De-railed IPA and Ghost Train Double IPA. Also popular are beers on the opposite end of the flavor spectrum: sweeter, yeast-dominated Belgian styles like the Farmhouse Ale Saison. Though they couldn’t be more diverse, one thing Carter’s beers have in common are bold flavors. These are unapologetic beers. Nuanced, certainly, but not timid.

On my first visit to Carter’s in July of 2014, I was floored by a Malbec Sour, one of Uhrich’s latest experiments. It had an aroma of red wine and oak followed by sourness that literally pinched my cheeks. Unlike any beer I’d ever had, it was also strangely familiar. Flavors that I knew, like smooth red wine and tart lemonade, were layered in ways I’d never experienced. These complex flavors were created by the wild yeast fermentation that characterizes sour beer in addition to the oak barrels, which lend essences of wine and wood during the aging process. This beer, I realized, was a work of art.

“Sour beer is a new thing for the United States,” explained Uhrich, “but fermenting with wild yeasts in oak barrels is the oldest way of brewing. That’s been done for hundreds of years, before they actually could isolate yeast and knew what it was. So, [making sour beer] is like taking a huge step backwards in history, but it’s also a really fun experimental thing to do.” Although the Malbec Sour isn’t a regular, you’re likely to find some version of sour beer on tap alongside pale ales, amber ales, Belgian tripels, pilsners and many other styles, all served in style-specific glassware to enhance flavors, aromas, and your beer-drinking experience.

To find out where you can get Carter’s on tap, click here.

Katie is a Bozeman native who has returned home to work, write, and play. She and her partner Jeff spent a summer traveling Montana from corner to corner sampling every brewery and writing about their experiences on their blog, Tap Routes. Today, she coordinates multiple programs at the conservation nonprofit, Western Sustainability Exchange, creating viable markets for sustainable food. When not working or writing, she gardens, cooks, eats, drinks, hikes, and camps. Her writing centers on food, farming, conservation, and craft beer, and appears most frequently in Rocky Mountain Gardening Magazine. More at katieplumb.com.

A Wolf Point Stampede isn’t the same without waiting in line in the hot summer sun to eat a “Catholic burger.” The infamous burger…