Last Tuesday, I interviewed Katy Harjes—who raises certified organic, grass fed and finished lamb with her husband Rich outside of Bozeman—for an upcoming post by Wyatt Nelson & myself about their annual Willow Spring Ranch Sheep Shearing Party. The Harjes’ are smack in the middle of lambing season, so Katy & I spoke on the phone between her walks to the pasture to check on laboring ewes and various bottle feedings. Though my family has attended a Willow Spring shearing, I mentioned that my kids had never bottle fed a baby animal. “Bring them out!” encouraged Katy, who is passionate about increasing awareness of sustainably grown, organic lamb and loves sharing hands-on ranch experiences with children.

I should mention Katy doesn’t invite everyone who phones the ranch out to bottle feed, but she and I go way back. We first met in New York City in the late 1990’s when she was the Associate Photo Editor of Departures magazine. I’ll never forget showing her my portfolio on my first trip to New York; she was one of the most memorable people I met that week. Chatty, animated and highly engaged, Katy even made calls to other AMEX Publishing photo editors (Travel + Leisure, etc.), telling them she had a photographer from Montana whose work they should see. Fast-forward to 2012. I was shooting Jay Bentley & Patrick Dillon’s cookbook Open Range, and the Art Director wanted to visit the ranch that provided Bentley’s restaurant with lamb. When I called Willow Spring to set up the shoot, I nearly fell over when the woman I was speaking with said, “Lynn…it’s Katy from Departures!” I had no idea where life had taken her, and I was not at all surprised to find her on an organic sheep ranch at the foothills of the Bridgers.

So this past Saturday, Dan and I loaded our three kids and our daughter’s friend and drove past Springhill for the noon bottle-feeding.

The Harjes’ herding dogs ran to greet us at the gate. “I’m just finishing my tea. I’ll be right out!” shouted Katy from inside as a young girl who looked about 10 years old stepped off the porch. “Hi! I’m Sofia. I’m from Washington DC,” she said, reaching out to shake my hand. “My aunt Francesca and I are helping out this week.” Behind Sofia scampered an adorable two-week old female lamb I’ve been seeing photos of on Facebook. “Would you like to meet PJ?” she asked the children, who immediately began stroking the animal’s soft coat. 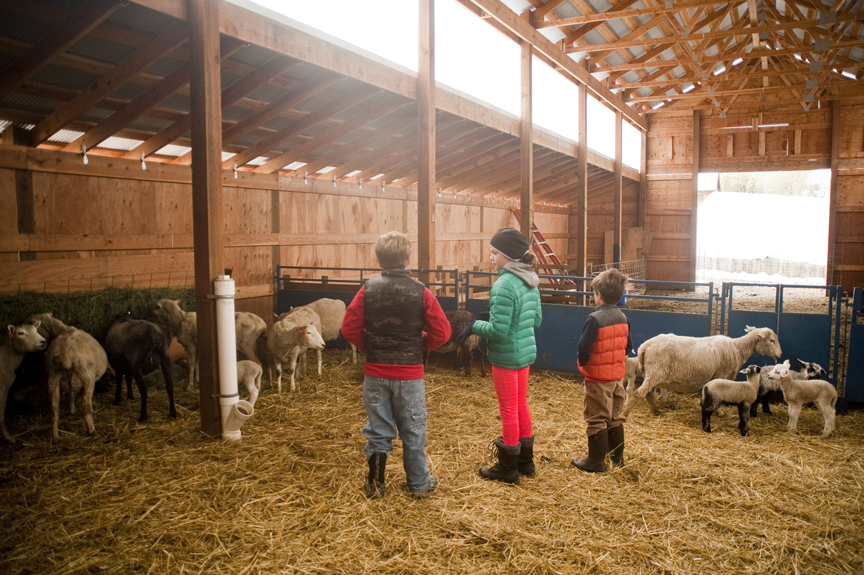 “PJ might just get her own Instagram account,” laughed Katy as we hugged hello. She asked Sofia if she’d walk the kids to the barn and introduce them to the lambs. Without missing a beat, the young girl began leading a tour like a seasoned pro.

Katy walked us into a pen with moms and newborns and pointed out the different breeds (Icelandic, Border Leicester, Blue-faced Leicester and Cheviot). I was in heaven photographing the protective ewes with their adorable babies; some of the tiny creatures got so close their noses touched my lens!

Soon, Sofia’s aunt Francesca (a friend of Katy’s from her kayaking days who lives in Baltimore and NYC) appeared—her arms laden with bottles. Katy lined the children up and demonstrated how to hold a bottle. Sofia plopped a hungry lamb in each lap, and the suckling ensued.

Smiles of sheer delight broke across the children’s faces. They carefully eyed the level of their bottles, making sure the animals didn’t drink more than the proscribed amount. Then a fresh crew was brought in. This continued until all were full.

Katy—a calm supervisor who stands back and lets events naturally unfold—had been keeping an eye on a mama in labor out in the pasture. She sensed the need to check the ewe, so I walked outside with her. A couple of hooves were visible, but something wasn’t right. The water sack was engorged, and the mom wasn’t acting normal. Katie dashed back into the barn to grab her long gloves and emerged with the entire group trailing behind. 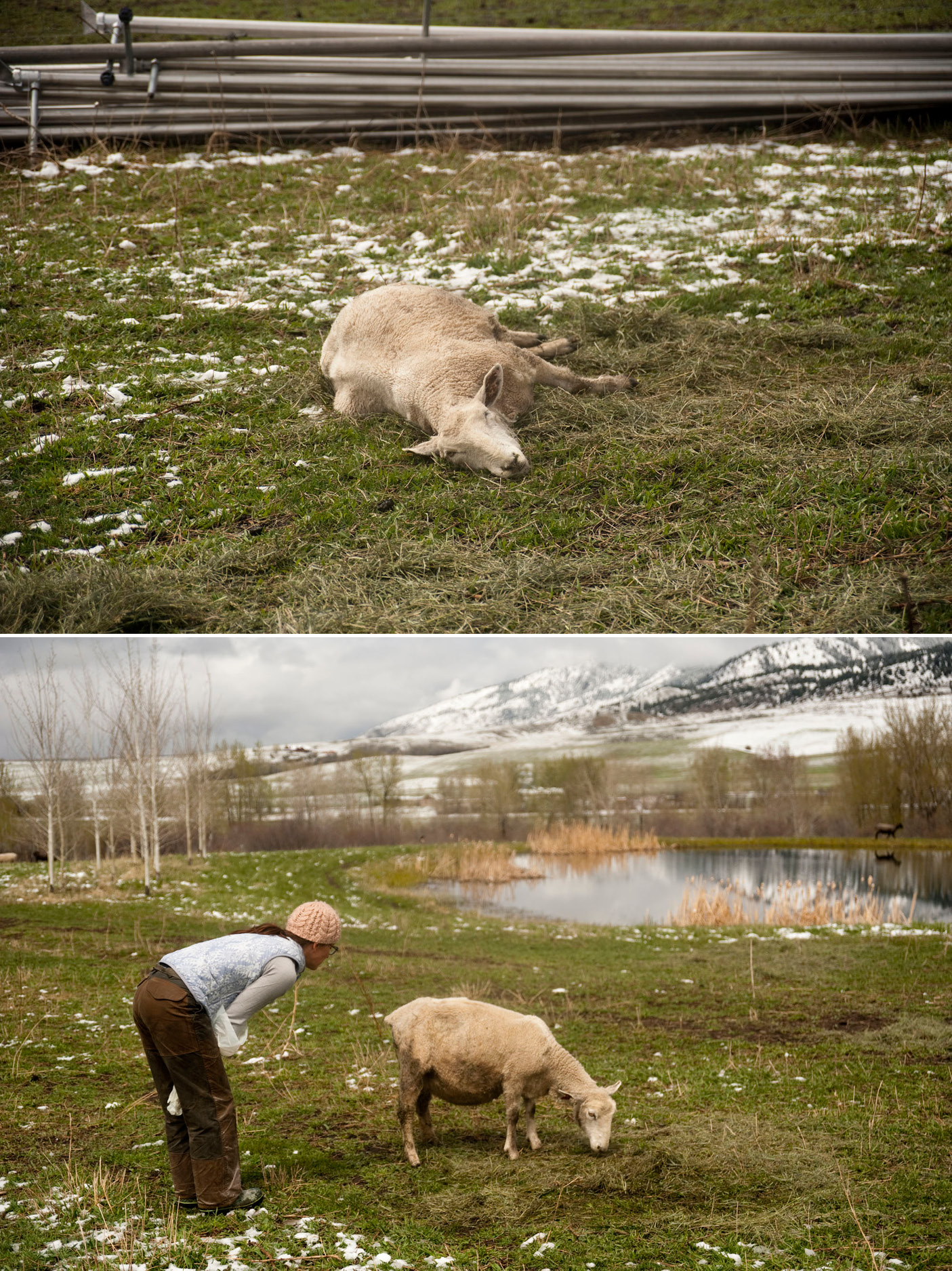 “I’m not a veterinarian, but I play one on TV,” quipped Katy as she snapped on the elbow-length latex gloves. (I didn’t want my kids to add another element of stress for the ewe—or for Katy—so I offered to move them back inside.) “You’re all fine,” assured Katy, unfazed. Sofia grouped the children about 15 feet from the ewe and instructed them to stand still

The ewe stood up and walked away as Katy approached, so Dan offered to help restrain her. Katy explained how to hold the animal and reached inside to assess the situation. The audience held its breath.

I’m not exactly sure what all Katy did in there, but when her hands emerged, they were gripped around the slithery lamb’s front legs. Inch-by-inch, Katy helped it glide out.

“Good job, Mama!” we spectators quietly cheered. Katy gently placed the tiny creature on the ground, and the ewe bent close to greet her new baby. 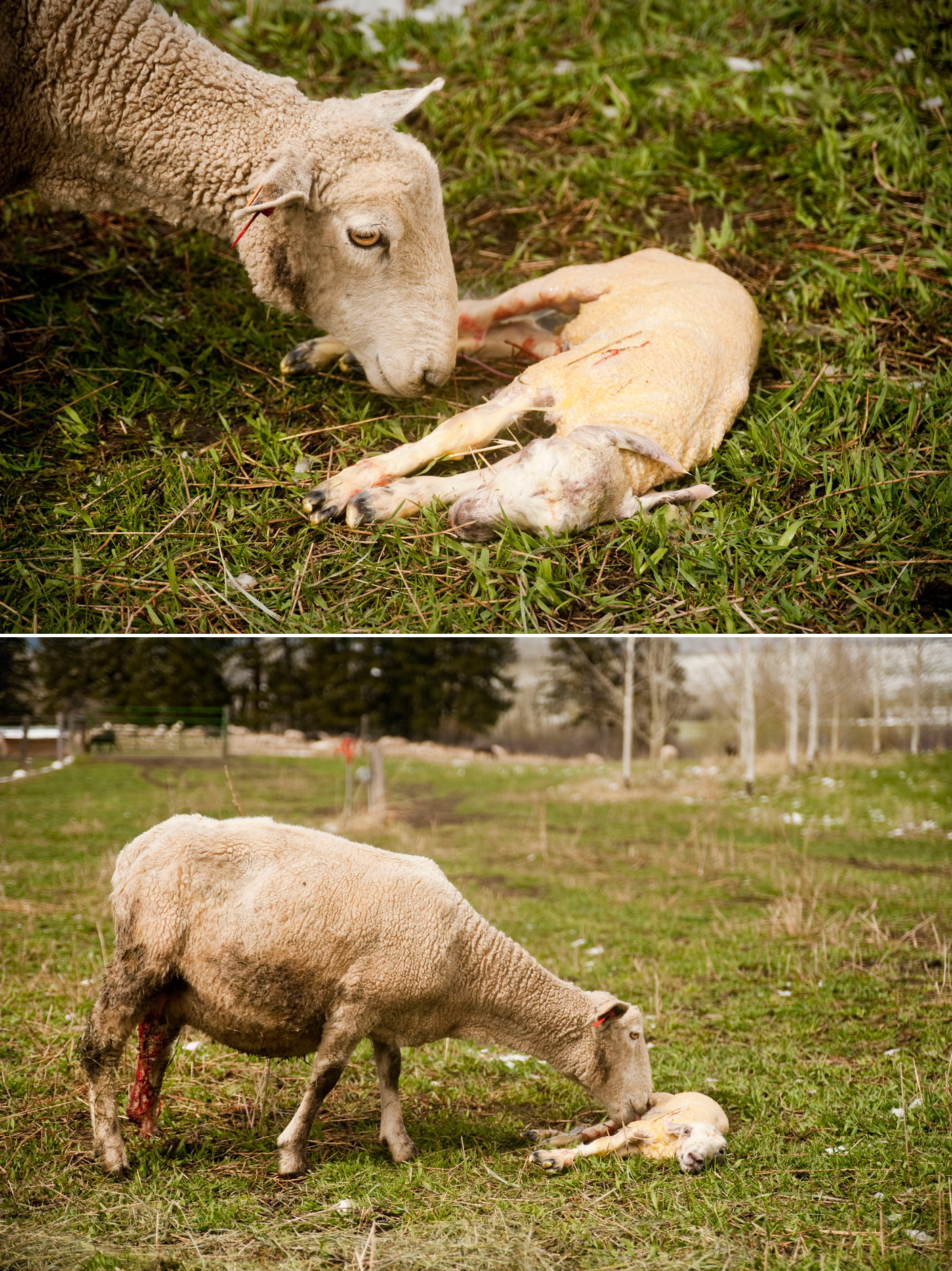 But the show wasn’t over yet. “It’ll be up and walking within five minutes,” informed Katy. “Keep watching!”

We did, and when the lamb stood, we could see it was boy. Naming him was a group effort: Jellybean Emmet Wilbur. (Or was it Emmet Wilbur Jellybean?) “Time for a second cup of tea!” declared Katy as we headed for the barn.