Butte’s first Chinese New Year Parade was more than two decades ago in 1993, on a sub-zero February day when a rag-tag group of locals ventured out and braved the sidewalks of Butte Montana.

I was one of those dozen people, my young daughter on my hip, celebrating the formation of the Mai Wah Society and honoring the legacy of Butte’s Chinese immigrants that once numbered over 2,500.

The original parade dragon – a homemade effort – was colorful yet lacked refinement. It had a head with Cool Whip containers for eyes, a center, and a tail, and was maneuvered by three people. The remainder of us clanged pot lids together.

Frankly, we were all a bit embarrassed.

But the annual parade has grown with every passing year. Now, some two decades later, the parade has the distinction of being the “shortest, loudest” Chinese New Year’s parade in the country.

For noise-making purposes we were granted an actual Chinese Gong from the proprietor of the Pekin Noodle Parlor, now in its 104th year of operation. This in addition to firecrackers and homemade noise-makers.

Now a permitted event, the parade snakes through the streets of Uptown Butte, escorted by our local police.

This February a real Chinese Ceremonial Dragon – a gift to Montana from the people of Taiwan in 1998 – danced through the streets of Uptown Butte in the hands of our local roller derby team, The Copper City Queens. Athletic and artful, they made the dragon dance sinuously along the parade route, darting and weaving through the crowd of a hundred or more revelers as the dragon chased “The Pearl of Wisdom.” Shouts of joy of the New Year were punctuated with noisemakers of all kinds.

The dragon makes stops along the way at designated businesses that make an offering. The dragon blesses these businesses for the upcoming year by chasing away evil spirits that may reside in their building.

The parade culminates outside the Mai Wah Cultural Museum, usually with the ignition of 100,000 firecrackers on a tall stand. This year, however, insurance issues precluded the firecracker display. Hopefully it will return next year.

Tables of cookies, New Year cakes, tangerines and hot beverages await the procession at the end of the parade. People mingle and wander inside the Mai Wah Cultural Museum. 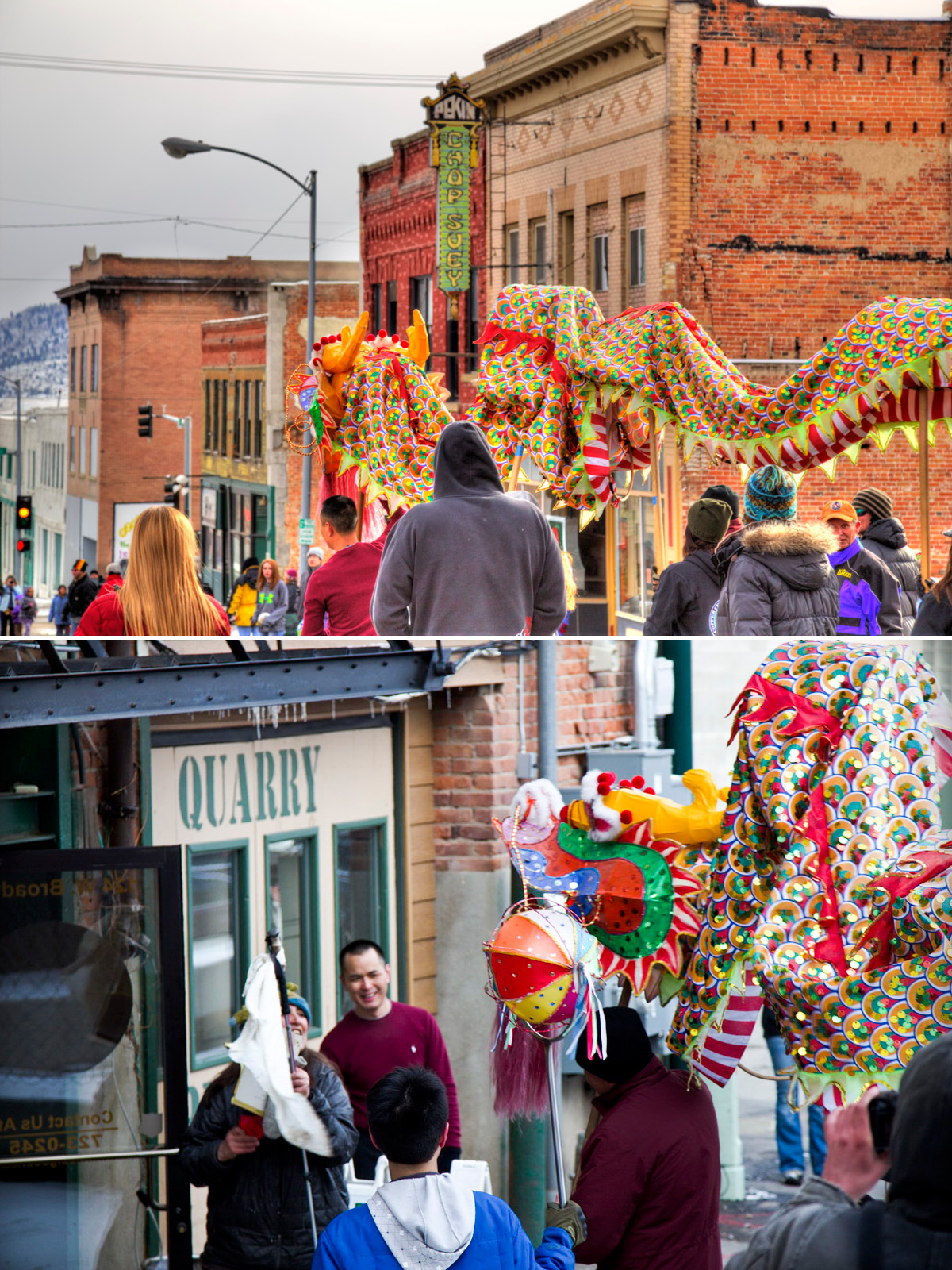 Many then wander off to dine around the corner at the Pekin Noodle Parlor, or head up to Quarry Brewing which has made it an annual parade day tradition to serve delicious pork and rice with craft beer in their family-friendly brewery.

This Chinese New Year Parade has become a celebration of the cultural diversity that was the essence of Butte. The Mai Wah Society, established in 1991, is the keeper of the Chinese culture that was drawn to the Rocky Mountain West and became an integral part of a world-class mining camp.

Mark your calendars for 2016 – the Year of the Monkey – the parade is scheduled for February 13.