Ask anyone in Helena for the best beer in town, and they’ll invariably point you toward the Blackfoot.

The brewery’s slogan sums up their goal: “Real good beer made by real good people.” Located downtown in Montana’s capital city, under the shadows of Mount Helena, Blackfoot is a quintessential Helena watering hole, bursting with plaid, puffies, beards, and even babies.

Lately, though, there has been an increase in suits and ties — not typical attire for a Montana brewery. The 64th Montana Legislature commenced on January 5, and with it, Helena received an influx of around 1,500 new residents. For a capital city, Helena is small, with just under 30,000 people — but every two years, it roars to life as our citizen legislature meets for a brief but busy 90 days.

An old sign left over from Blackfoot’s history as a homebrew supply shop.

Co-founder Smith explained that they do see an influx of patrons during the session, but the suits and ties are perhaps most notable. One regular quipped that they ought to institute a “no suits or ties” dress code during the legislature, he said.

More than that, Smith said, Montana is a big state, full of “diverse opinions and lifestyles.” The Legislature brings people from all over the state, from Eureka to Ekalaka, to Helena in a “melting pot of Montana culture.”

And there are few better places to experience that melting pot than the Blackfoot.

Kendall Van Dyk, a three-term former legislator from Billings, agreed, saying that “the Blackfoot is the perfect environment” for getting to know folks from your own party or from across the aisle in an informal setting. “Relationships are built at places like the Blackfoot,” Van Dyk said.

Any article on Blackfoot would be remiss without exploring what sets their beers apart, so brewer Becky Molm gave me a tour of the brewery. Molm is a story in her own right — she is one of only three female brewers in the entire state. 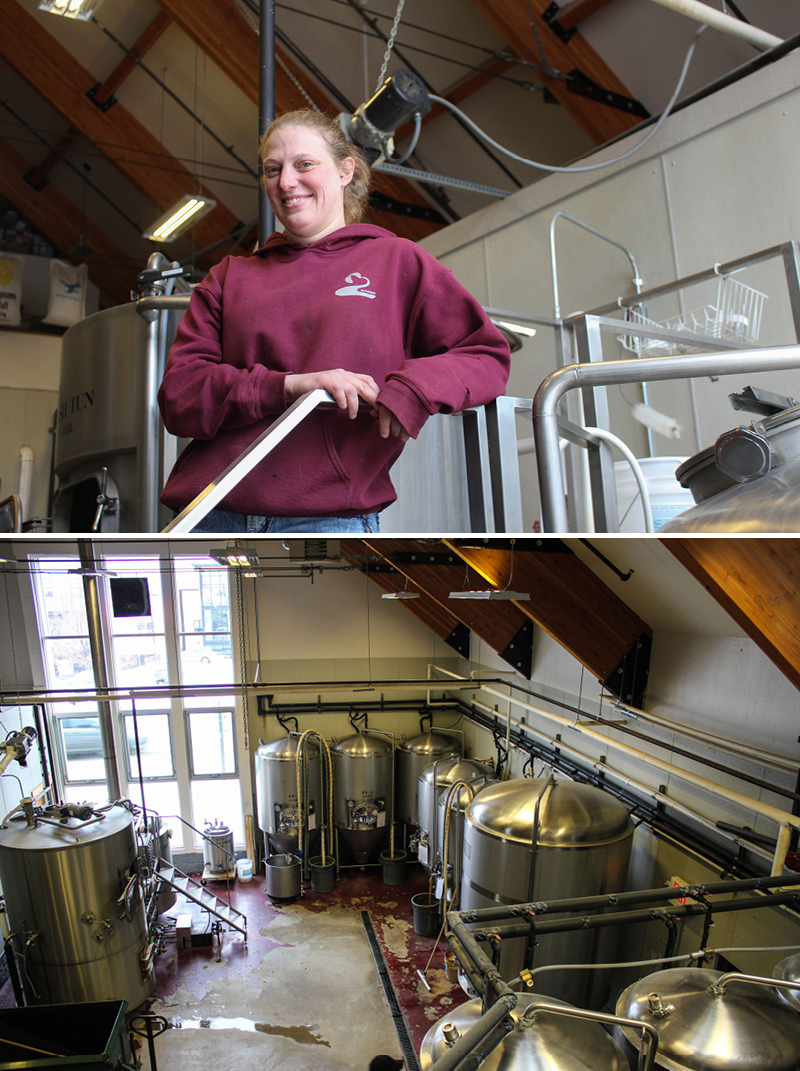 Top: Becky Molm, one of three female brewers in Montana; Bottom: the brewery floor from above

Blackfoot is the largest brewery in the state that doesn’t filter its beers, a nuance that adds body, flavor, and a bit of haze. Within the past couple of years, they’ve also transitioned from one-size-fits-all pint glasses to 12-ounce style-specific glasses.

The most popular beer is their Single Malt IPA, according to Molm. The Single Malt is brewed with crisp Maris Otter floor-malted barley, without any specialty malts or blending to get in the way. I wasn’t born an IPA lover, but in my opinion this is one of the best IPAs in the state.

In fact, I was perhaps most impressed by Blackfoot’s IPAs during my visit — their Single Malt, Winter, and Imperial IPAs are all excellent, built on solid malty backbones complemented by hoppy bitterness, instead of the tongue-scraping bitterness that some West Coast IPAs are known for.

If you’re after darker beers, the North Fork Organic Porter has a great roasted coffee flavor balanced by a bit of hop bitterness; the Double Black Diamond Extreme Stout is sweeter with a creamy head. Easy drinkers would enjoy the Cream Ale, with a medium body and crisp finish. 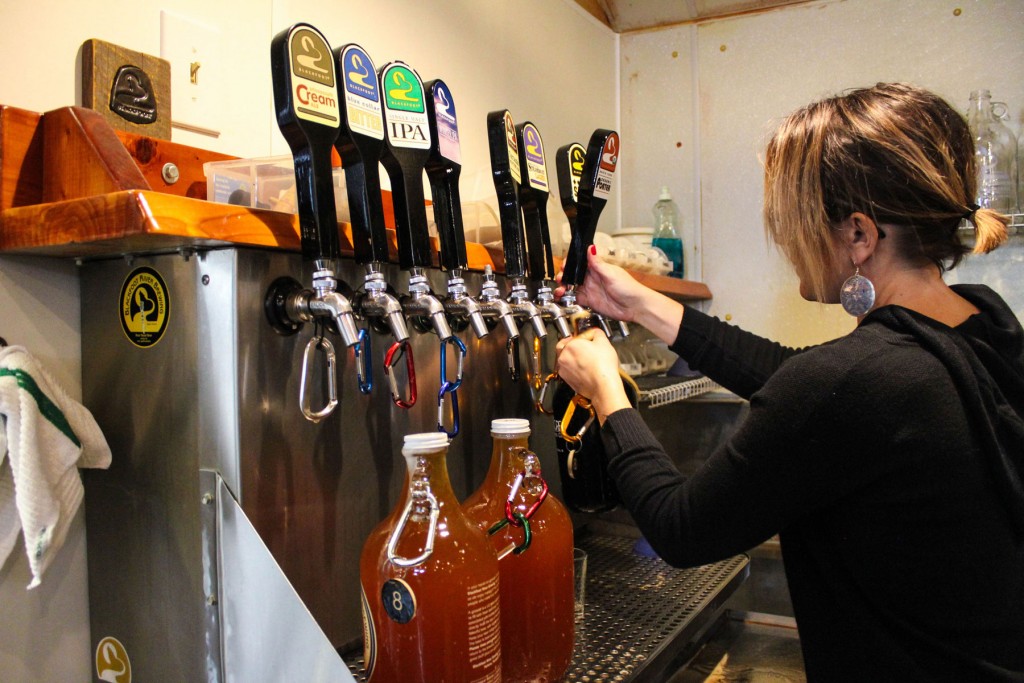 Wednesday through Friday, Blackfoot serves naturally carbonated, cask-conditioned beers from their Beer Engine. The hand pump will make you think you’re in an English pub (speaking from firsthand experience in both cases, however, the Blackfoot beer is much better). A final mightily impressive accomplishment is a lambic-style sour ale, dubbed the Helambic (get it?). The Helambic is inoculated with Belgian yeast, wild yeast, and lactobacillus, then fermented and conditioned for 16 months, before a final secondary fermentation in the bottle. 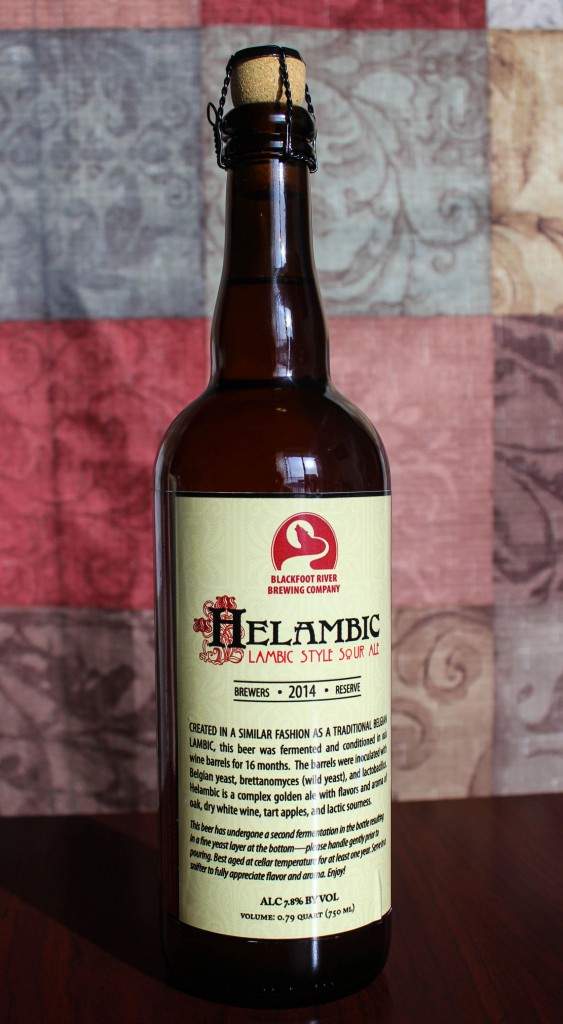 The result is 765 individually numbered bottles of golden ale with elements of oak, sour cherry, tart apples and a thick body with moderately low carbonation. This beer would age well in a cellar for a year or two. There are almost no Montana examples of this style, making the Helambic all the more special. 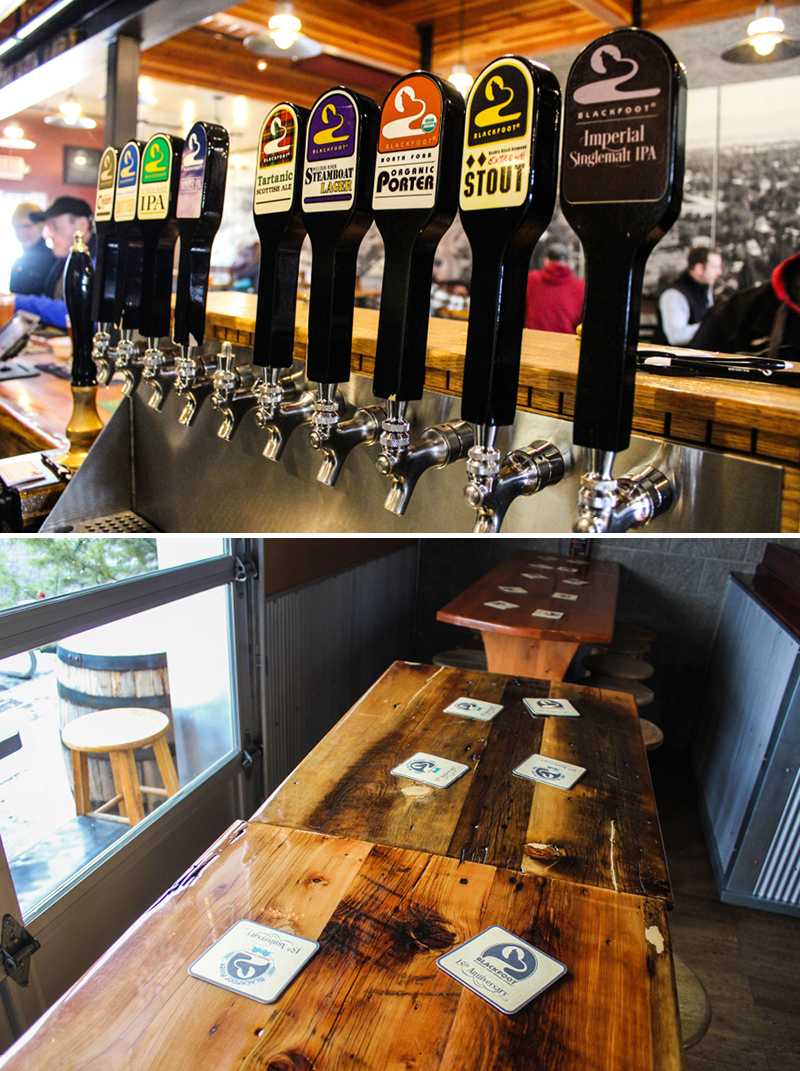 Back at the taproom, I dove into the sampler I’d ordered (all in the name of research), and the community tables around me quickly filled. A couple sat down next to me, immediately engaging me in conversation about good beer, the Legislature, and what makes the Blackfoot such a special place.

As I looked around, I saw beards poking out of flannel shirts, a couple suits, young faces, weathered faces, and an impressive three separate groups towing small children. Montana breweries are focal points of community culture, and Blackfoot exemplifies this.