For years I’ve wanted to wake up on New Year’s Day in a little cabin in the woods. I’d snowshoe right from the front door, soak in hot springs, share winter cocktails with friends, sled with the kids, and stoke the wood stove warming the cabin.

This year was a dream come true. We gather some friends and drove the 3.5 hours from our Livingston home to Elkhorn Hot Springs.

We’ve been there several times before, but this was our first New Year in the rustic 1900s cabins. My family of four stayed in the Beaverhead Cabin, while two other families rented cabins just footsteps away.

As soon as we arrived I took off on a solo snowshoe in the woods. New Year’s Eve is also my birthday and my tradition is to spend time alone in the woods on my day. Elkhorn is on a Forest Service lease, so within three minutes of leaving our cabin, I was on one of the many snowshoeing/cross-country skiing trails the Forest Service maintains. 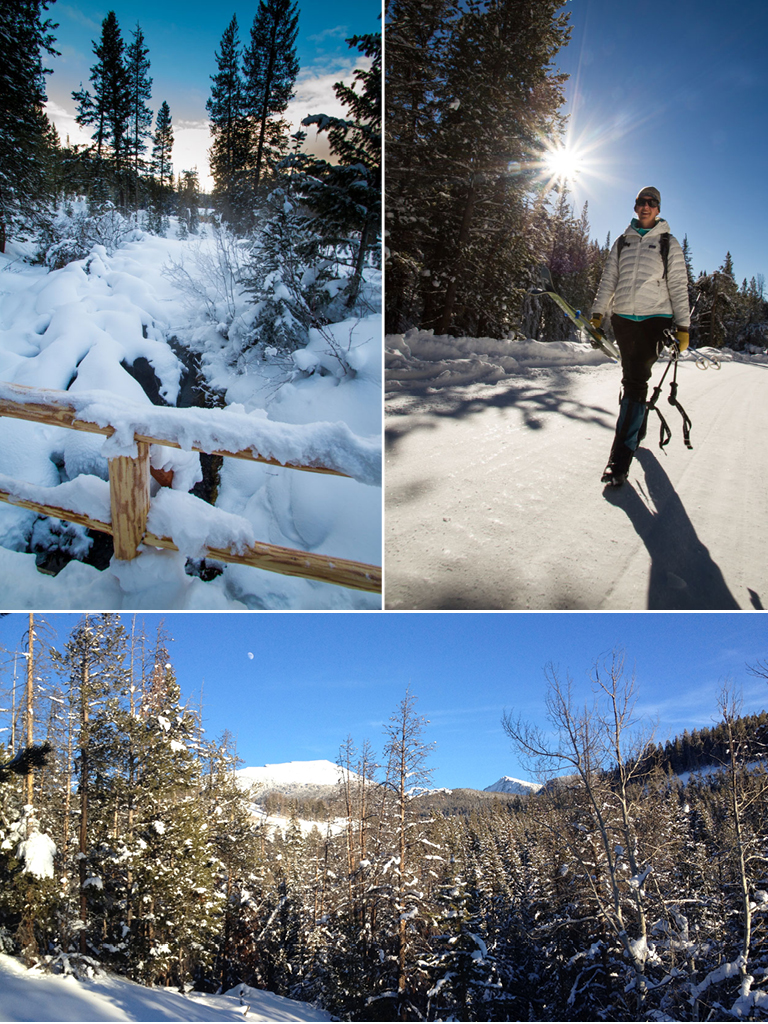 The low December sun had already dropped below the Pioneer peaks—shadowing the narrow valley—when we arrived at Elkhorn Hot Springs. Despite the impending darkness, I headed up the Grasshopper Ridge Trail ascending through dense conifers to a lookout at Solarium Point.

From the lookout, I gazed south three miles to Maverick Mountain where we would be downhill skiing in two days, and beyond to the Big Hole Valley. To the north and east, the mountains—Highboy, Comet and Saddleback—and twenty miles of trails awaited us on this long weekend away from home.

I continued up the trail to a large ridge-top meadow with snow so deep the dogs could barely walk outside my snowshoe track. I paused, breathed deep and drank Good Earth tea from a thermos. I continued on, back in the trees now, eventually reaching a road that lead back to the cabins.

A man driving a Bobcat dropped off what looked like a cord of wood on the porch of the cabin, promising to bring more should we need it during our two-night stay. So, we stuffed the wood stove and the fireplace with fir and heated the big, leaky log building while we refueled on chili and bread and greeted the two other families as they arrived. We shared dinner and drinks while the kids played Uno. 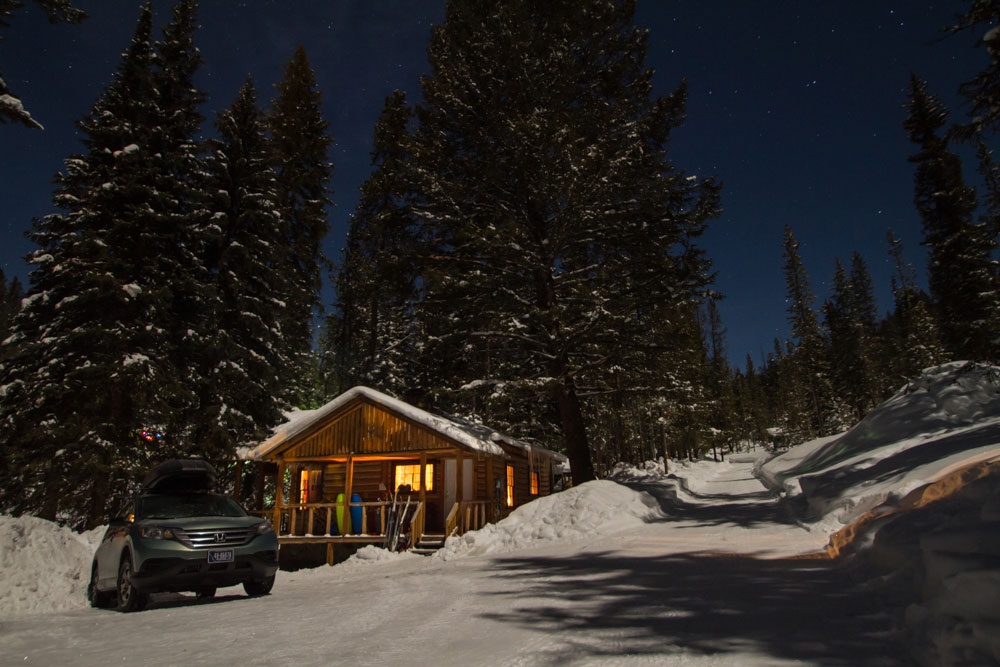 Later that evening we walked up to the hot springs—a turquoise swimming pool surrounded by fresh snow. Families splashed in the pool and a group of college kids celebrating New Year’s Eve with everything they had, swigged cheap beer out of cans. We soaked until a fight broke out and huddled our kids into the changing rooms. 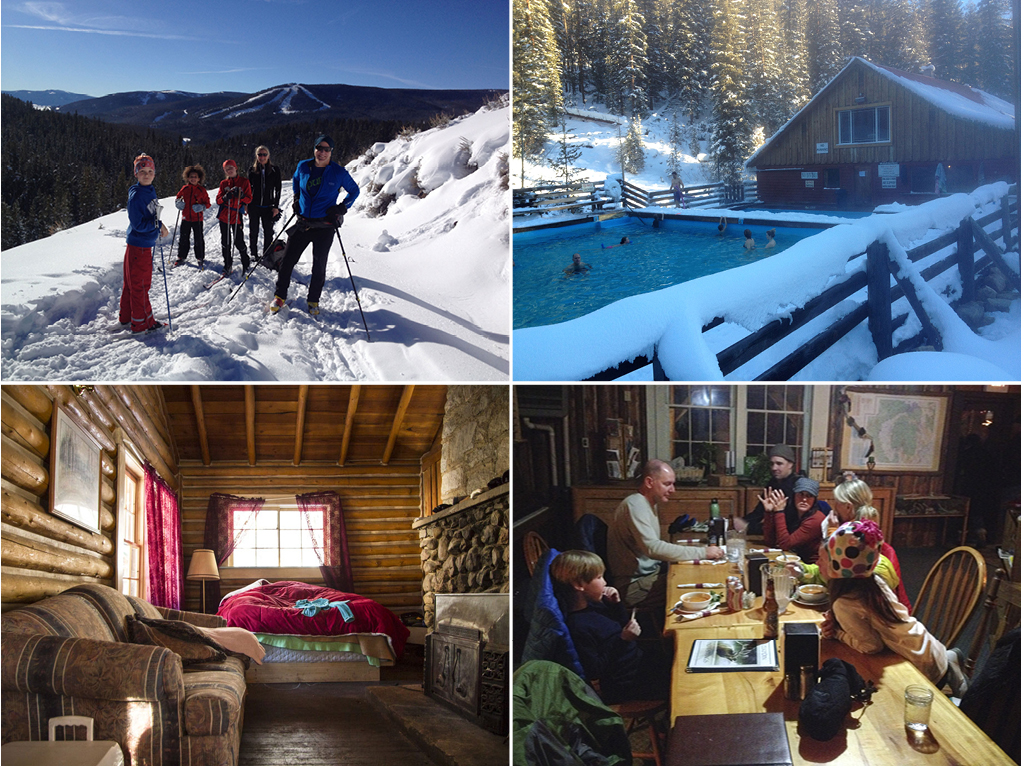 Laying on my bed that night, buzzed out from soaking in mineral-rich water heated in the earth, I couldn’t wait for the rest of the trip. Snowshoeing, cross-country and downhill skiing, more soaking, Elkhorn’s famous prime rib dinner at the dining room (OK, I didn’t order it, but my friends did and I can attest that it was a Montana-sized portion), and hanging out with friends on a winter weekend getaway. 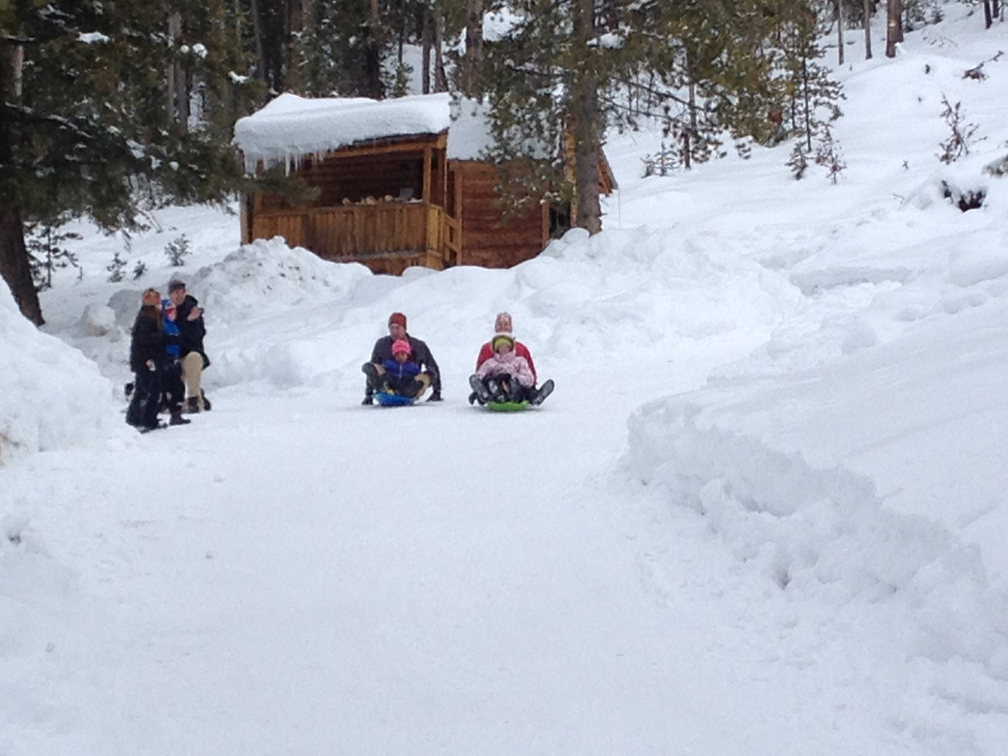 One of the highlights of the trip for the kids was sledding down the road connecting the cabins. They’d load two kids per sled, and fly down the snow-packed road. It was a highlight for the adults, too.

Thank you to Snowshoe Magazine, where the original version of this story appeared on January 12, 2015.

Here’s what you need to know to plan your own trip to Elkhorn Hot Springs: