For such a light and airy confection, the mighty marshmallow has the power to summon good memories any time of the year. 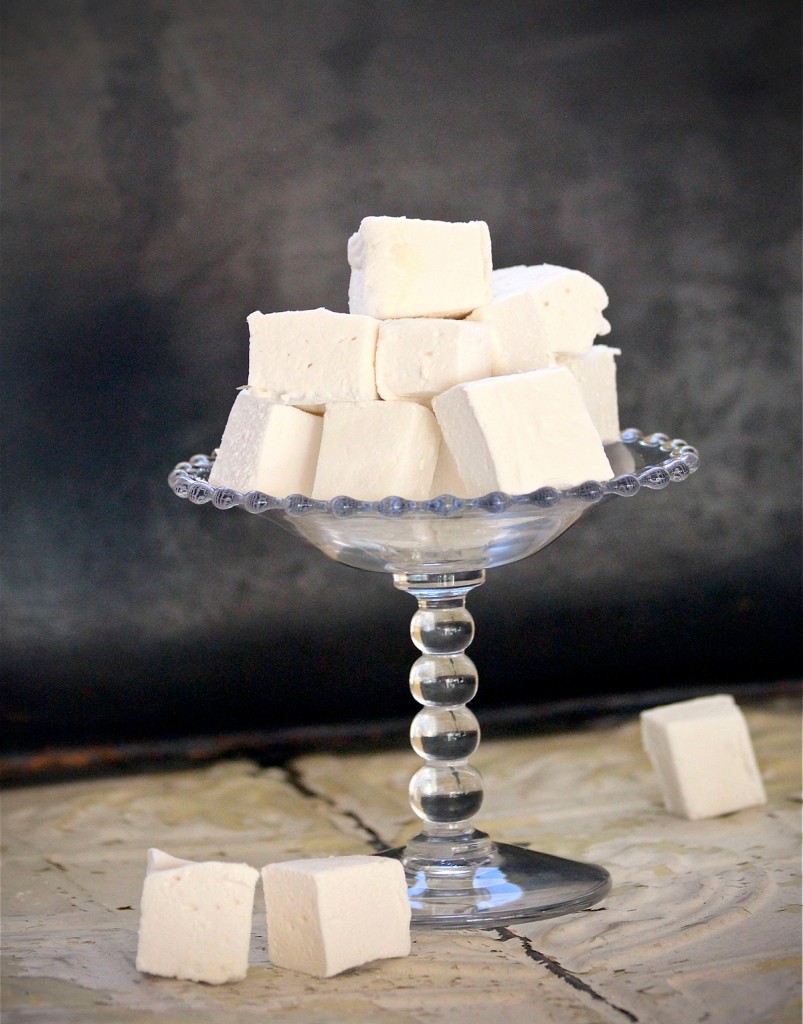 Just the glimpse of a bag on the market shelf and I flashback to summer. Camping with the family and sending my girls into the forest to find roasting sticks (not too thick, not too thin). And after dark, by the campfire and the light of the stars, roasting marshmallows (I like mine charred) to perfection. Think of that melty toasted goodness mashed with chocolate between two graham crackers (have you ever met a person who could resist s’mores?). It’s an iconic food campers all over America pack up each summer. 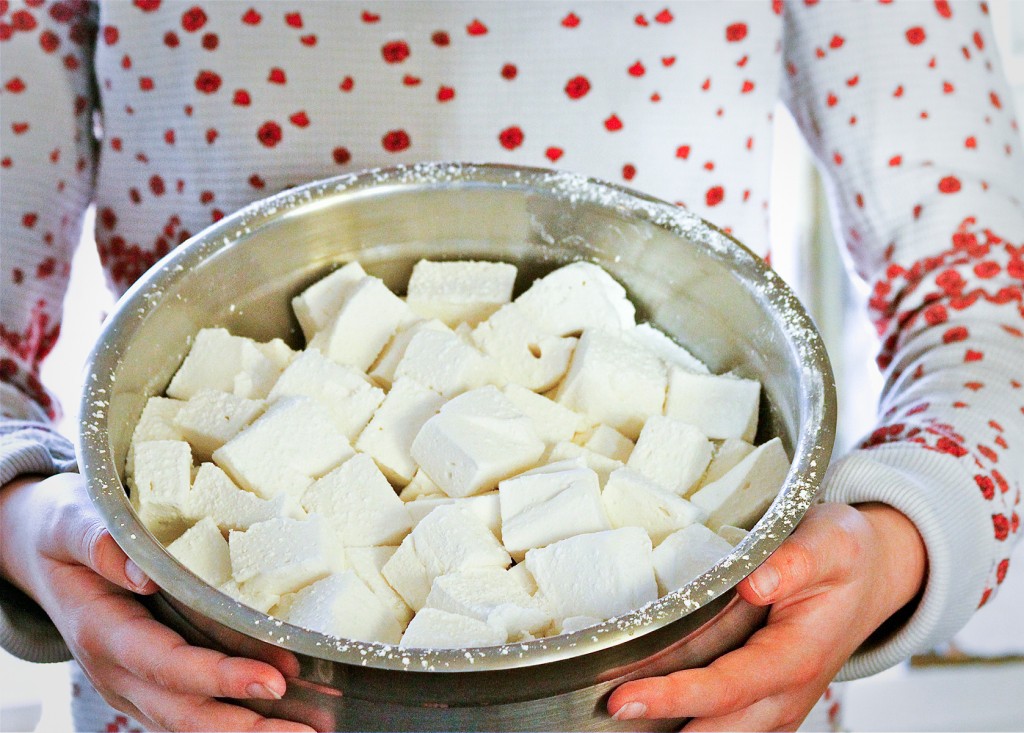 Unlike ice cream, say, or cotton candy, both sweets that rouse the sentimental yet seem best when it’s hot outside or when the county fair comes to town, the marshmallow is a treat for all seasons. It’s the binder for Ambrosia, that notable picnic potluck item. And it’s what makes Aunt Mildred’s plate of holiday yams more palatable. In the colder months, the marshmallow holds its own. On a chilly day outside, who doesn’t welcome that luscious sweetness in a mug of hot cocoa? Even in spring, when colorful Peeps pop up on grocery store shelves, the pillowy chicks bring the nostalgia of Easter baskets and celebration. 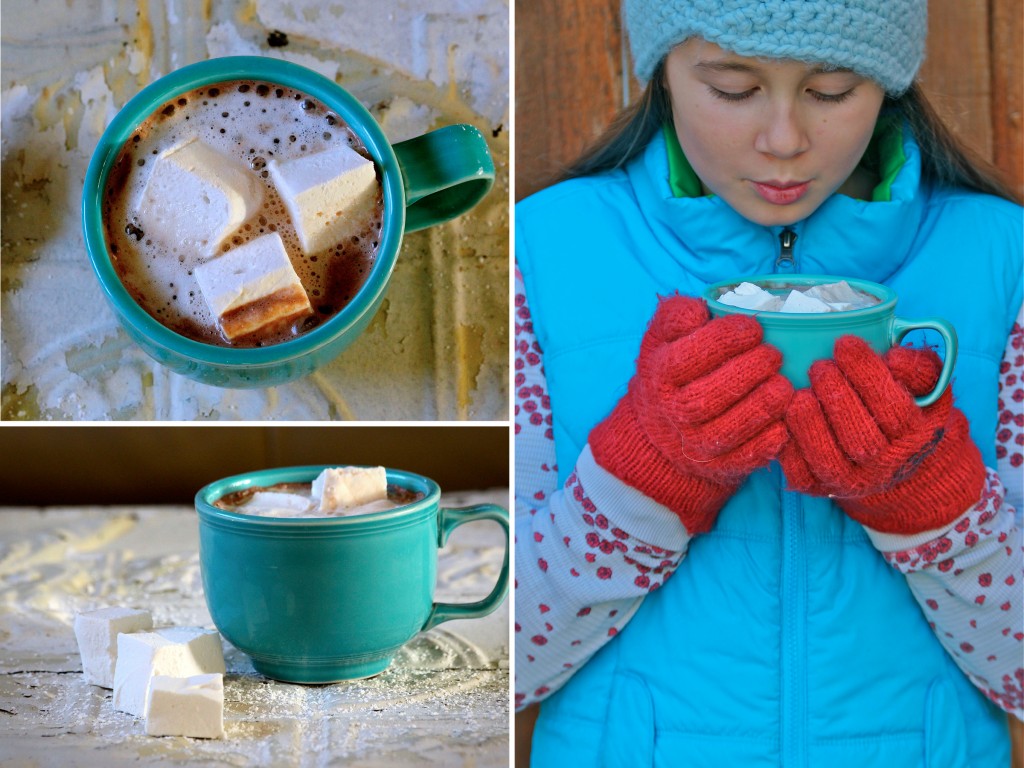 Interestingly, for all references to fluff and softness (It’s a marshmallow world in the winter …), this little bit of spongy candy has a long history dating back to the Egyptians, who apparently used the marshmallow plant root “in a honey-sweetened confection useful in the treatment of sore throat …”. According to Wikipedia marshmallows were used as a medicinal treatment for centuries. Of course it was the French (in the 1900s) who thought of adding eggs to turn it into a whipped treat to sell at confectioneries. But in 1948 an American “industrialized” the sweet treat through an extrusion process that resulted in what we all think of as the iconic marshmallow. Plus,it’s the only confection that is both a noun and an adjective (not bad for fluffed up sugar). 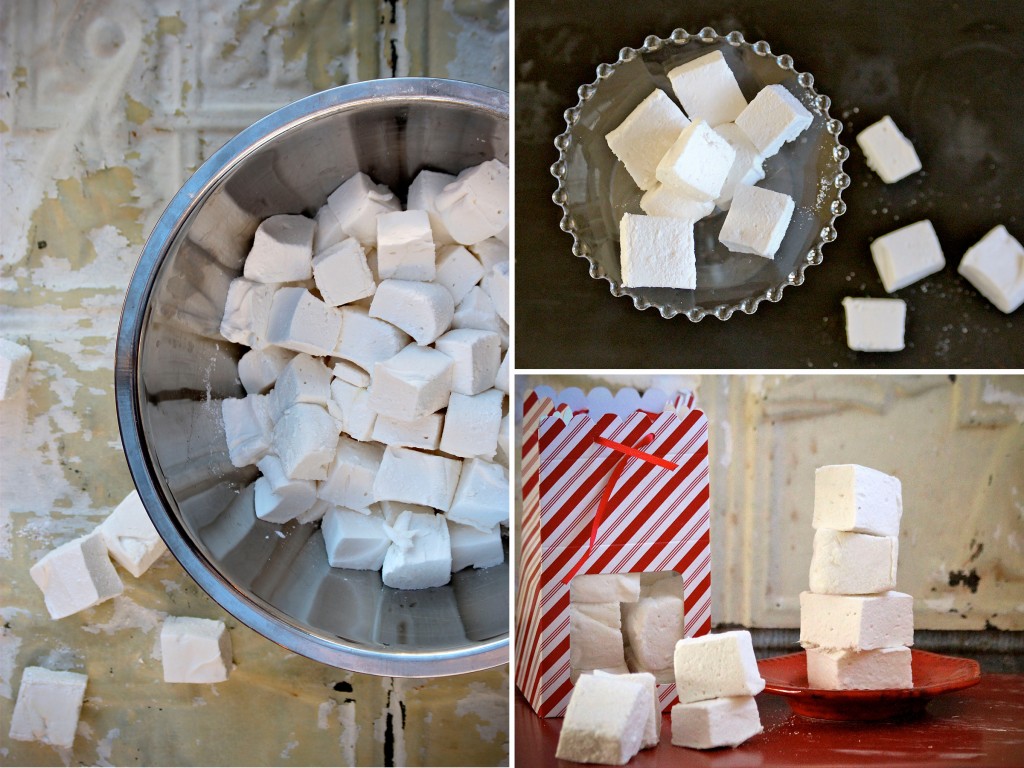 This Christmas, instead of baking cookies, I made marshmallows. Slightly more precise, but not as time-consuming as a person might think, the results were worthwhile just for the response from my friends and family. “Are these homemade?” one friend exclaimed, plucking the package from her gift basket. “They’re just too pretty to eat!” Another simply sat down and ate the whole box of 10 by herself (let’s talk sugar addiction) and asked if she could buy another box from me to share with her family. While making holiday gifts for friends this year, I’ve tried several recipes. Some have been fussy, calling for egg whites and, therefore, a short shelf life. Another used cream of tartar for a fabulously fluffed result, but a bland taste. At last I found this one, adapted from the Culinary Institute of America Baking at Home cookbook (Wiley, 2004), it is straightforward and the mix sets up quickly to consistently produce great marshmallows. What makes it unique is the ¼ cup of honey, which really does make a difference in the flavor. 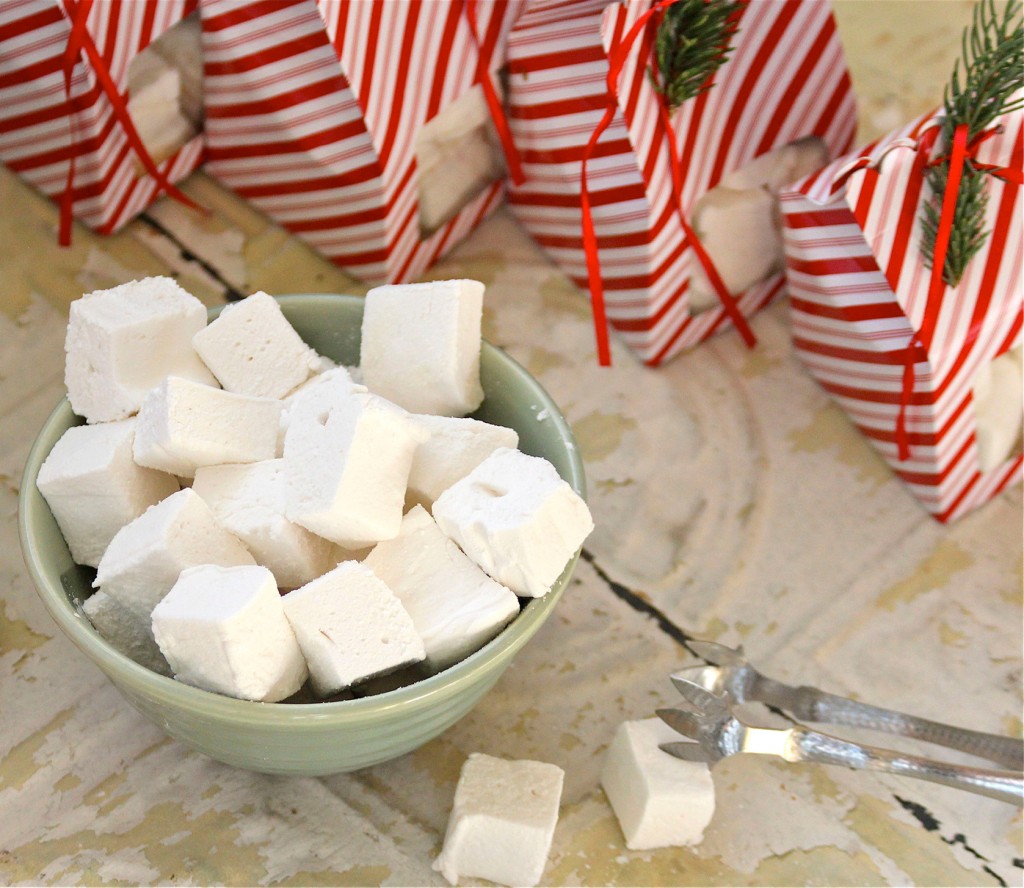 One friend opened the box straight off and popped a square in her mouth (That’s my style, too!). Making sounds of ecstasy as she reached for another, her husband told me that she just had a marshmallow epiphany. Barring the mildly sacrilegious inference, that’s one of the best compliments I’ve ever heard about my cooking. I hope you’ll think these are just as good when you make them at home. 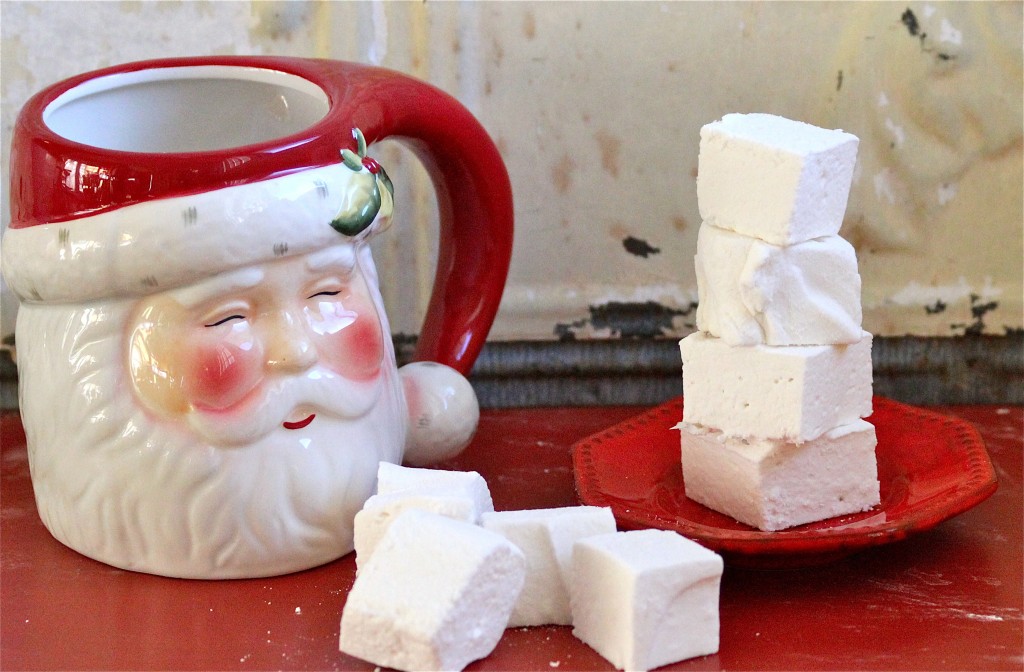 Begin by cutting two 8 x 16-inch rectangles of parchment paper. Lightly coat and 8 x 8 x 2-inch baking pan with cooking spray. Lay one strip of the parchment in the baking pan, pressing it to the bottom and sides. Lightly coat the parchment with cooking spray. Lay the second rectangle across the pan in the opposite direction to form a cross. Press the parchment to the bottom and sides of the pan and lightly coat with cooking spray. A few inches of paper will overhang each side of the pan. Combine the granulated sugar, honey and corn syrup with ¼ cup of the water in a heavy saucepan and stir until combined. Bring to a boil over high heat, stirring constantly. As soon as it reaches a boil, stop stirring. Insert a candy thermometer and continue to cook without stirring until the mixture reaches 240°F. Remove from heat, pour the mixture into the bowl of a stand mixer fitted with the whisk attachment, and let cool undisturbed until it reaches 210°F. Meanwhile, sprinkle the gelatin over the remaining ½ cup of cold water in a small bowl and stir to break up any clumps. Let the gelatin soften for about 2 minutes. Heat the softened gelatin over simmering water or in a microwave for about 20 seconds on low power until the granules melt and the mixture is clear. Stir in the vanilla extract. Mix the gelatin into the cooled sugar mixture. Beat the sugar mixture on high speed until it is white and foamy and holds a medium peak when the whisk is turned upright. The bottom of the bowl should still feel very warm.

Pour the mixture into an even layer in the prepared pan. Spread it gently with a spatula to level the surface. Freeze the mixture until set, about 30 minutes. Prepare a cutting board by sifting 1 cup of the confectioners’ sugar evenly across the surface. Remove marshmallow-filled pan from the freezer and lift the parchment from the pan to remove the slab of marshmallow. Lay the slab onto the sugared cutting board and peel off the parchment. Using a lightly oiled knife cut the slab into 1-inch squares. Sift the remaining 1 cup of confectioners’ sugar over the top and gently roll the squares in the sugar to coat evenly. Shake off excess sugar, then package or store in a cool dry container.