As the parents of a child who exhibits what might generously be described as ‘quirky’ tastes, we are challenged annually with delivering a birthday gift that meets her non-mainstream requirements.

For her 8th birthday, we were determined to come up with an idea that was both quirk-appropriate, but also not going to result in more plastic stuff in our toy-engorged house. After months of research, my wife came up with an idea that held promise: dog sledding! She loves dogs, and we could tie it together with a little overnight getaway to Chico Hot Springs, not everything has to be about the birthday girl.

So, having made this bold decision, we booked our room and tracked down Absaroka Dogsled Treks, a group who outfits right out of Chico for extra-added convenience. As their website suggests, a dog sledding trip “…offers winter fun as you’ve never experienced it before!” Sold. We spoke with the friendly folks there and booked the trip for February, a few days before her birthday.

On the day of our trip, we took care of paperwork and such at the office located within the Chico compound, met our guides (or mushers, I suppose), and caravanned over to a trailhead in the mountains just a few minutes to the northeast. 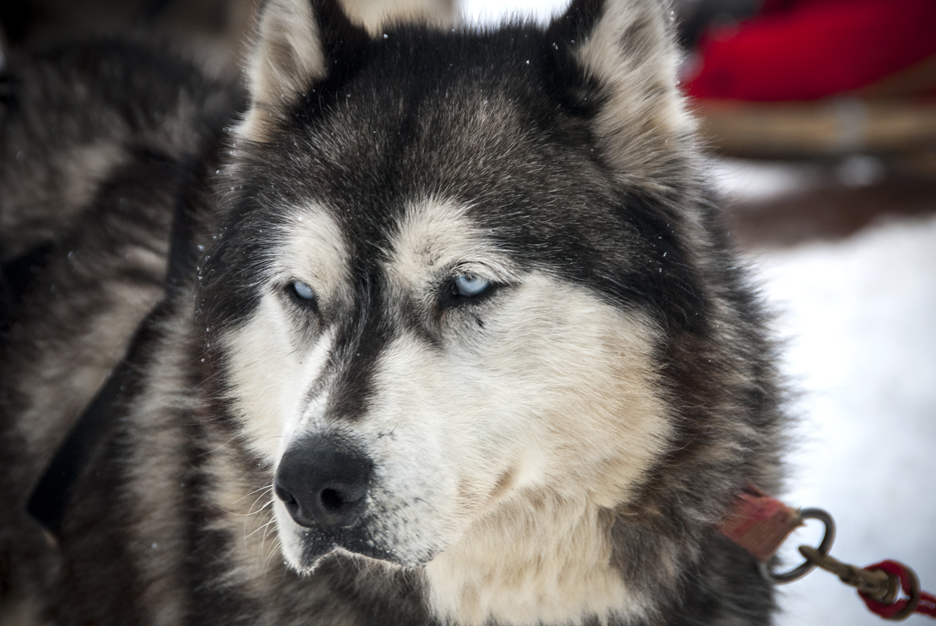 The weather was great, not too cold, and there was plenty of fresh snow. I had pictured a peaceful winter wonderland, but in fact there was a lot of noise—barking, and a lot of it—emanating from the guides’ truck. Apparently sled dogs really, really like to do their job, so they were practically bursting with canine vitality. That continued as the guides harnessed teams of 5 and 7 dogs to each of several wooden type sleds. It was a bit disconcerting for us, but the guides were clearly used to this process and just ignored the cacophony echoing off the canyon walls. 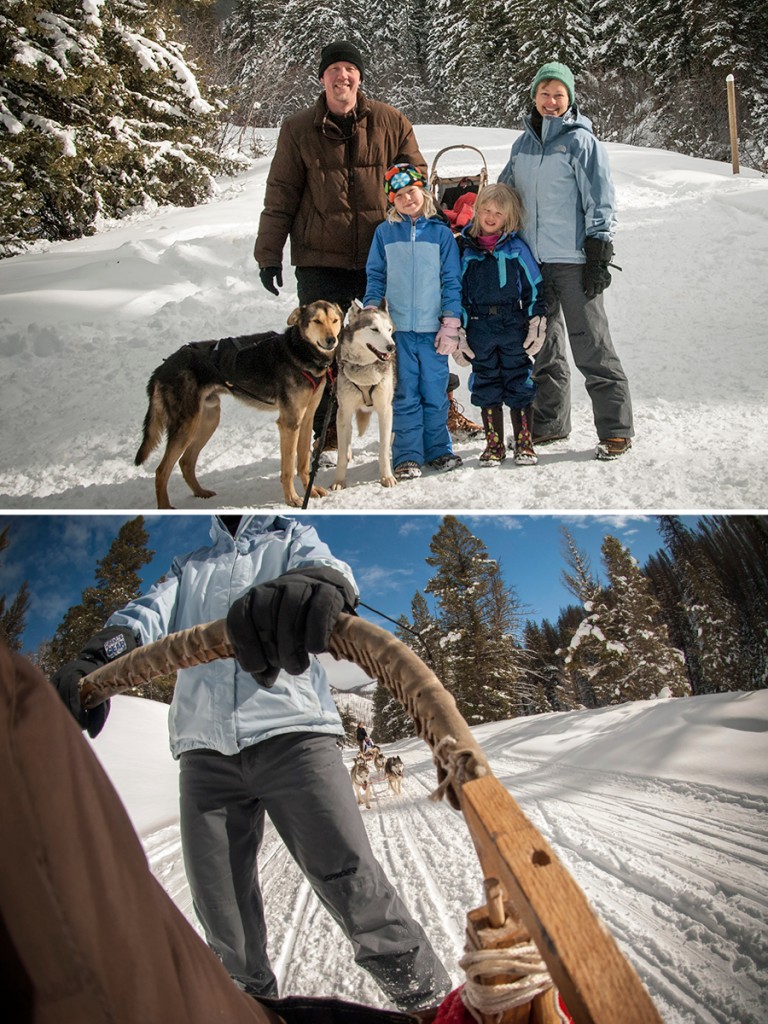 Then, the real shocker: “Okay, so, who wants to drive first?” It sort of felt like the pilot of your 747 asking you to go ahead and take the stick—and in fact airliners seem more predictable than a bunch of barking, fighting, peeing creatures all tied to each other. and you. Somehow by default (this happens to dads a lot, I have noticed) I was chosen to try driving first, and was put in the driver’s seat (or more accurately, told where to stand on the back runners). They said (loudly, to be heard over the dogs) to keep my foot on the brake (which was basically a pick-like thing that tenuously kept the sled from rocketing forward) until they gave the word. Well, the word came quickly and off we went—and off went the barking. The change to relative silence was astounding. It was like when you push play on Finding Nemo in the midst of a multitude of toddlers; attention drawn, happy silence.

Moving at a brisk (fast jog?) pace, we glided along the serpentine mountain trail with really not much work to be done by the driver (me) other than to enjoy the scenery and check on my passenger, who was the birthday girl. The rest of the journey was an entertaining mix of just breezing along, taking turns driving, occasionally stressing about the proximity to drops to the creek bed below—but mostly being wowed by the passing scenery and new experience. 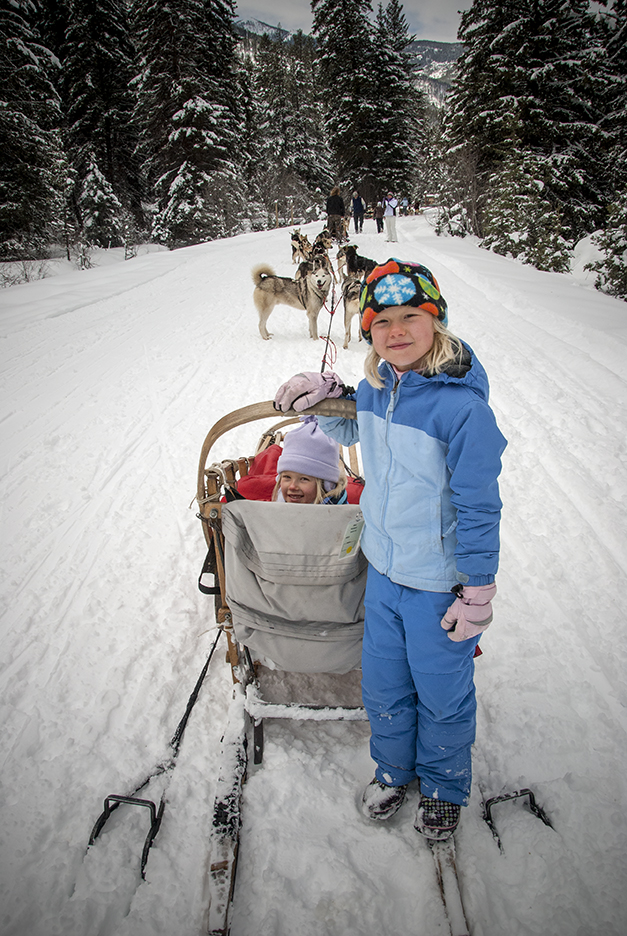 At the end of the trek, we asked the guides if we could pet some of the dogs, which now seemed significantly more approachable after a tiring jaunt (and having barked their vocal chords into submission whenever we stopped). It turns out that these dogs, mostly Siberian Huskies, are serious working dogs, and many of them are not really interested in a scratch behind the ears. However, we were directed to a few less hard-wired animals that did appreciate some personal attention, and our daughter immediately became pals with several of the dogs on our team. 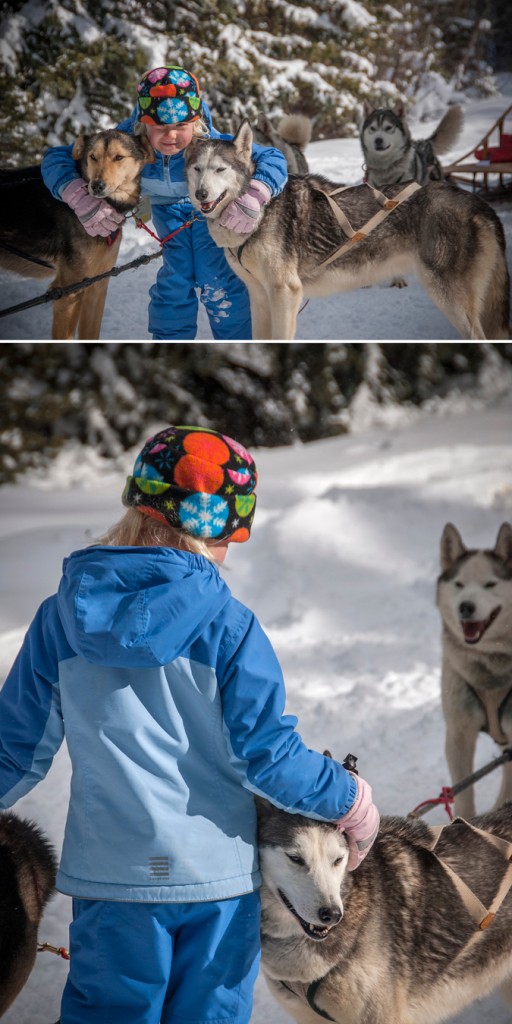 Macy thanks the dogs for a good trip.

Overall the adventure was—while maybe a bit more ‘dynamic’ than we had expected—one that we were all glad we had checked off the ‘gotta try that some time’ list. The birthday girl was thrilled with her special day, which was of course the goal. As for the parents, the post-trek soak and cocktails back at Chico felt just a little more special than usual, too.